Patrik Laine was given every opportunity to clarify his standing with the Winnipeg Jets.

After the star sniper’s agents suggested publicly in the fall it might best for both parties if he was traded, the questions about his future in the Manitoba capital came in rapid-fire succession Monday.

Laine sat at the podium and answered each one. What he didn’t offer was a straight answer, instead ducking and dodging like a player of his ilk seeking out a prime scoring chance.

“Well, I’m here aren’t I?” Laine began following the Jets’ first on-ice sessions at training camp. “That’s the only thing I’m worried about right now. I’m not in charge of what other people are saying. I don’t worry about that stuff. Even Wayne Gretzky got traded.

“I’m just worried about working hard here, being the best player I can be, and helping these other guys be at their best.”

But was he aware his representatives were going to make those comments?

“I don’t pay attention to that stuff,” said the 22-year-old Finnish winger. “That’s just one of those things. I’m just worried about this moment.”

The next reporter on the video conference call took another shot, asking why his agents indicated it would be “better” for him to leave Winnipeg?

“I didn’t say it,” Laine responded. “I’m just here. I just want to play. I’m just worried about working hard, doing my job, which is trying to be the best player I can be. And I’m not worried about all the talk and all the speculation.

And finally, did he previously – or does he currently – want to be traded?

“Not something I think about,” Laine said. “I only worry about what’s going on today. I don’t worry about tomorrow. Right now I’m here. I’m excited to play. I’m in good shape. I’m going to be a new player this year, and just want to play well this year. That’s going to be best for both parties.

“What happens in the future, that’s not even my call.”

While the way he went about answering speaks volumes compared to the words themselves, Laine is undoubtedly a special talent.

He scored a combined 80 times over his first two NHL seasons – two shy of league leader Alex Ovechkin – but took a step back in 2018-19 with just 50 points.

Laine made subsequent comments about his linemates, role and deployment, which led to rumblings he might want to follow the likes of Evander Kane, a young player who previously forced his way off the Jets’ roster, out the door.

But Laine responded in 2019-20 with a renewed commitment to playing a more well-rounded game, finishing with 28 goals and 63 points in 68 contests before the schedule was halted because of the COVID-19 pandemic.

Laine then hurt his hand in Game 1 of Winnipeg’s qualifying round series against the Calgary Flames, which the Jets lost in four while also dealing with a significant injury to No. 1 centre Mark Scheifele.

All that matters is between whistles, and he was thoroughly impressed with Laine’s play and attitude Monday with the Jets’ regular-season schedule in what should be a chaotic 56-game sprint in the all-Canadian North Division set to open Jan. 14.

“I find it’s far more valuable just to watch,” Maurice explained. “He practised like a man. He was hard, he was fast, he was as good as I’ve ever seen him practice. So I’ll judge that. He’s here, he’s in a good mood, he was fun to watch.

“He’s committed to being a great player.”

Laine, who signed a two-year, US$13.5-million bridge contract prior to last season, is also set to once again become a restricted free agent this summer, with Winnipeg retaining his rights, so this story isn’t going anywhere.

Jets captain Blake Wheeler has past experience with similar rumours, but said what’s talked about in the media and amongst fans, and what’s discussed in the locker-room, are two different things.

“I want what’s best for Patty since the day he’s gotten here,” said the 34-year-old set to begin his 13th NHL season. “I want Patty to lead the league in goals. I want all the things that are within his capabilities.

“But first and foremost, we want all those things in conjunction with our team having success.”

Wheeler said that in the end, that trumps all.

“Does losing Patrik Laine make us a better team? Probably not,” he said. “It’s unfortunate that things happen, and maybe sometimes you’re in a small Canadian market and there’s nothing else really to talk about other than things of this nature, but Patty makes us a better team.”

The Jets re-acquired Paul Stastny from the Vegas Golden Knights in an effort to bolster their top-6, and the veteran centre found himself skating between Laine and Kyle Connor on Monday.

It was even suggested during the subsequent media availabilities the return of the 35-year-old, who was with the Jets during their 2018 run to the Western Conference final, was an attempt to placate Laine.

“There’s always noise around teams,” Stastny said. “Those are things that are out of our control. As players we just have to go out there and do what we can.

“When you try to focus on other things and try to control things that are out of your hands, you lose focus on what you’ve got to do.”

And for now, that’s getting ready for a season that truly will be like no other – with Laine firmly in the fold.

“When what a player wants intersects with what’s best for the team, then everybody gets what they want and it all falls in line and in place. After watching him skate (Monday) I wouldn’t put a ceiling on what this young man is capable of doing.”

But the question remains: Will Laine be doing it much longer in Winnipeg? 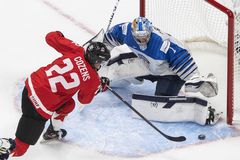 NHL believes it can play games in all seven Canadian markets amid second COVID-19 wave
December 24, 2020 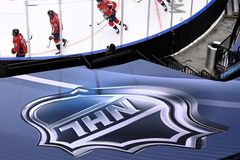 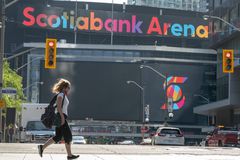