The Washington Wizards found new life at home on Friday night, delivering a message to the Toronto Raptors that they’re not rolling over in this series.

Bradley Beal rebounded from two sluggish games with a huge 28-point night, while his all-star backcourt mate John Wall added 28 point and 14 assists to pick up the Wizards’ first win in the first-round playoff series 122-103, narrowing Toronto’s lead to 2-1.

DeMar DeRozan had 23 points in the loss for the turnover-troubled Raptors, while Kyle Lowry had 19.

“You can’t turn the ball over 19 times for 28 points,” said Toronto Coach Dwane Casey. “Your hat has to go off to Washington; they came out and punched us and we allowed them to. Nineteen turnovers, they shoot 55 percent, that’s the ball game.”

There were reasons to believe the Wiz could win one. They’d been down 0-2 to the Boston Celtics in the Eastern Conference semi-final a year ago, before coming back to win the next two games in a series the Celtics would need seven games to win.

Beal was ripe for a bounce-back performance after coach Scott Brooks had called him out for poor shooting and not enough aggressive play. And the series was finally shifting from Toronto to Washington. Brooks considered changing his starting lineup, but ultimately didn’t, giving his starters a vote of confidence.

The seats inside Capital One Arena were covered in red and white “Rep The District” T-shirts, organized to read “Rep DC”. A 14-year-old boy in a Wizards jersey belted out a commanding version of The Star-Spangled Banner, as if to throw down the gauntlet.

The arena public-address system gave the Raptors plenty of good-natured ribbing. It serenaded the Raps with Michael Bolton and Billy Ray Cyrus songs during warmup, and even the Macarena. The Wiz radio guy chided “We The District” on the videoboard. The Kiss Cam featured a sad file photo of Drake, with no one to kiss.

Small pockets of Raptors fans could be heard hollering after Toronto buckets. They proudly wore their jerseys or their Buffalo plaid, waved We The North flags.

Less than three minutes into the game, a scuffle erupted between OG Anunoby and Markieff Morris, and both players were slapped with technical fouls.

The Raps established an early lead on the strength of 10 fast points from DeRozan. Toronto held the lead until a frenzied sequence late in the quarter served as a turning point.

It began with Bradley Beal orchestrating a steal off DeRozan. When Beal tripped on his way to the basket, teammate Kelly Oubre Jr. scooped up the ball and slammed down a monster dunk. Oubre then drew Jakob Poeltl into a foul, C.J. Miles missed a dunk, and DeRozan had a shot blocked. Amid Toronto’s flurry of negatives, Beal hit a pair of threes and put his Wizards ahead 30-29 going into the second.

The Raptors chose to sideline Fred VanVleet once again, as the reserve point guard continues to heal his injured right shoulder. Toronto’s Bench Mob would have to go on without him.

Washington’s lead ballooned to 13 as Beal seemed to be on a mission, hitting shots from all over the floor. Wall exploded too, scoring on driving layups and pullup jumpers while also dishing out a flurry of assists. The Wiz took an eight-point lead into the locker room.

Lowry earned the wrath of the Washington faithful early in the third as he lept up to stop an airborn Beal and his hand smacked the side of Beal’s head. It earned the Raps point guard a flagrant foul.

Another scuffle ensued as Beal tried to wrestle a ball away from Jonas Valanciunas, which brought both lineups in a mild skirmish. Wall blurted out something, and Ibaka reacted by lurching at him. As technicals were assessed to Beal, Wall and Ibaka, the arena blared Born In The USA.

Marcin Gortat, who had underperformed in the first two games and nearly cost himself the Game 3 start,was dominating in the paint as Wall continued to deliver him some jaw-dropping passes. Washington was making shots at stellar rate, and Toronto couldn’t hit much at all. Gortat had 16 on the night.

“Brad got off and played well, John got himself going, Gortat got some easy ones, Mike Scott got easy ones. But John and Brad are the heads of the snake,” said Lowry. “And we’ve got to cut them off.”

The Raps tried using the size of seven-footer Lucas Nogueira and a fresh look from G-League point guard Lorenzo Brown. But nothing seemed to go Toronto’s way.

At the end of a physical playoff contest, DeRozan left with a bandage under his eye. Pascal Siakam needed stitches in his lip.

The Raps tried using the size of seven-footer Lucas Nogueira and a fresh look from G-League point guard Lorenzo Brown. But nothing seemed to go Toronto’s way.

At the end of a physical playoff contest, DeRozan left with a bandage under his eye. Pascal Siakam needed stitches in his lip.

“I thought our crowd was a big part of our win,” said Washington Coach Scott Brooks. “That was fun and a really a great environment. We needed every ounce of the energy that they gave us and our guys responded. All of the guys played well. It’s a good thing that I didn’t listen to [the media] and not start our starting center [Marcin Gortat]. I thought he played well.”

The Raptors suffered 18 turnovers in the loss. They’ll have to wait until Sunday to play Game 4. 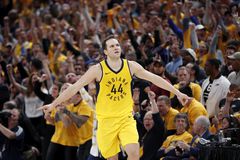 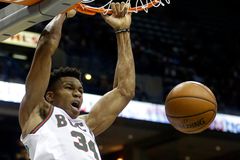 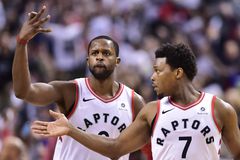