The Toronto Wolfpack celebrate their inaugural “Forces & Families Day” on Saturday at Lamport Stadium, honouring the military as they host Barrow Raiders in search of their 20th straight win.

The 49-year-old McDermott, who applied to join the marines at 16, says his military service helped make him the man he is today.

He served tours in Iraq and Northern Ireland during his five-year stint.

“It’s something I’m extremely proud of,” McDermott said. “I don’t carry it around with me all the time. It’s not constantly there. I don’t wear it on my sleeve all the time and there’s no need to do so – it was such a long time ago. But at the same time I don’t think there’s a day goes by that where I don’t think about it.

“You can’t do something like that without it being there all the time.”

The Wolfpack coach says there are times in a contact sport where the synergy of serving in the military rings true.

“There are some moments on a sports field … [where] for a small snapshot that you’ve got to go do a job that you know, should you follow through with it, you’re probably going to come off worse. Pain, certainly. Injury, a hell of a lot likely. And serious injury, that sometimes happens as well.”

“But they follow through with it,” he continued. “And just for that small snapshot – and that just lasts 15 seconds for our players – they’ve tapped into what it’s like for most blokes in the military when they do their job at the extreme level.

“It’s a humbling thought to have that you’ve got a group of men – and I’m not overdoing this, I think, it’s true especially in the current world – they do their bit so we can do this,” said McDermott, waving his hand at the Lamport playing field. “We can walk free and talk freely. … It’s great that we can in some small part say ‘Thank you and [we] appreciate what you do for us.'“

McDermott isn’t one to share war stories with his players, however. He keeps those to himself.

Instead, this week he showed his players video of Dave Wottle’s dramatic win in the 800-metre final at the 1972 Olympics. Last after 500 metres, the American hit high gear and amazingly maintained it for the rest of the race, speeding through the field to beat Yevgeny Arzhanov of the Soviet Union by 0.03 seconds.

For McDermott, it’s a lesson in “being as good as I can be, not the competition.”

In their third season, the Wolfpack (24-1-0) have been the gold standard in the second-tier Betfred Championship. They have already clinched the regular-season crown and have not lost since March 9, when they were beaten 46-16 on the road by Toulouse Olympique.

Toronto entered weekend play with a 12-point lead in the standings over second-place Toulouse. The Wolfpack wrap up regular-season play Sept. 7 against the visiting Leigh Centurions.

The top five teams in the Championship will then enter the promotion playoffs with Toronto securing a bye to the semi-finals thanks to topping the regular-season standings.

The Wolfpack, whose bid to reach the top-tier Super League ended at the final hurdle last season in a 4-2 loss to London Broncos, will host the Sept. 22 semi-final. A win moves Toronto into the Oct. 5 Grand Final. A loss and the Wolfpack have a second chance to advance via a second semi-final.

The last team standing secures promotion to the Super League.

With 24 tries this season, Wolfpack winger Matty Russell needs just three tries to equal the team record. Liam Kay, who has seven tries in an injury-interrupted 2019, set the mark in 2017.

Jamie Dallimore is one appearance away from reaching 100 games for the semi-pro Raiders.

The Toronto Scottish Regiment will host a military display Saturday with Canadian Armed Forces vehicles on display prior to the game. A Sikorsky Cyclone CH-148 helicopter will perform a flyover during the game. 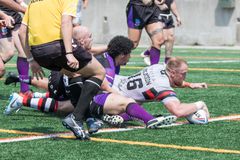 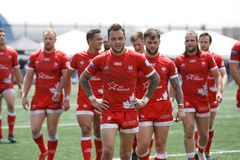 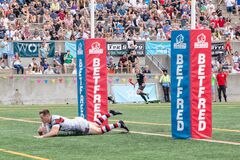