On Wednesday afternoon, the final day of a horrid season for the Toronto Blue Jays, Alex Anthopoulos will sit down in a meeting room at Rogers Centre and discuss what has gone wrong and what has gone right.

During his annual season-ending meeting with members of the media, the 35-year-old general manager is expected to focus on the state of the team's starting pitching rotation, which was the major factor behind Toronto's struggles this year.

After a season that began with so much promise, the Blue Jays will instead finish with a losing record, their hopes to contend for their first playoff spot since 1993, the last time they won the World Series, washed up weeks ago.

Heading into the off-season, Blue Jays manager John Farrell said there is little doubt in the upgrades he would like to see his GM make for 2013 in order for Toronto to be competitive.

"Same as a year ago – starting pitching," Farrell said on Tuesday.

When Jose Bautista is healthy – which he wasn't for a large chunk of the 2012 season – the Blue Jays can brag they have one of the top offensive units in baseball.

But Farrell said that can carry a team only so far.

"You look at the teams in the playoff hunt, they've pitched very well," Farrell said. "I don't know the order of team ERA or lack of blown saves or anything like that, but they pitch.

"Not every team is going to be the New York Yankees and lead the league seemingly every year in runs scored. But it comes down to pitching."

The Blue Jays will argue, and justifiably so, that the incredible run of injuries the team suffered, especially to its pitching staff, is a major consideration when looking at the overall record.

During one bleak week in June, the Blue Jays lost three-fifths of their starting rotation when Brandon Morrow, Kyle Drabek and Drew Hutchison all went down with injuries.

While an oblique muscle injury sidelined Morrow for more than two months, Drabek and Hutchison were both lost for the season after suffering elbow injuries that required surgery.

While Drabek's return is not anticipated until June at the earliest, Hutchison, whose surgery was delayed, might wind up missing the entire 2013 campaign.

It is no wonder the Blue Jays used a total of 31 pitchers this season, a club record.

When you combine all that with an unexpected decline in the abilities of Ricky Romero, the former all-star who at one point lost a team-record 13 straight decisions en route to a 9-14 record, Toronto's mound miseries were deep indeed.

"This year was overwhelming at times," Bruce Walton, the Toronto pitching coach, said.

Through 160 games, the Blue Jays' starters are struggling with a 4.86 ERA, fourth highest in the American League. Opponents have enjoyed hitting against the Toronto rotation, boasting a .267 average, the fifth highest mark in the AL.

Toronto's starters also lead the majors with 364 walks, and their strikeout to walk ratio is an unseemly 1.72, baseball's lowest mark. The major-league average is 2.55.

While the Blue Jays have been unable to pinpoint exactly what went wrong with Romero, he was unable to command his pitches, especially his fastball, as he did a year ago when he went 15-11 with a .292 ERA and made the all-star team.

This year, the left-hander's ERA soared to 5.77 to go along with a WHIP (walks and hits per innings pitched) of 5.77, both numbers the worst among qualified AL starters. Romero also led all pitchers with 105 walks in his 181 innings pitched.

"I think he was just trying to be too fine and really get outs, early outs, and he would miss down and miss down and, all of a sudden, he would find himself down in the count," Walton said. "And when he tried to fight back, here comes that base hit that would score the two runs.

"That's just the kind of year he had."

The Blue Jays will be counting on Romero turning things around for next season and be part of one-two solid punch at the top of the rotation along with Morrow, who appears to have recovered nicely from his injury.

Morrow, 9-7, shut out the Yankees on Sept. 27 in his last start, a dominating performance in which he allowed just four hits over seven innings in a 6-0 Toronto win.

Morrow and Romero are the only pitchers who can count on jobs heading into next season, according to Anthopoulos.

Henderson Alvarez, the only Toronto starter to play a full season, should also be in that mix after going 9-14 in his 31 starts as a 22-year-old.

After that it will be up to Anthopoulos, who has gone on record stating his priority this off-season is to add some quality starting pitching to the roster, be it through free agency or trades.

"Any way that we can acquire players," Anthopoulos said on Tuesday. "The trade route is always the preferred route, but that's not to say that we're going to ignore free agency." 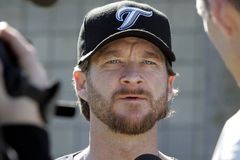 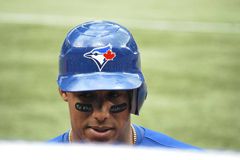 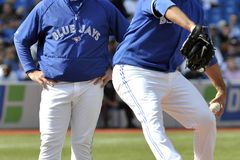