In place of on-field baseball action postponed by the COVID-19 pandemic, The Globe and Mail brings you a computer-simulated tournament involving four of the greatest Canadian teams in history, using the statistics-based software of the sports-game company Strat-O-Matic. The first-round best-of-seven-game series pits the 1985 Blue Jays against their World Series-winning counterparts from 1993, while on the other side of the bracket, the 1981 Expos take on the 1994 Montreal squad. Today’s matchup is Game No. 2 of the all-Expos series.

The lovable Montreal Expo mascot Youppi! wasn’t up to his antics for the second game of the series between the 1981 Expos and the 1994 team. In fact, he wasn’t around at all for a match in which the 1994 side shut down the 1981 team 3-0, behind the devilish pitching of Pedro Martinez. The grotesque, furry Sesame Street knockoff was the victim of an ailment that most people would not consider significant. But when it happens to someone who has to wear a heavy, barely ventilated full-body costume, the pesky malady is an issue. Youppi! had a heat rash.

The lack of a mascot was noticeable in Olympic Stadium, where an announced crowd of 33,169 witnessed a game that never seemed in doubt. Martinez, a 22-year-old native of Manoguayabo, Dominican Republic, was electric and in full command, striking out eight batters and allowing just five base runners in eight innings.

Actually, it’s four base runners if you don’t count Andre Dawson reaching first base on a fielding error by Larry Walker. But Martinez does count it.

“If one of my teammates makes an error, I am responsible," Martinez said in the locker room after the game. "I let the batter hit the ball.”

Martinez was acquired by general manager Dan Duquette in an off-season trade that sent popular second baseman Delino DeShields to Los Angeles. Last year, the Dodgers used the rookie Martinez primarily in relief. Duquette, though, brought the skinny kid to Quebec as a starter.

“I think Pedro’s size, or lack of it, told him early on in his life that he was going to have to fight for everything that he was going to accomplish,” Duquette said during a postgame news conference. "And he takes that attitude into his pitching with his fearlessness.”

On the season, his first in the majors as a full-time starter, Martinez wracked up 11 wins against five losses. He struck out 142 batters in just more than 144 innings pitched. In Game No. 2 against the team from 1981, Martinez lasted into the ninth before being replaced for the final three out by closer John Wetteland, who notched his second save in as many appearances.

Losing pitcher Bill Gullickson was hit pretty hard. He allowed 11 hits and two walks in seven innings. The 1994 Expos went on top for good In the second inning, plating one base runner on three hits. The early run support proved sufficient for Martinez.

There was excitement in the bottom of the sixth inning when 1981 centre fielder Andre Dawson made a spectacular play on a long drive by 1994 second sacker Mike Lansing. Backing against the fence, Dawson lept high. To borrow a phrase from the late sportswriter Red Smith, Dawson stayed aloft so long he looked like an empty uniform hanging in its locker. When he came down, he had the ball.

In the seventh-inning break, with no mascot in sight, a hot-dog vendor did an impromptu dance to Kool & the Gang’s Celebration on one of the dugout roofs. This even amused baseball commissioner Bowie Kuhn, not known to approve of hi-jinks (or even low jinks).

Tomorrow, The Globe and Mail will run a game report and boxscore of Game No. 3 of the Toronto side of our computer-simulated tournament. The 1993 Blue Jays lead the series 2-0 over the 1985 edition. Scheduled starting pitchers are 1985′s Doyle Alexander and Pat Hentgen for the Jays of 1993. The winner of the best-of-seven series will face the victors of the matchup between the Montreal Expos teams from 1981 and 1994. The last team standing wins the Macdonald-Cartier Cup. 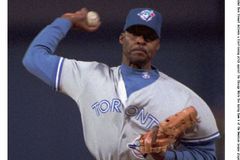 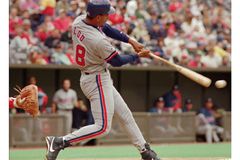 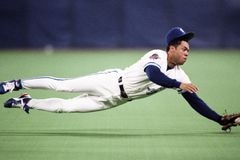