The Angels said Ohtani had an MRI on Wednesday in Texas that revealed the problem in his right ulnar collateral ligament.

“There’s more questions out there right now than answers. We’ll take it one step at a time,” manager Mike Scioscia said. “There’s a lot of consulting that Shohei will do with doctors and just see what the best course of action is, and we’ll see where we are.”

The 24-year-old rookie was the Angels’ designated hitter for their series finale against the Rangers, and walked his first time up. Asked whether Ohtani would stay in the lineup as a DH after this game, Scioscia said: “We’ll see. That’s going to be determined from our medical department.”

Angels general manager Billy Eppler said Ohtani hasn’t formally decided to have Tommy John surgery. Eppler and Ohtani plan to have an in-depth conversation about his future Monday after the Angels return from their road trip.

“We committed to each other in this process, and we will get through it together as a team,” Eppler said. “But I do feel disappointment for the people in that clubhouse, and primarily Shohei.”

The latest development has been dreaded by the Angels and Ohtani’s millions of fans since he was diagnosed with a sprained UCL following a start June 6. After receiving a platelet-rich plasma injection and an injection of stem cells, he was hitting again in early July, and he returned to the mound with his start Sunday at Houston.

Ohtani lasted only 2 1/3 innings in that start against the Astros, and he had a drastic drop in velocity during the game. He had been scheduled to throw a light bullpen session Wednesday, but never did after reporting that his elbow was sore. The medical staff then decided that he should get the new MRI.

The Angels and Ohtani clearly took a well-calculated risk in allowing the right-hander to pitch again this season after the Grade 2 sprain of his elbow ligament was discovered. Mindful of the typical recovery timetable from Tommy John surgery, they elected to see whether Ohtani could pitch again during a time frame when he would still likely miss only one full big league season, allowing him to conceivably return in 2020.

Eppler declined to confirm any such math, but the Angels realized the attempt to treat Ohtani’s elbow with rest and injections might not work.

“It was something that we felt could happen, but we wanted to take a more conservative approach at this moment in time, and did that,” Eppler said.

Although Ohtani is enjoying success as the Angels’ designated hitter, Eppler flatly declared that the Angels still see Ohtani as a two-way player, however long they must wait for his pitching career to resume.

Eppler declined to speculate on when Ohtani could return to the lineup as a hitter in 2019 if he had Tommy John surgery soon, noting that Ohtani hasn’t even decided whether to get it done. Other position players have returned to hitting after Tommy John surgery within roughly six months of the procedure, but Ohtani’s case could be different because of his pitching abilities.

“I’m sure at some point he’s going to resume his pitching career,” Scioscia said. “When that is depends on whatever the course of action is.”

“We’d love to have him a whole season, but I think that taking a little half-step back here and seeing him pitch for a whole career is more important than looking back and saying ”what if?’“ he said.

The injury puts a decided damper on one of the most exciting rookie seasons in big league history.

Ohtani hit his 16th homer Tuesday night, his first against a left-hander in the big leagues. He had already joined Babe Ruth as the only players ever to hit 15 homers and pitch 50 innings in a season.

Last fall, Ohtani was diagnosed with a sprained elbow ligament while in Japan. Major League Baseball teams were advised of his condition before they could bid on his rights.

The Angels paid the $20-million posting fee to Ohtani’s previous club, the Nippon Ham Fighters. Ohtani, who is under the Angels’ contractual control for six years, signed a minor league contract and got $2,315,000 in international bonus money from the Angels.

On Monday, Scioscia said Ohtani had been evaluated after coming out of his pitching return early and that there was no apprehension about the elbow. The manager said then that Ohtani was dealing with tightness in his back and a sore right ring finger after a ball deflected off of it during that game, but that the elbow felt great.

“When he was getting evaluated, there was obviously a little bit of soreness there,” Scioscia said Wednesday. “I don’t know if Shohei thought it was normal just from not having pitched for a while.” 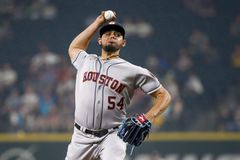 Opinion
The Blue Jays' awfulness is now a matter of fact
September 3, 2018 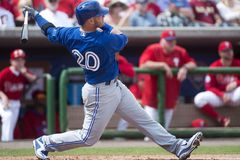