Trent Thornton bounced back from the worst outing of his career in a big way.

The rookie right-hander pitched six scoreless innings to help the Toronto Blue Jays down the Baltimore Orioles 6-1 on Sunday, avoiding a three-game sweep heading into the All-Star break.

“You just have much smaller room for error up here,” said Thornton, who was coming off a loss to the Boston Red Sox in which he allowed seven runs on 11 hits in 2 2/3 innings. “Guys hit mistakes, and guys hit good pitches here too. In my mind, it is extremely important to get ahead in the count and make guys swing at your pitches.”

Thornton, 25, allowed just three hits and struck out five over an 89-pitch outing.

Manager Charlie Montoyo was happy with Thornton’s performance and is hoping for more of that in the second half of the season.

“Our pitching has to get better, our starting rotation,” Montoyo said. “Our bullpen has been good. Going into this break, I like the way our team is playing.”

The Blue Jays hit the break after a 5-5 homestand, but they dropped two-of-three games to the worst team in the majors, the Orioles (27-62).

Lourdes Gurriel Jr. hit his team-leading 16th home run in Sunday’s win. Teoscar Hernandez drove in a pair of runs for the Blue Jays, who snapped a three-game slide, and Danny Jansen and Rowdy Tellez added an RBI apiece.

Vladimir Guerrero Jr., who will compete in the Home Run Derby in Cleveland Monday night, had two hits and scored twice.

The Blue Jays, with a roster full of rookies, endured growing pains and inconsistent stretches in the first half.

But veteran Justin Smoak said many of Toronto’s first-year players have improved in the past month.

“We definitely have some guys who can be superstars in this game,” Smoak said. “I think Gurriel has shown that. I think Vladdy has shown that at times. But I feel he’s going to be a guy who will do whatever he wants for a very long time.

“A guy like Teoscar, he can do anything on the baseball field he wants to. That’s something once it clicks for him he’s only going to get better.

“Biggio has had some of the best at-bats in the last few weeks or since he’s been here. Danny Jansen is starting to swing. Hopefully, from top to bottom, these guys just continue to get better.”

Montoyo, 53, is in his first year as a big league manager. Besides teaching, his most significant task has been to keep his team in the right frame of mind.

“He’s been good,” Smoak said. “I feel like, especially early on with how some of the games went and losing a lot of games, it definitely cannot be easy. One of the things he’s basically told us was to keep going out there and have fun.”

Thornton retired the Orioles in order in the first inning and then was spotted a 2-0 lead after Gurriel smashed a two-run homer into the second deck in left field for his team-leading 16th. Toronto shortstop Freddy Galvis was aboard after he had drawn a one-out walk.

The Blue Jays increased their lead to 3-0 in the fourth inning and enjoyed a comfortable 6-0 margin after six innings.

Guerrero Jr. led off the fourth with a double to right centre and scored on Jansen’s double to left centre.

A single from Guerrero, a walk to Smoak and a sacrifice fly from Jansen put runners on first and third with one out in the sixth inning. Tellez pushed Guerrero home with a double and Hernandez knocked in Smoak and Tellez with a single to left field.

Notes: Blue Jays reliever Ken Giles was named to the American League All-Star team on Sunday as a replacement for the injured Marcus Stroman (left pectoral cramp) Giles is seventh in the AL with 13 saves in 14 opportunities Stroman was named to his first All-Star Game last Sunday. Toronto recalled pitcher Justin Shafer from the triple-A Buffalo Bisons and optioned outfielder Jonathan Davis to the Bisons on Sunday. 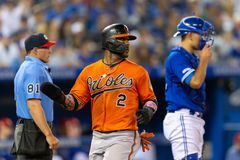