Guerrero spent a lot of his time shedding weight, certainly looking fit and trim in pictures posted on his Instagram account. The 21-year-old has reportedly dropped 40 pounds from last season.

That certainly bodes well for the Blue Jays, who have pitchers and catchers arriving at camp this week. The team’s first full-squad workout is set for Monday.

“It’s incredible to see the smile on his face, the shape he’s in, how his routine has developed and how it’s become his own,” Atkins said of Guerrero on Friday during a Zoom call with reporters. “Every day this off-season he’s got better, he looks great, he’s in a really good position.

“I’m really excited to see how that’s going to impact every aspect of his game this year.”

The 6-foot-2 Guerrero, whose weight is listed at 250 pounds, had nine home runs and 33 runs batted in last year while appearing in all 60 of Toronto’s games. The Jays posted a 32-28 record in the pandemic-shortened 2020 season to secure the eighth and final spot in the expanded American League playoffs before losing to Tampa Bay.

Guerrero Jr., the son of Hall of Fame outfielder Vladimir Guerrero, made his much-anticipated major-league debut in 2019, hitting .272 with 15 homers and 69 RBIs in 123 games. He was sixth in voting for the American League’s Rookie of the Year award.

“Vladdy is special,” Atkins said. “What he’s able to do with his athleticism when he’s maximizing it and his swing are really fun to watch.”

Atkins can see Guerrero’s off-season work paying off in 2021.

“If you think about the reps it takes and how many swings they [hitters] will take before they get into a batter’s box ... so much of it is about the athleticism that you can repeat,” he said. “So the better shape you’re in, the more repeatable things are going to be because you’re able to repeat them more in your practice.

“Hitting is in some ways, and I think, is harder to evaluate, assess and project and predict or study than pitching because it’s so dynamic and you don’t know what the hitter’s thinking. You always know what [pitchers] were trying to do, based on the outcome, where the catcher is set up ... but with a hitter you don’t.”

The expectation is Guerrero will see time at third base during spring training. He was used exclusively at first and as a designated hitter last year.

As well, Lourdes Gurriel Jr., who played left field in 2020, will get reps at first and third. Atkins said spring training is an ideal time for players to get time playing different positions.

“I think we have to envision all of those things and think about all of those potential scenarios that could occur,” Atkins said. “In an ideal world we don’t need to see that for an extended period of time because that means everyone is healthy, everyone is playing the positions they’re accustomed to.

“It also creates different late-game decision-making opportunities for Charlie as he thinks about pinch-running, pinch-hitting and what that means for repositioning and realigning our defence,” Atkins said.

The Blue Jays’ first exhibition contest is Feb. 28 in Tampa against the New York Yankees. 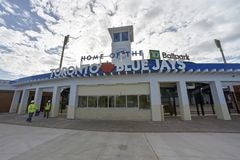 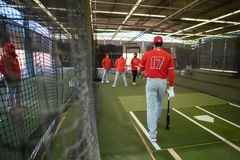