Rowdy Tellez homered and hit a go-ahead two-run single in a seven-run sixth inning, and the Toronto Blue Jays rallied from a seven-run deficit to beat the Philadelphia Phillies 9-8 and sweep a doubleheader on Thursday.

In the first of the seven-inning games, Lourdes Gurriel Jr. chopped a single over a drawn-in infield in the seventh to give Toronto a 3-2 win.

The Blue Jays made the most of a one-day visit to their adopted Buffalo home in between trips to Baltimore and Tampa Bay.

“We were thinking we had a chance,” Toronto manager Charlie Montoyo said. “The guys were believing the whole time, even though we were down by seven. … It’s almost like we’re home now.”

Phillies shortstop Didi Gregorius committed a costly two-out error, one of two by Philadelphia’s infield in the sixth, to set up Tellez’s Game 2 heroics.

Tellez appeared in both games after being struck in the face by a passing runner on Monday at Baltimore, and stayed in the second game after reaching for the back of his leg on a third-inning single.

“He cramped up running to first, but he was fine,” Montoyo said. “It was great to see him have a game like that after missing a couple of games.”

The Phillies jumped out to a 7-0 lead in the first inning. Andrew McCutchen hit a three-run double to cap off the frame after singling and scoring earlier.

Teoscar Hernandez hit a two-run homer in the first for the Blue Jays, who didn’t shrink the deficit any further until the sixth. Gurriel hit a three-run homer, and Danny Jansen scampered home on a wild pitch by Hector Neris (1-1).

Anthony Kay (2-0) worked an inning of relief for the win as Toronto (12-11) extended its winning streak to five games. A.J. Cole recorded his first save, getting Roman Quinn to strike out after allowing an RBI single to J.T. Realmuto.

“It’s not like we’ve not been playing good baseball, you know?” Gregorius said. “We’ve got to put the best foot forward all the time, that’s the best we can do.”

Trent Thornton came off the injured list to start the game for Toronto, and recorded only two outs while yielding five hits and a walk.

Vince Velasquez settled down after Hernandez’s homer and struck out seven while allowing five hits over five-plus innings. He retired 13 of 14 batters before Tellez homered to start the sixth.

In the opener, Cavan Biggio tied the game with an RBI double in the sixth and Jordan Romano (2-1) worked the seventh to earn the win. Bryce Harper homered and McCutchen added an RBI single for Philadelphia. Deolis Guerra (1-3) took the loss.

Prior to Gurriel’s game-winning hit, Vladimir Guerrero Jr. hit the ball twice on one swing for a single, and the added spin may have caused centrefielder Ramon Quinn to mishandle the ball and advance Hernandez, who scored the eventual winning run, to third.

Baseball Commissioner Rob Manfred was in attendance for the first time since Sahlen Field took its place as the Blue Jays’ home for the shortened season. He was seen before the first game walking in front of the first-base dugout toward the foul-territory bullpens, but did not speak to reporters.

IT’S BEEN A WHILE

The games were the Phillies’ first in Buffalo in nearly 135 years. Philadelphia played the Buffalo Bisons, then in the National League, on Sept. 19, 1885 at Olympic Park. A few months earlier, on July 4, the Phillies swept the Bisons in the last doubleheader they played in the city. In the second game of that twin bill, catcher Jack Clements hit the last home run by a Phillies player in Buffalo before Bryce Harper’s first-inning shot in the first game. Clements remains fifth on the Phillies’ all-time list for homers by a catcher.

Toronto designated OF Anthony Alford for assignment between games to make room for Thornton. Alford, primarily a pinch-running and defensive specialist, appeared in 13 games this season and batted .188 with a home run in 16 at-bats.

Phillies: LHP Jose Alvarez was removed from the field on a cart in the opener after taking a 105-mph line drive to the groin area. Gurriel was the only batter he faced, and Alvarez completed the out with a flip to first base to end the fifth inning. Alvarez was taken to the hospital and released. … INF Jean Segura (hamstring) sat out the nightcap after playing for the first time since being injured Sunday against the Mets.

Blue Jays: Toronto GM Ross Atkins said he was “extremely optimistic” that SS Bo Bichette, on the IL with a sprained knee, will “be a great piece of this team in 2020.” … Atkins also said RHP Nate Pearson, placed on the IL on Wednesday, had an MRI Thursday. Atkins said the team was “not initially overly concerned.”

Blue Jays: RHP Matt Shoemaker (0-1, 5.23 ERA) will look to bounce back Friday in the first game of a three-game set in Tampa Bay. He was ejected at the end of the fourth inning on Sunday against the Rays. 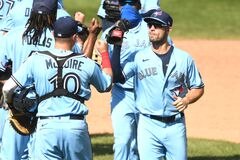 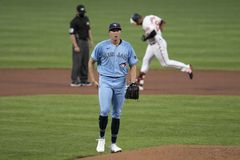