Among the many new things on Bo Bichette’s to-do list, clothes shopping is up there.

“I find myself looking for hoodies more,” the Blue Jays shortstop says over the weekend. People have begun picking him out on the street. The walk from the Rogers Centre to his digs has become something of an amateur paparazzi gauntlet.

“I think it’s the hair they recognize,” Bichette says. “It could be the hair.”

Bichette is a Pantene commercial come to life. He’s also – and this is a first for Toronto this year – remarkably good at baseball. The two things together have people a bit worked up.

We’ve now been told for ages that the Jays have some stars coming. Not some players, but some Ted Williams types.

In the fullness of time, that may prove to be true, but Bichette is the first to show up and deliver straight off.

The 21-year-old has been in the bigs for three weeks. In his first game, he had a hit. In his second, he had two. In his third, he had three including a home run. He got on base in each of his first 17 games, which caught some attention. He tied an MLB record for most consecutive games with a double – nine. That put him in Babe Ruth’s postal code.

All the other overadvertised Jays prospects are still just that – prospects. Bichette has sashayed in like he’s Honus Wagner reincarnated.

Two superficial things strike you as different about Bichette (okay, three, but you’ll have to trust me when I tell you that hair really is lustrous).

The first important thing is his size.

The Blue Jays list Bichette, a shortstop, at 6-foot and 185 pounds. Putting it delicately, that is an exaggeration.

Marcus Stroman was not small, but wouldn’t shut up about it. Stroman was short-ish and as wide in the shoulders as a refrigerator. Bichette, on the other hand, is small. Like, elfin.

He’s so slight of frame that whenever you catch him out of the corner of your eye, you think a batboy has decided to run onto the field.

This hasn’t stopped him from showing a nice turn of power. How much of a hitter will this kid be once he actually does weigh 185? (Reaching six feet will require some time on a stretching rack.)

The other thing that stands out is Bichette’s swagger.

“[Young players] are more outspoken than what they used to be,” Jays manager Charlie Montoyo said on the general topic of what’s changed since his day. “When I first got there, you’re quiet, you don’t say anything. Now, they can talk more.”

Bichette is a talker. He’s the sort of person who wanders around greeting all the other guys with an open-handed slap on the chest or a shoulder rub – top moves from the alpha-male body-language lexicon.

Before the pregame stretch, lesser rookies and newcomers to the team sit around the clubhouse at full attention. They’re poised to leap up should anyone come over and wonder how they got in there.

Bichette lounges. He slides down so far in his chair that he’s nearly horizontal. He isn’t scanning the room for threats. He already has the torpid posture of a 10-year vet who’s just made another all-star team.

Part of this may be the famous bloodline (his father is former major-leaguer Dante Bichette). But Vlad Guerrero Jr. and Cavan Biggio – Bichette’s contemporaries in the Good Genes Club – don’t have this ease yet. They still carry themselves like kids – sometimes a little too loud or a little too amped up. They’re aware of being watched. Bichette doesn’t do any of that. He may look like he’s 14, but he feels like he’s 40.

Bichette has been observing the tactical deployment of clichés his whole life, so most of his patter is of the “just excited to be here” variety.

Then he drifts into calling this first three weeks “a dream” and surprises you again.

“Actually, it’s not that,” Bichette says. “This is more like the goal. Well, like a goal. My dream is to be one of the best players who ever lived. It’s not to make it here. That’s just a goal.”

Up until this point, I have been familiar with three sorts of new baseball players.

There are the “do my best for the team” types – guys who will be happy with a career in the majors, any sort of career.

There are the “reach my potential” sorts – those who think they could be good, but aren’t sure enough to lay any claim to the fact.

And there are the “as good as anyone in the game” or “as good as Exceptional Player X” pros – those who know they are great, but aren’t going to stand up and shout about it.

I have yet to encounter a guy who has played 20 games at this level who is willing – however obliquely – to put himself in the conversation with Hank Aaron or Ty Cobb. “Who ever lived” is a line nobody steps over, even those who are among the best players who ever lived. Even Mike Trout doesn’t talk this way.

The funny thing? Standing there in front of Bichette and listening to him say it, it sounds reasonable. The kid thinks he’s going to be Cal Ripken good. Based on very preliminary results, that is not a laughable thing to say.

You don’t need to be an MLB scout to see where he can improve – a little more range in the field, fill a couple of gaps in his swing and, most importantly, get older and bigger. Those are simple problems to solve.

“As fun as these first three weeks have been, I can get so much better,” Bichette says.

The Blue Jays season has been a record-breaking deep-sea dive – just when you think they can’t get any lower, they do.

Some years from now, people will have forgotten all that. Losing seasons never matter. In all likelihood, all that will be remembered of 2019 is that it marked the arrival of a single player.

Were I betting on it, I’d lay serious money that that guy is Bichette. 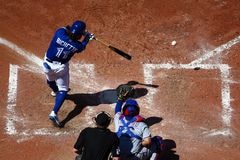 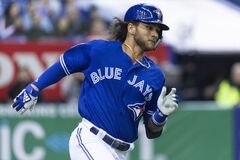