Bruce Dorwart knew his team would be excited to get to the Little League World Series after winning the Canadian championship last weekend.

The Coquitlam All-Stars head coach didn’t expect his players to be quite so eager, though.

“I set my alarm early [Sunday] to leave ]for Williamsport, Pa.] by 6:30 a.m., and all the kids were up well before me, ready to go at 5 in the morning,” Dorwart said with a laugh in a phone interview this week from the annual site of the Little League World Series.

“So I think it’s safe to say reality has hit and everyone is pretty elated right now.”

The Coquitlam, B.C., team, which upset Quebec on Saturday in the Canadian championship final in Ancaster, Ont., opens play Friday against Mexico in Williamsport.

No Canadian team has ever won the Little League World Series. And Coquitlam, which has gotten used to its underdog status after not being favoured to reach the Canadian championship in the first place, is vying to break that drought.

Coquitlam had to first go through perennial powerhouse Whalley – the team that represented Canada at last year’s Little League World Series – just to get out of its own district, and needed a pair of comeback wins en route to claiming the provincial championship.

They rode that momentum into nationals last week, where the B.C. squad rebounded from its only round-robin loss (a 12-2 drubbing by tournament-favourite Quebec) to beat that same team in the final with an impressive 13-strikeout performance from starting pitcher Matt Shanley.

While Mexico provides a stiff test out of the gate for the Canadians – even with Shanley set to take the hill – Dorwart believes his team is up for the challenge after the success they’ve enjoyed over the past few weeks.

Canada has appeared in every Little League World Series since 1952 (the tournament began in 1947), when a team from Montreal made the quarter-finals. A Stoney Creek, Ont., team had the best Canadian showing with a runner-up finish in 1965, but that result predated the two-bracket format introduced in 2001 that splits U.S. teams from international entries.

The winners of both brackets meet in the championship final, which means Canada has to get past several international baseball powerhouses in the double-elimination rounds to advance to the title game.

“It’s tough coming out of Canada,” Dorwart said. “We did exceptionally well to get here, but there’s eight non-American teams and that includes Japan, South Korea, a lot of dominant baseball nations.

“I have a lot of faith in our team. If we can get the first win against Mexico, who knows what can happen from there. But for sure we have a very tough task ahead of us now.”

Coquitlam will start Friday’s game the same way it began each of its playoff contests: by chanting the team mantra – “We believe” – in a circle before taking the field.

The slogan began as a text message to Dorwart from a mother of one of his players before Coquitlam’s run to the championship. And it grew from there.

“Our parents come out with these signs every game, they say ‘we believe’, and all the kids have signed them,” Dorwart said. “It’s really taken on a life of its own and it’s really cool.

“We’re the team that no one thought would be here, so ‘we believe’ is just so appropriate for us.”

Dorwart, whose son Brady plays second base and bats lead off for the Coquitlam team, has been coaching little league for about eight years.

Born and raised in the Southern B.C. city, Dorwart played on its little-league team as a 12-year-old in 1983. He just missed out on a trip to Williamsport himself the next year, when Coquitlam last represented Canada at the Little League World Series.

“So many of the kids on that 1984 team I know very well and for me it feels like it’s come full circle,” Dorwart said. “To be honest, I still have moments where I think it’s not real. ... I’ve played baseball all my life, I’ve coached for a long time and now I [get to] experience this with my son.

“My dad coached me for many years and now that I’m coaching my son, it’s [fulfilling] a lifelong dream by being here.” 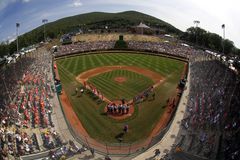 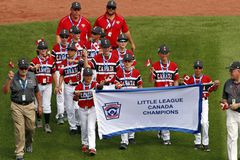 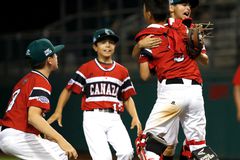