Sandy Koufax did a lot of amazing things for the Los Angeles Dodgers, but a lot of his legend rests on the 1963 World Series.

In the final, he pitched two games of a four-game sweep of the New York Yankees. He struck out 15 hitters in the first of them. He allowed only one run in the second. Both were complete games.

Referencing Koufax’s record that season, Yankee Yogi Berra said, “I can see how he won 25 games. What I don’t understand is how he lost five.”

“He didn’t,” Dodger Maury Wills replied. “We lost them for him.”

In an alternate universe, Clayton Kershaw is Sandy Koufax. He’s a generational talent who can beat you every which way. He’s bigger than Koufax, throws harder and has better stats.

But after this postseason, Kershaw is permanently labelled as a guy who was great when it didn’t matter. He may be the most accomplished cautionary tale in baseball history.

Based more on reputation than utility, Kershaw was the first man out of the bullpen in Wednesday’s deciding game of the National League Divisional Series. This series was supposed to be a walkover. It hadn’t turned out that way.

Kershaw had a two-run lead to start the eighth inning. His second pitch ended up over the wall in left. Kershaw whipped around on the mound and watched it all the way to its end.

His third pitch ended up over the wall in right. As that one came off the bat, Kershaw bent over at the waist as if he were about to be sick.

During the entirety of his major-league career, nearly 35,000 balls thrown, Kershaw had never given up home runs on consecutive pitches. There was so much irony in this outing, you could start a foundry.

With the game now tied, Kershaw was forced to watch what he had wrought from the dugout. His expression reminded you of some martyred saint in a Renaissance painting, just after the arrows have landed. The Dodgers lost it on a 10th-inning grand slam.

“Everything people say is true right now, about the postseason,” Kershaw said afterward. “I understand that.”

Asked if Kershaw deserved to be blamed for the loss, veteran teammate Rich Hill got so emotional he could not speak.

“It’s tough when people say it’s just a game,” Hill finally came up with, doing that jerking head nod men do when they are trying not to cry. “It’s a lot more than that.”

Which is not exactly Hill saying that Kershaw deserves the blame. Because he knows he does.

When you are 31 years old and paid US$31-million, there is an expectation that you will show up when it counts. And Kershaw has rarely shown up under those circumstances.

All that work, all that talent and all that money, and Kershaw is never going to be one of the great ones. Even if he does eventually win one, Kershaw won’t be the No. 1 guy when he does it. Based on evidence, he is a No. 2 guy in his soul.

Only in sports is that a tragedy.

Most of us will never be great at anything. Best case, we might be greater at something than everyone we know. But we’ll never be great great. You might make a nuanced bisque, but no one’s going to ask you to do it at Arpège.

This is why sports maintain their hold on our imagination.

Beyond the caveman neural connection between hunting and chasing a ball around, it’s the idea that these people are the very greatest at something. It’s measurable and indisputable. There is no better hockey player than Connor McDavid tooling around on a frozen pond in Kazakhstan. Because if there were, he would have been found.

But at the highest level, the greatness that certain athletes have isn’t physical. It isn’t statistical. It is ineffable. At its absolute peak, it is immeasurable.

“Win” has become a dirty word in sports – as in, a coach saying of someone, “He just knows how to win.”

Some of them still say it, but apologetically. Teams in every sport are now dying to tell you about all the wonks they have stuffed into a backroom and how many of them worked at NASA. Which is all fine.

But if these people could actually do what they are meant to – reduce sports to a series of binary right/wrong decisions – no one would watch sports any more. It’s a bit like the Arthur C. Clarke story – once a supercomputer has read out all nine billion names of God, the stars start to go out.

There are dozens of Kershaws in sport – guys whose numbers are outstanding; who pass the eye test; who have been consistently great; and who cannot replicate that baseline of greatness once everybody’s watching. They aren’t winners.

Which is not to say they’re no good. There’s room in every walk of life for someone who tries hard and is good enough, including pro baseball.

What Kershaw has done is prove that talent isn’t enough – which we already knew – but neither is resilience. That word is thrown around so much now it’s lost all meaning. We now say it in the same way we might say “musical” – something that can be drilled into you by repetition.

But Kershaw had his chances, took his licks, came back for more and still couldn’t get it done.

We want to believe very badly that everyone is perfectible, especially the best of us. But most of us are born the way we are. Even the all-star pitchers. Some of us can and some of us can’t. Sports is the one of the only places where you can figure out who’s who.

Some day soon, Kershaw will be inducted into baseball’s Hall of Fame. His plaque will be just as big as Sandy Koufax’s. But everyone who goes there, including Kershaw, will know the truth. 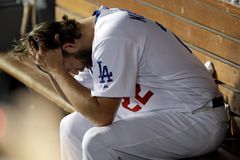 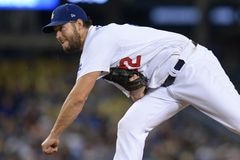