Carlos Correa hit a two-out, tiebreaking home run in the seventh inning for the Houston Astros, who produced another stifling pitching performance and swept Minnesota with a 3-1 victory Wednesday that sent the Twins to a record 18th straight postseason loss.

Nine months after Houston’s rules-breaking, sign-stealing system was revealed, the Astros advanced to the Division Series in Los Angeles. As the sixth seed, they’ll face the Oakland Athletics or Chicago White Sox in a best-of-five matchup starting Monday at Dodger Stadium.

The Twins are 0-18 in the playoffs since winning Game 1 of their Division Series at the New York Yankees on Oct. 5, 2004, a total of seven rounds lost. Since that date, the Astros are 43-35 in postseason play, winning 10 of 15 rounds with three trips to the World Series.

Kyle Tucker hit two run-scoring singles for the Astros and made a key throw from left field for the inning-ending out in the fifth.

Rookie Cristian Javier worked three hitless innings in relief for the victory in his postseason debut and Ryan Pressly pitched a perfect ninth against his former team, giving the Houston bullpen a total of 9 2/3 scoreless innings in this wild card series with three hits allowed.

Nobody on this Twins team has had a hand in more than six of the playoffs losses, but for the second straight year one of baseball’s most potent lineups limped through a brief postseason cameo. In a three-game Division Series sweep by the Yankees last year, the Twins totalled seven runs and 22 hits. Against the Astros, they mustered only two runs and seven hits.

After winning 101, 103 and 107 games in the past three regular seasons, winning the 2017 World Series and losing the championship in seven games to the Washington Nationals last year, the Astros stumbled through the 2020 season at 29-31 under new manager Dusty Baker and general manager James Click with a slew of injuries after the COVID-19 pandemic cut the schedule to 60 games.

They had the third-worst road record in the major leagues, too, but none of that mattered this week against the third-seeded Twins, who were out of sorts in their two biggest games of the year.

OAKLAND Marcus Semien and Khris Davis homered early and the Oakland Athletics held off Jose Abreu and the Chicago White Sox in the late innings for a 5-3 win Wednesday that sent their AL playoff series to a deciding Game 3.

A’s reliever Jake Diekman walked home a run in the ninth, then retired the big-hitting Abreu on a sharp grounder to end it and even the best-of-three wild-card matchup at 1-all.

Game 3 is Thursday at the Coliseum.

The White Sox went 14-0 in the regular season against left-handed starters during the regular season and beat southpaw Jesus Luzardo in the opener. A’s manager Bob Melvin acknowledged it might make him reconsider who to start with the season on the line – perhaps righty Mike Fiers over lefty Sean Manaea.

Chris Bassitt allowed one run on six hits in seven-plus innings during an impressive post-season debut as the AL West champion A’s snapped a six-game postseason losing streak dating to 2013.

CLEVELAND — DJ LeMahieu’s tiebreaking single in the ninth inning off Cleveland closer Brad Hand sent the New York Yankees into the AL Division Series with a wild 10-9 win over the Indians early Thursday in a rain-delayed Game 2 that started in September and ended in October.

At 4 hours, 50 minutes – even without the delays – it was the longest nine-inning game (regular season or post-season) in major league history.

LeMahieu, the AL batting champion during the shortened, 60-game regular season, grounded his hit into centre field to score Gio Urshela, who hit a go-ahead grand slam earlier. Down 9-8, the Yankees tied it in the ninth on Gary Sanchez’s sacrifice fly off Hand, who went 16 of 16 on save tries during the season.

The Yankees stumbled into the post-season. But their heavy-hitting lineup came alive over two nights in chilly, empty Progressive Field. New York pounded Cleveland ace Shane Bieber in the opener and now the Yankees, who hit seven homers in the two games, have found their swing as the calendar flips to the month that defines them. 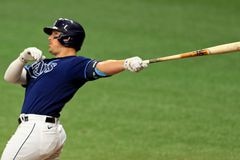 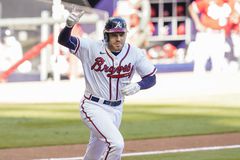 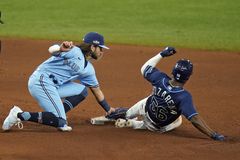