While the city was generally going bonkers with the excitement of the celebration parade of the newly minted NBA champion Toronto Raptors, their baseball-playing brethren at Rogers Centre seemed only casually interested by the daylong kerfuffle unfolding just outside their door.

At least a couple of the flat-screen TVs that populate the expansive Toronto Blue Jays clubhouse were tuned into channels carrying live coverage as the event wound its way through the city’s downtown core at an excruciatingly slow pace on Monday.

The sound was turned up but not many of the players were paying attention as they otherwise prepared themselves for the start of their series Monday night against the visiting Los Angeles Angels.

Catcher Danny Jansen seemed the most invested, watching intently from the back of the room while luxuriating in a cushy black chair. Jansen wasn’t in the starting lineup that night, which might explain his laid-back nature.

Relief pitcher Tim Mayza was also taking in the parade, looking on from a stool in front of his locker stall. And that was about it.

At first glance, rookie star Vladimir Guerrero Jr. seemed drawn to the coverage, relaxing in a chair in front of another TV with his feet casually propped up on a table.

Only upon closer inspection do you realize that the third baseman is not paying any attention at all, his focus on the smartphone he is clutching in his lap and pecking away at.

As the rebuilding Blue Jays churn toward what appears to be the inevitability of a 100-loss season, perhaps openly witnessing the unabashed joy of a fellow sports organization is too much to bear for a team so far removed from that plateau.

Almost on cue, the Blue Jays (26-46) went out and laid another big egg – with pitcher Edwin Jackson getting torched for three home runs in the second inning that helped stoke L.A. (36-37) to a 10-5 victory in the first of a four-game set.

Afterward, Jackson – whose earned-run-average is now up to 12.43 in his seven outings with Toronto this season – was brutally honest in assessing his mound troubles.

“It’s just point blank. Execution’s been terrible,” said the 17-year Major League Baseball veteran. “I know I’m better than that. That’s not who I am but that’s what I’ve shown so far since I’ve been here.”

Mike Trout had himself a bit of a game, homering and doubling during a tidy 4-for-5 night, accounting for three of the Angels’ runs, who crunched four home runs in total off Toronto pitching. Rookie Cavan Biggio swatted two homers in Toronto’s losing effort while Randal Grichuk added another.

The Blue Jays had reached out to the Raptors in an attempt to have one or two of their basketball players attend the game Monday night, which would have been a nice promotional gesture.

But negotiations broke down, probably a good thing considering all the Champagne that was being inhaled by the Raptors along the parade route.

Instead, the Blue Jays had to make do with a congratulatory video montage of the Raptors during their spirited playoff run that was shown on the video scoreboard just before the start of the second inning.

For the third time this season, Toronto manager Charlie Montoyo resorted to having a so-called “opener” start the game on the mound for Toronto on Monday night.

The opener, in this case reliever Derek Law, worked the first inning and was supposed to act as sort of a life preserver for Jackson, the scheduled starter who took over in the second inning.

Jackson has been getting scorched in his starting roles for the Blue Jays this season. The game plan for utilizing an opener was to save Jackson having to face the meat of the Angels order in the top of the first inning – Tommy La Stella, Trout and Shohei Ohtani – and hopefully prolong his outing.

“It helps Jackson, just going twice through their lineup instead of three times,” Montoyo reasoned heading into the game. “That’s the whole idea of it.”

Law did his part, pitching a hitless opening frame with two strikeouts before handing the ball off to Jackson, who treated it as if it were a hand grenade.

After being staked to a 1-0 lead on a home run by Biggio in the bottom of the first, the veteran righty was torched for seven runs off six hits, including three home runs.

The first was off the bat of Justin Upton, playing in his first game of the year after returning from a toe injury, launching the first pitch he saw from Jackson leading off the inning.

Kole Calhoun followed Upton to the plate and he also homered to put the Angels ahead 2-1.

Later, with the bases loaded, Trout doubled to left to card two more runs before Ohtani concluded Jackson’s misery with a three-run homer to left.

Jackson only lasted two-thirds of an inning, the fourth time in seven outings this season he has allowed five or more earned runs in an outing, with his earned-run average now back up to 12.43.

Jackson has now surrendered 12 home runs over 25.1 innings-pitched for Toronto this season. 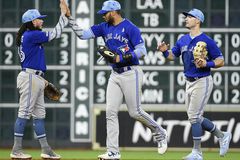 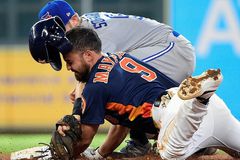 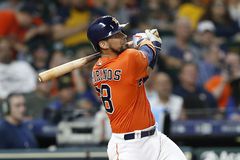