Most MLB players are beginning their summer training camps Friday in preparation for the abbreviated season, but the Blue Jays will be slightly delayed.

Toronto’s location north of the currently closed Canada-U.S. border made things more difficult for the team, which needed permission from the Canadian government to hold camp here.

The Blue Jays got the OK Thursday night – so far for training only. A decision is still to be made on whether the team can host regular-season games at Rogers Centre when they begin later this month.

Here are five things to watch from Blue Jays camp over the next couple weeks:

Professional athletes have been testing positive for the novel coronavirus at an alarming rate over the last few weeks, including several Blue Jays players and staff.

The Blue Jays have been undergoing intake and screening procedures at their Dunedin facility this week in preparation to head north. Team president and CEO Mark Shapiro said players will need two negative COVID-19 tests before they can leave for Toronto.

MLB says players will be tested every other day for COVID both in camp and throughout the regular season. Daily temperature and symptom checks and a monthly blood-drawn antibody test will also be the norm.

MLB’s plan to travel between cities during the regular season and playoffs means there’s a greater chance of spreading COVID-19 from one area to another. And if the Blue Jays are cleared to host games in Toronto there could be backlash from that.

Ontario, which has been reopening in phases throughout the province, has been averaging well under 200 new daily cases over the last week.

Regions the Blue Jays will be travelling to vary in terms of their COVID prevalence.

They will play 60 regular-season games (including 30 on the road) in 66 days.

Players are being asked to self-isolate in a hotel when not at the field, but separating them entirely from other members of society – including hotel staff and security guards at the stadium, for example – could prove difficult. Regular testing should help isolate positive cases quickly, however.

There will be no high-fiving or spitting on the field this summer and no showers after games, part of MLB’s new rules aimed to help mitigate a COVID-19 outbreak.

The league sent a 101-page health protocol document to teams last week that players are expected to abide by, but some of the new regulations may take more getting used to than others.

Clubhouses are also getting a makeover as lockers move the appropriate two metres apart, and kitchens can no longer operate buffet style. Players are expected to keep distance during training drills on the field and safe protocols are to be in place for boarding team buses.

There are also some new rules for play itself, including the use of a designated hitter in both leagues. Extra innings will begin with a runner on second base in an effort to speed things up.

The Blue Jays’ unveiled a prospect-loaded player pool last week, naming the players (teams can have up to 60) that will train with the team at camp.

Among the list is Toronto’s top prospect, right-handed pitcher Nate Pearson, who was expected to begin the season in triple-A. But with the COVID-19 pandemic cancelling minor-league baseball, there’s nowhere for him to play but in the big leagues.

The same goes for players like right-handers Alek Manoah and Simeon Woods Richardson, the prospects returned to Toronto in the Marcus Stroman trade last season. Shortstop Jordan Groshans, the Blue Jays’ first-round pick in 2018, and catching prospect Alejandro Kirk also made the list.

Sunday was the deadline for teams to submit player pools, but additions can be made later. This gives the Blue Jays flexibility to add more players, including their first-round draft pick this year, 21-year-old infielder Austin Martin of Vanderbilt who is still unsigned.

Active rosters will allow up to 30 players to start the season, then reduce to 28 after two weeks. A 26-man active roster will come into play two weeks after that.

SHAKING OFF THE RUST

Players will have been out of action for 16 weeks when camps officially begin Friday – roughly three weeks less than a regular off-season from October to February.

And this hasn’t been a regular three-and-a-half months off.

Players who chose not to stay near their respective teams’ spring training facilities when the pre-season was cancelled in March have likely had limited access to gyms and training centres.

MLB teams have worked on revised fitness plans for their players throughout the layoff, but pitchers who’ve been unable to throw to live hitters, and hitters unable to face live pitching will likely be rusty.

Players will have three weeks to get up to game speed before the regular season is scheduled to begin – that’s about half the time they usually get with spring training. 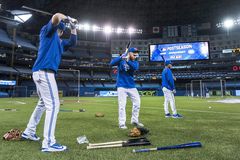 Travel between Canada, U.S. complicating approval for MLB to play in Toronto
June 30, 2020 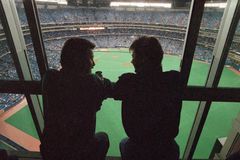