Charles Odum
ATLANTA
The Associated Press
Published May 11, 2021 Updated May 12, 2021
For Subscribers
Comments
Text Size
Please log in to listen to this story. Also available in French and Mandarin. Log In Create Free Account

Vladimir Guerrero Jr. homered and drove in three runs and the Toronto Blue Jays took advantage of Atlanta’s indecisive fielding in the eighth inning, rallying past the Braves 5-3 Tuesday night.

Guerrero had three hits, including a tying single in a three-run eighth.

“I always stay focused, just try to keep swinging and get good contact on the ball, and when it happens, it just happens,” Guerrero said through a translator.

Toronto trailed 3-2 when Jonathan Davis led off the eighth with a double. Marcus Semien followed with a weak grounder to reliever A.J. Minter (1-1), who turned, hesitated and then threw too late to try to catch Davis returning to second base. A replay appeal by the Braves confirmed Davis slid back safely.

“I realized he was out too far and I hesitated and double-pumped,” Minter said.

It was a key mistake.

“He had the guy out at second on the comebacker,” said Braves manger Brian Snitker of Minter. “Who knows where the inning goes if he gests that out.”

A single by Bo Bichette loaded the bases before Guerrero’s single made it 3-all.

With the bases still loaded, Teoscar Hernandez hit a grounder to first baseman Freddie Freeman, who was off the bag. Freeman looked to the plate, paused and then had no play with no fielder covering first. The play was ruled a run-scoring infield single for Hernandez for a 4-3 lead. Jacob Webb’s walk to Cavan Biggio forced in another run.

Snitker said Freeman couldn’t immediately throw to the plate because he briefly bobbled the ball.

“Freddie just didn’t come up with the ball,” Snitker said. “He couldn’t find a handle for a little bit.”

Jordan Romano survived a stressful ninth to earn his first save. Romano gave up a single to Austin Riley with one out before walking pinch-hitter Pablo Sandoval with two outs. Ehire Adrianza’s fly ball to left field ended the game.

Guerrero’s two-run homer off Bryse Wilson tied it at 2 in the sixth. Guerrero put his forefinger to his lips as he jogged around the bases, encouraging silence from the crowd of 21,688.

Ray set a season high with 10 strikeouts while giving up three runs on five hits, including two homers, in six innings.

Blue Jays: OF George Springer (right quad strain) could begin running on Thursday. He has been taking batting practice. ... RHP Anthony Castro (right forearm strain) is eligible to come off the 10-day IL but probably won’t during the Atlanta series, according to manager Charlie Montoyo. ... The team is awaiting MRI results given RHP David Phelps (right lat strain). ... RHP Nate Pearson was optioned to Triple-A Buffalo and RHP Jeremy Beasley was recalled and active for the game.

Braves: RHP Chris Martin (right shoulder inflammation) was to be evaluated after making his third rehab appearance for Triple-A Gwinnett on Tuesday night. ... RHP Tanner Roark, 34, signed a minor-league contract. Roark was designated for assignment by the Blue Jays on April 30 with a 6.43 ERA in one start and two relief appearances. Roark is 76-68 with a 3.85 ERA in nine seasons, including six with Washington. ... RHP Jay Flaa was claimed on waivers from the Baltimore Orioles and optioned to Gwinnett.

The series is special for Blue Jays LHP Travis Bergen, a native of McDonough, Georgia, an Atlanta suburb. Bergen grew up about 30 minutes from the Braves’ former home, Turner Field.

“It’s going to be my first time playing in Atlanta, so it’s going to be special,” Bergen said Tuesday. “I’ve had this trip circled on the calendar for quite a while.”

Bergen cheered for the Braves as a boy. He said his favourite players were Chipper Jones, Andruw Jones and Rafael Furcal.

Bergen, 27, has not allowed a run in 6 2/3 innings through five games, including one start, this season.

Wilson was recalled from Gwinnett for the start as Snitker created extra rest for his normal five starters. The right-hander allowed two runs in six innings. Snitker promised he’ll make more moves to create extra rest for his starters this season.

The Blue Jays are 4-0 against the Braves this season. The teams opened the three-game interleague series less than two weeks after the Blue Jays swept three games from the Braves at Toronto’s temporary home in Dunedin, Florida. 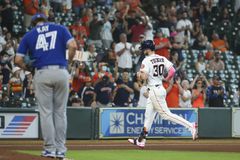 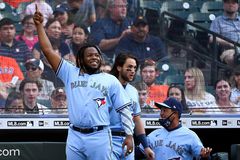