Charlie Montoyo called it “one of my best days in baseball”

“And I’ve been around for a long time,” said the 55-year-old Blue Jays manager. “I was so happy to be here. I was actually nervous before this game because I wanted us to win so bad, for the fans back in Toronto What a day. I’m never going to forget this day.”

It was the day when baseball came home, at least north of the border.

Teoscar Hernandez and Bo Bichette homered to help the Blue Jays celebrate their first game in Toronto in 670 days with a 6-4 victory over the Kansas City Royals on Friday.

The Jays’ last game at Rogers Centre was Sept. 29, 2019, when they finished out their season with an 8-3 win over the Tampa Bay Rays. Toronto went 83-76 on the road since then, forced south of the border due to pandemic-related travel restrictions.

The Jays played in Buffalo, their minor-league affiliate, and Dunedin, their spring training base in Florida.

“It’s hard to explain the feeling,” said Bichette. “We’ve just kind of been trying to pretend like we had a home. And t’s difficult to do for two years. So when we finally get back here, it feel like definitely a big weight off our shoulders.”

Leading 3-2, the Jays (52-48) loaded the bases with no outs in the seventh against hard-throwing Domingo Tapia, scoring one when Marcus Semien hit into a double play. Bichette then hit his 19th homer of the season to right-centre field to add two more runs.

The Royals (45-57) added an unearned run in the eighth, taking advantage of a Bichette throwing error, and another run in the ninth.

The game ended in style and with some local flavour.

Jordan Romano, born in Markham, Ont. pitched the ninth for his ninth save of the season. He joins Paul Quantrill as the only Canadians to record a save at Rogers Centre.

And Toronto third baseman Santiago Espinal got the final out with a dazzling bare-handed catch over his shoulder as he tracked down a pop-up.

Hernandez gave the Rogers Centre crowd of 13,446 – considered a sellout under current COVID-19 restrictions – something to celebrate early, crushing a solo home run 441 feet to left field to open the second inning. His 16th homer of the season was clocked at 112 m.p.h.

The crowd was loud, much to the Jays’ delight.

“The energy, you could feel it from the second I walked out It reminds you why you play the game,” said Stripling, who also got to see the home team facilities at Rogers Centre for the first time.

George Springer doubled home another run in the inning for a 2-0 Jays lead. A Bichette single, stolen base and Lourdes Gurriel Jr., single made it 3-0 in the third.

Stripling (4-6) gave up just a double and a walk in his first four innings. But the Royals cut the lead to 3-1 in the fifth on Nicky Lopez’s RBI triple. Kansas City catcher Salvador Perez hit a solo homer with one out in the sixth, ending Stripling’s night after 76 pitches (47 strikes). He gave up four hits and two walks, striking out one.

It was the 26th homer of the season for Perez, who has homered in each of the last three games.

Rookie left-hander Daniel Lynch (1-3) went six innings for the Royals, giving up three runs on seven hits. Brad Hand came on in the eighth for his Blue Jays debut.

“I’ve felt an incredible amount of energy from it, from just coming here,” GM Ross Atkins said before the game when asked about the homecoming. “Really the biggest things is how excited I am for our young players to feel things I’ve experienced here in this stadium, in this city, in this country. And what that means for our future.”

“I don’t know the right words to express (it) but it’s an incredibly gratifying feeling to be here today,” he added.

The return home came in game No. 100 of the season for the Jays.

It marked the longest away run in Major League Baseball history. The Marlins went 327 days between the end of 2019 and their delayed 2020 home opener.

The Jays came into the game having won two of their last three after losing five of the previous six. The Royals, who lost 11 in a row in May, had won eight of their last nine, including the last two.

The enthusiastic crowd made its presence felt, despite the limit on attendance.

The Toronto players emerged before the game from an opening in centre field to a thunderous standing ovation, running through a flag-bearing honour guard with the Rogers Centre roof open. A loud chant of “Let’s Go Blue Jays” followed as the players lined the infield which was adorned with huge letters spelling out the word Home.

Montoyo said he looked down to hide tears as fans were shown on the video screen talking about how much they had missed the team. Bichette said he and many of his teammates had chills.

The crowd roared when Stripling fired a 90 m.p.h fastball for a strike to open proceedings. And it sounded like a jet engine in welcoming Vladimir Guerrero Jr. to the plate, building to an MVP chant.

Still the fans showed some rust, needing several attempts to get the wave going.

Toronto strengthened its starting rotation Friday by acquiring right-hander Jose Berrios from the Minnesota Twins in exchange for two top prospects: infielder Austin Martin and right-hander Simeon Woods Richardson. Berrios, a two-time all-star, is 7-5 with an earned-run-average of 3.48 in 20 starts this season.

Later in the day, the Jays acquired veteran reliever Joakim Soria from the Arizona Diamondbacks in exchange for two players to be named later.

The Jays are the first team to play home games in three different cities in the same season (Dunedin, Buffalo, Toronto) since 1903, when both the Cleveland Naps and the Detroit Tigers did it.

Eight players on the Jays active roster had never played at Rogers Centre. Another six were set to make their debut here as a Blue Jay.

The 11-game homestand, which also includes series against Cleveland and Boston, was made possible by the granting of a National Interest Exemption that allows players and staff who aren’t fully vaccinated to cross the border with a modified quarantine.

Major League Soccer and its three Canadian teams have been granted the same exemption.

The Jays arrived home on a winning note, having battered Boston 13-1 Thursday. Guerrero led the way with his 33rd homer of the season, a blast that cleared the Green Monster and exited the ballpark. Jays ace Hyun Jin Ryu held Boston to two hits over six innings.

The players got back in the wee hours of the morning with Stripling saying some players checking out the Rogers Centre field at 4 a.m.

In their long-awaited home debut, the Jays hosted staff from Toronto General Hospital’s intensive care unit. The club will host “Frontline Champions” and guests in a dedicated section for each game of the first homestand.

The club also honoured a COVID-19 survivor and a Toronto Transit employee representing " the thousands of Canadian workers that bravely showed up to their jobs to help our community so that others could stay home.” 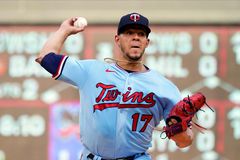