Teoscar Hernandez hit a three-run homer after missing three weeks following a positive test for the coronavirus, Robbie Ray took a one-hitter into the seventh inning and the Toronto Blue Jays beat the Atlanta Braves 13-5 on Friday night.

Hernandez went 2 for 5, including a sixth-inning shot to centre off Jacob Webb that put Toronto ahead 10-0.

“I’m glad I’m back, and happy to be with my teammates and my team,” Hernandez said before the game.

Hernandez felt bad for four to five days and had symptoms that included an aching body, headaches and fever.

“It wasn’t a happy moment,” Hernandez said. “It wasn’t happy days. I got through it and I’m here now.”

Both Hernandez’s wife and son also tested positive but have recovered.

Ray (1-1) allowed two runs, five hits and struck out five over 6 2/3 innings. The left-hander allowed just one runner through six innings, on Travis d’Arnaud’s double with one out in the second, then gave up Ozzie Albies’ two-run homer in the seventh.

Alejandro Kirk had his first multihomer game for the Blue Jays.

“After the first inning, looked like he was going to get it going,” Atlanta manager Brian Snitker said of Smyly. “Just too any balls in the middle of the plate. Couldn’t locate his fastball.”

Bichette hit a two-run homer in the third. Kirk had a fourth-inning two-run drive on a 3-0 pitch and Grichuk’s solo shot in the fifth made it 5-0.

Kirk drove in two on his second home run in the fifth.

Atlanta’s Marcell Ozuna had been 0 for 20 against lefties this season before doubling off Ray in the seventh. He had a two-run single during a three-run eighth.

George Springer, who signed a team-record $150 million, six-year deal this off-season, singled in the first for his first Blue Jays hit and went 1 for 3, walked twice and stole a base. After missing time because of oblique and right quadriceps strains, he was hitless in four at-bats during his first game Wednesday against Washington.

Kirk said through a translator that having both Hernandez and Springer in the lineup feels incredible.

“Both are great, great hitters,” Kirk said. “The lineup from top to bottom, it looks good, it felt good and we showed it tonight.”

The Blue Jays moved back the starting time of night games at TD Ballpark a half-hour to 7:37 EDT due in part to the sun, which was located just above first-base side roof at the single-deck stadium early on in recent games. Blue Jays 3B Joe Panik lost a high-hop single by Washington’s Ryan Zimmerman in the first inning Wednesday night in the sun.

Braves: Ronald Acuna Jr. was in centre so Guillermo Heredia, who started the previous 11 games, could be rested. Snitker said Acuna could get limited time at the position.

Blue Jays: Springer was the DH for the second straight game but might get a start in centre soon.

Braves: Snitker said LHP Max Fried (right hamstring) was feeling great one day after throwing to hitters. Fried could rejoin the rotation next week. LHP Sean Newcomb (undisclosed) returned from the 10-day IL and gave up two runs, two hits and two walks in two-thirds on an inning.

Roberto Alomar is expunged from baseball’s present, but will always be part of the Blue Jays’ history
April 30, 2021 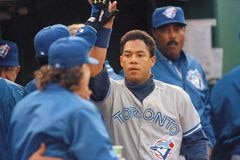 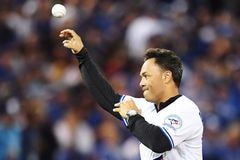 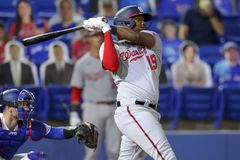