Justin Smoak left the field to a standing ovation on Sunday but didn’t return for the customary curtain call that’s become expected of a player who’s likely played his final game in a team’s uniform.

The pending free agent wasn’t aware that’s what the fans were asking for.

“Were they giving me an ovation?” Smoak asked with a laugh after hitting two doubles and driving in three runs in the Blue Jays’ 8-3 win over the Tampa Bay Rays.

“I knew they were giving me an ovation when I was leaving the field, but … coming back I didn’t know they were doing it like that. I think it’s more respect to the guy pitching and the guy trying to hit.

Smoak, who’s spent the past five seasons in Toronto, doubled in Rowdy Tellez in the seventh inning for a 7-1 lead before being replaced by pinch-runner Billy McKinney.

He was greeted with hugs from teammates – led by rookie Vladimir Guerrero Jr. – at the dugout steps.

“I said, ‘Man, I couldn’t write that moment any better,'" Montoyo said. “Two big doubles in the game. … For Smoaky to do that, it was awesome. You could see how the players came out [to greet him at the dugout steps] because they have so much respect for that guy.

“He’s such a team guy and such a professional and it was a great moment. It was great to see.”

“I kinda wish I had given Vladdy my helmet so he could maybe pinch run for me there,” he said. “But, yeah, it’s great. We’ve got a bunch of young guys who are trying to find their way and we have some young guys here who are really, really good players.

“So it’s something to be excited about.”

The 32-year-old was one of few veteran voices in a young Toronto clubhouse this season. The addition of so many new players meant reduced playing time for Smoak, especially over the final month of the season, as the team tested out future options at first base and DH.

His transition to a leader in the clubhouse happened quickly, he said.

“I was one of the guys and then the next thing you know I’m the old guy. So it was different, but I felt like as the season progressed I got better at being that guy for them when they needed me,” Smoak said. “And I felt like it wasn’t all about me at that point, it was more what can I do to help and that’s what I tried to do.”

Smoak also dealt with a nagging quad injury for much of the season, but said that wasn’t an excuse for a sub-optimal offensive performance. He finished the year batting .208 with 22 homers, 16 doubles and 61 runs batted in.

Smoak received loud cheers from the crowd of 25,738 before each of his at-bats on Sunday and a thunderous standing ovation in his final plate appearance in the seventh.

His first double of the game plated a pair in the first inning to give the Blue Jays a quick 2-0 lead.

Ji-Man Choi homered for the Rays (96-66) and Jesus Aguilar and Guillermo Heredia drove in a run apiece.

Clay Buchholz (2-5) pitched five solid innings, also likely in his final game in a Toronto uniform. The pending free-agent veteran allowed one run and four hits with a walk and six strikeouts.

Blake Snell (6-8) allowed three hits and two runs with two walks and four strikeouts in 2⅓ innings for Tampa. Snell was on a limited pitch count for the playoff-bound Rays, who will play Oakland in the AL wild-card game next week.

Toronto, meanwhile, ended the season nowhere near a postseason berth.

But Montoyo felt his team improved over the past few months, calling the second half of the season the highlight of his first year as a manager.

“We improved and we’re playing really well. There’s momentum heading into next year.”

“I definitely see it in the near future,” Buchholz said. “Given being healthy and everything, the team’s going to click and it’s going to be a fun ballclub to be a part of.” 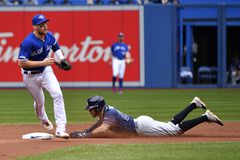 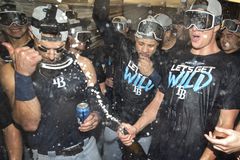 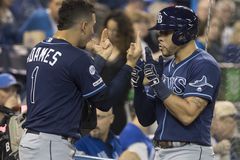