George Springer shook his head at the mere mention of Houston Astros teammate Justin Verlander’s past October trouble, the only pitcher in baseball history to go 0-5 in the World Series.

“We wouldn’t be here without him,” Springer declared. “I don’t care what individual stats say.”

Then, as if to emphasize the point, the Astros outfielder repeated himself: “We wouldn’t be here without him. So I’m glad that we’re handing the ball to him. We’ll see what happens.”

Verlander will get a chance to make people forget his postseason struggles, including losses in win-and-advance games in this year’s AL Division Series and Championship Series, if he can help Houston clinch a second championship in three years. The 36-year-old right-hander will start Game 6 at home against Stephen Strasburg and the Washington Nationals on Tuesday night.

“He’s prepared. He’s ready for this moment. We’ve been communicating back and forth throughout the whole series on how we were going to make an adjustment to what we were seeing and how we were going to attack,” said Gerrit Cole, Verlander’s rotation-mate and chief AL Cy Young Award competition this season.

“It’s going to be business as usual for him. He’s going to set the tone for us,” Cole said. “Hopefully we can back him up with some runs, and play some great D.“

Cole gave up just one run in seven innings and struck out nine as the Astros grabbed a 3-2 series lead Sunday night by beating the NL wild-card Nationals 7-1.

Springer, Carlos Correa and rookie Yordan Alvarez all delivered two-run homers – celebrated with elaborate handshakes and hearty hugs – for the team that led the majors with 107 wins in the regular season.

The hootin’ and hollerin’ carried on in the mini-cafeteria in the visiting clubhouse at Nationals Park.

It’s really been rousing to be on the road so far: Only two other times in baseball history did the home team fail to win any of the first five games of a World Series.

The Nationals won the first two games in Houston by a combined score of 17-7, before the Astros switched everything around and took all three games in Washington by a total tally of 19-3.

The Nationals entered the weekend having won 18 of 20 games, which was the best streak the team had posted since moving from Montreal to Washington in 2005. Then they went 0-3 at home.

“We’re just going back there,” Nationals outfielder Juan Soto said, “trying to do the same thing we did before.”

Now comes Monday’s break in the best-of-seven series, before Houston asks Verlander to try to end the World Series.

If he can’t, and there is a Game 7 on Wednesday, the Nationals will hope they can send out three-time Cy Young Award winner Max Scherzer, who was scratched just hours before Game 5 because of a neck problem that left him unable to lift his throwing arm.

Scherzer said he was given a cortisone shot and needed his wife’s help just to get dressed.

There was no definite word for early Monday afternoon.

“Hopefully he’s a little bit better,” manager Dave Martinez said before the team travelled to Texas. “My understanding is it takes about 24 hours for this injection to really work.”

On the other hand, Verlander has not been pitching up to the high standards he established while winning 225 games, collecting 2011 AL Cy Young and MVP honours and earning eight All-Star selections.

That includes a 12-3 loss in Game 2, also while facing Strasburg.

Five days later, Verlander gets another shot at the Nationals.

“We’ve got J.V. on the mound. A J.V. day is fun. I’ve been watching that guy pitch for a lot of years,” Astros reliever Joe Smith said. “He ain’t slowing down.”

Still, it’s important to recall that two years ago, in another Game 6, Verlander could have sealed the Fall Classic against the Los Angeles Dodgers – and even had a sixth-inning lead, but Houston wound up losing 3-1. At least the Astros came back the next night to win Game 7 – and their first title.

Then, this October, Verlander got the ball on short rest for Game 4 of the ALDS against the Tampa Bay Rays, but again couldn’t get the job done in a close-out game, giving up three runs in the first inning and losing 4-1. Once again, though, Houston won the next game to advance.

And in the ALCS against the New York Yankees, the same scenario played out: Up 3-1 in the series, Verlander got the start in Game 5, but he allowed four runs in the first inning of another 4-1 loss. Yet again, Houston won the next game to bail him out.

Strasburg, meanwhile, truly has been at his best this postseason, frequently relying on his seemingly unhittable changeup or his right-where-he-wants-it curveball as out pitches, rather than the high-90s mph fastball he thrived with in earlier times.

The 31-year-old righty enters Tuesday with a 4-0 record, 1.82 ERA, 40 strikeouts and just two walks in five appearances this month, four as a starter.

“We’ve got Justin Verlander on the mound, and that brings a lot of confidence to our clubhouse,” Astros manager AJ Hinch said. “Their guy’s pretty good, too.” 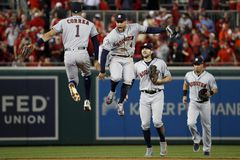 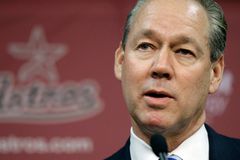 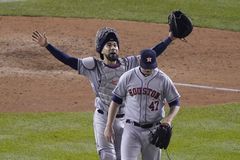