Playing in a city with multiple teams in the midst of playoff or championship runs, the Toronto Blue Jays were hardly top billing Tuesday as they took on the Kansas City Royals at Rogers Centre.

While the Maple Leafs rested following their win Monday over the Boston Bruins in their first-round NHL postseason series, down the street at Air Canada Centre the Raptors were set to face the Washington Wizards in the second game of their NBA playoff matchup.

Over at BMO Field, meanwhile, Toronto FC was playing host to Guadalajara in the first leg of the CONCACAF Champions League final.

That left the Blue Jays to bring up the rear on an unusually busy day on the city sports scene as they held a doubleheader against Kansas City, one day after falling ice from the CN Tower tore through the Rogers Centre roof and forced the postponement of the opener of their three-game series.

The 18,645 fans who turned out for the double bill were treated to a pair of Blue Jays wins, after Toronto knocked around Kansas City 11-3 in the afternoon contest before waging a comeback in the evening game. They took that one 5-4 on the strength of four-run seventh inning and a walk-off from Luke Maile, who belted a bases-loaded single off Royals lefty Brian Flynn in the bottom of the 10th to win the game.

After a shellacking earlier in the day, the Royals came out with a bang in the late match, scoring in the top of the first to get on the board early. Facing Joe Biagini, who was making his first start of the season, the first four Royals hitters reached base on a combination of two singles, a walk and a hit batsman. Biagini limited the damage to one run, but the Royals were back for more in the third.

They extended their lead to 2-0 after Whit Merrifield worked a leadoff walk and then scored on a Mike Moustakas double. Abraham Almonte notched a solo homer in the sixth to give the Royals a three-run lead.

The Jays fought back in the seventh. Royals reliever Justin Grimm issued three straight walks, loading the bases with no out. Back-to-back singles from Maile and the pinch-hitting Devon Travis evened the score, before Steve Pearce put Toronto ahead with a run-scoring single up the middle.

Toronto reliever Ryan Tepera couldn’t hold that lead, surrendering a solo shot to Alcides Escobar to knot the game at 4-4. Closer Roberto Osuna came on in the ninth and despite giving up a leadoff single and throwing a wild pitch to put to go-ahead run in scoring position with no out, he retired three Royals in a row before handing the ball off to Tyler Clippard. Clippard, who earned the win, pitched a scoreless 10th to set up the walk-off.

In the early game, Toronto batters combined for 13 hits. After trailing 3-2 through four frames, the Jays scored nine runs in the fifth and sixth innings to complete the come-from-behind victory.

Randal Grichuk and Yangervis Solarte homered for the Blue Jays, picking up a pair of hits each. It marked Grichuk’s first multihit game of the season. Entering Tuesday, the right fielder, acquired by Toronto in an off-season trade with the St. Louis Cardinals, was hitting only .071 (3-for-42).

Toronto’s Jaime Garcia, the left-hander, pitched five innings and gave up three runs on eight hits with five strikeouts to earn the win.

Garcia, who signed a one-year deal with the Blue Jays in February after pitching for three teams last season, improved to 2-0 in three starts this year despite a shaking outing.

“It wasn’t my best stuff, and I really wasn’t sharp at all,” he said.

Solarte put the Jays on the board in the first inning with his third homer. With a full count, he sent a two-run shot to the second deck over the left-field wall to spot Toronto a 2-0 lead.

The Royals threatened in the top of the second when they loaded the bases with none out. Garcia escaped after conceding only one run to keep Toronto in front, but an inning later, Moustakas evened the game with a solo homer before Lucas Duda launched a torpedo over the right field wall to put the Royals ahead 3-2.

Toronto rallied for three runs in the fifth and jumped back in front by a pair. Then Grichuk tore the game open with a three-run shot in the bottom of the sixth. The Blue Jays cruised the rest of the way. 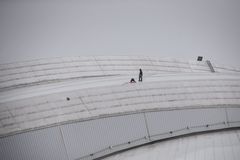 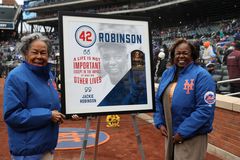 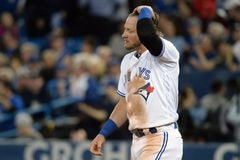