They made clear their intention to get substantially better. They pursued just about every high-end free agent on the market. They flashed a lot of cash around town. When the moment came, and their only rival in the bidding was distracted by scandal, they went over the top rope – financially.

Welcome to the American League East, Messrs. Shapiro & Co. It’s good to finally have you here.

On Tuesday night, the Jays acquired the services of George Springer, late of Houston.

Springer is 31 years old, a three-time all-star, arguably the best leadoff hitter in the game and plays a position the Jays badly need to fill, centre field.

Most important – or least important, depending on how much you like your charts and graphs – Springer is a winner. While most players level off in the postseason, Springer gets better. A lot better. He was the MVP of the 2017 World Series.

These days, all that gets you in some corners is a 21-trash-can-lid salute. But Springer was less tainted by the Astros cheating scandal than the rest of his boldface teammates. At the very least, he showed enough smarts to shut up about it rather than dig the hole deeper.

Last season, when the rest of the Astros drove into a statistical ditch without their little video friend, Springer led the team (which still made the playoffs) in most offensive categories.

Houston is well over the luxury-tax threshold. It is still good, but you can see the cliff’s edge coming up fast. The Astros made it known that Springer no longer fit in their payroll plans.

That left him playing the most unpredictable free-agent market in many years. Things aren’t going economically gangbusters in Major League Baseball right now, and it’s not clear when they will again. The result is tumult. You can’t be sure who’s going to get what, but it stands to reason that it will be less than they expect.

The Jays were in on another top-tier free-agent bat, DJ LeMahieu. They offered him US$78-million over four years. (It’s not clear who leaked this number after the fact, but if it was Toronto, it’s a little like getting on Facebook to tell your friends: “Everybody, some personal news. You know that job I told everyone I really, really wanted? I came second. A very distant second.”)

The Yankees offered LeMahieu a bit more money (US$90-million) over six years. He chose to be paid less in New York. So it’s either the city, the club or the length of term that convinced him. Knowing how things have gone for the Jays, it was all three.

As usual, the Jays had no comment on this. But a narrative was beginning to solidify: if the Jays didn’t get at least one of the two or three premier free agents still available to them, this offseason would be a total disaster.

There was also the small matter of re-signing their president, Mark Shapiro, to a new five-year deal when he had yet to manage much in terms of quality baseball team presidenting. That wasn’t going over so well.

Maybe that’s down to the good backslapping work of the Toronto executive. Or the allure of the outsider. Or maybe the right people just enjoy their nights out on the road in Toronto. Whatever it is, it provides the team with a lot of cover in the cloistered world of baseball.

The Maple Leafs still care – a lot – about what is said and written about them by the local media. But the Jays only really care about what a few people at ESPN and Fox Sports think of them.

Those believers were becoming doubters. That wasn’t a problem. It was an emergency.

Springer was the team’s last, best hope. Reportedly, Toronto had one competitor in the market – the New York Mets.

The Mets were just bought by a hedge-fund guy. I can’t remember his name, and it doesn’t matter because all these sports-team-buying hedge-fund guys are exactly the same. First, they buy a helicopter, then a private island and eventually their own circus.

Buoyed by hope, money and zero regard for a value proposition, the Mets were heavily favoured. Springer is a native of Connecticut, a short helicopter flight from New York’s Citi Field. But negotiations were dragging on because spring training doesn’t start for another few weeks, and it’s a buyer’s market.

This is where it got interesting.

The Mets’ brand-new GM fell backward into a sexual-harassment scandal. Because it takes at least 24 hours for guys in this situation to tie a proper knot in the professional noose, the Jays had a small window to close with Springer.

Most observers thought Springer would get in the neighbourhood of US$125-million over six years. Toronto went up to 150. It’s too much – and it’s about time. It isn’t fair that Toronto is not as attractive to ballplayers simply because the team is in Canada. Nonetheless, it simply is.

So while the Mets were busy proofreading news releases written by their lawyers, Springer was packing for Florida. He’ll do a physical and then, knock wood, he’ll be a Jay.

Soon enough, everyone will have the chance to pat themselves on the back for a job well done. Before that gets annoying, let’s beat them to it.

The Jays and their owner, Rogers Communications, have taken a lot of stick in recent years for their cheapness and lack of ambition. For their cost-cutting, their double-talk and their tendency to answer every straight question with gauzy futurism.

But you gotta give ‘em credit here. They have a team on the edge of something fun. They still need a bunch of things, but a bona fide star who has been there before was absolute top of the list.

I didn’t think they had it in them. I was wrong. 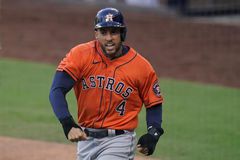 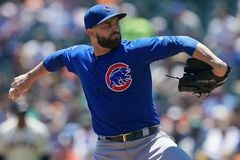 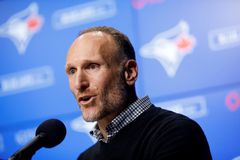