All-Star second baseman Gleyber Torres tumbled so awkwardly , so hard, so suddenly, it prompted an audible gasp from the packed crowd at Yankee Stadium.

Now the AL East champions can only wait for a prognosis as they prepare for the playoffs.

Torres was hurt when his legs buckled while fielding a grounder and made an early exit Friday night as the New York Yankees lost to the Toronto Blue Jays 4-3.

Boone said Torres felt weakness in his lower legs and will be examined by a doctor.

Boone said he pulled Torres as a precaution. Torres leads the team with 38 home runs and is hitting .284 with 90 RBIs.

Torres was not available for comment after the game.

The Yankees have been beset by injuries this year, with several stars banged up heading into their Division Series opener Oct. 4.

“He’s been one of the few guys who’s lasted through everything,” teammate Brett Gardner said. “Hopefully, not too serious.”

Torres was shaken up in the fourth. With Cavan Biggio running from second, Torres skidded to stop Vladimir Guerrero Jr.’s grounder up the middle and sprung to his feet to throw home. But his plant leg gave way, and he went down hard as Biggio scored.

The fall caused the crowd of 45,270 to gasp, and Boone and head athletic trainer Steve Donohue hurried to check on Torres. After a few moments, Torres got up.

Torres initially told Boone was more than scared than anything and said he felt fine to stay in. But after striking out in the sixth, Torres said he felt a little weak.

“Got him out of there,” Boone said.

Aaron Judge and Tyler Wade homered for the Yankees a day after they clinched the division. New York is still competing for the best record in the majors and home-field advantage throughout the post-season — Houston is 101-53, the Yankees are 100-55.

Justin Smoak hit a go-ahead, two-run homer in the seventh to help Toronto match a season high with its fifth straight victory and ensure the Blue Jays will not lose 100 games. He connected off Tommy Kahnle (3-2) as the Yankees’ bullpen wobbled in the late innings for the third time in a week.

“They want to win every day and that’s awesome,” manager Charlie Montoyo said. “Nobody wants to go home, they want to win and winning in this place — because I’ve been here in this division for a long time — it’s tough and to win a nail-biter like that today.”

Jason Adam (2-0) won in relief and Ken Giles closed for his 21st save in 22 chances. Gardner was angered by a strike call on a 3-1 pitch with one out in the ninth, lined out and kept staring at plate umpire Joe West.

Yankees starter J.A. Happ allowed two runs and four hits in 5 1/3 innings, giving up his 34th home run. He worked around an early triple on a flyball misplayed by right fielder Clint Frazier.

The Blue Jays claimed INF Breyvic Valera off waivers from the Yankees. He’ll join his new team Saturday. RHP Ryan Dull, recently claimed from the Yankees, was designated for assignment.

There was a pregame moment of silence for Howard “Hopalong” Cassady, the 1955 Heisman Trophy winner and NFL running back who was a longtime scout, coach and special instructor for the Yankees.

KING FOR A DAY

Yankees pitcher Michael King can only hope there are more days like his first one in the majors. The 24-year-old was stretching out at the team’s complex in Tampa, Florida, at 11 a.m. Thursday when he was told he was being called up to the majors. He quickly packed, caught a flight and made it to Yankee Stadium by 6 p.m.

King didn’t get into the game against the Angels, but gladly participated in the Yankees’ clinching party. “I was on the outskirts, but I took part,” he said.

King was 3-1 at Triple-A this season and was limited by right elbow trouble. He’s healthy now and could be used down the stretch. He warmed up in the eighth Friday night. “That felt great,” he said.

Blue Jays: SS Bo Bichette is likely to miss this weekend series after being hit on the helmet by a pitch Thursday night in Baltimore. The 21-year-old rookie is batting .311 with 11 home runs in 46 games.

“It could be a few days, three days, a week,” Montoyo said.

Yankees: OF Giancarlo Stanton got a day off after playing two days in the field. He’s set to start Saturday. … Slugger Edwin Encarnación (oblique) is expected to play next week, Boone said. Sánchez (groin tightness) is recovering more slow than Encarnación, but Boone is “optimistic he’ll be ready for the post-season.”

Yankees: LHP James Paxton (14-6, 3.88) has won a career-best nine straight starts. He beat Toronto last weekend in his most recent game and pitches this time on six days’ rest. 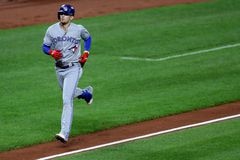 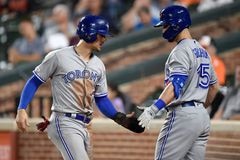 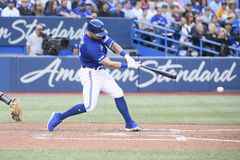