Hayden Bluth is just one of at least 41,313 Washington-area baseball fans who weren’t allowed inside the gates Monday at Nationals Park. But he’s the only one who showed up anyway.

Bluth, a New York Mets fan from the nearby D.C. suburb of Arlington, Va., has been staging a one-man protest outside the ballpark where the world champion Nationals will meet the Toronto Blue Jays again tonight, hoping to settle the score after Monday’s 4-1 loss.

At each of the past four games, Bluth has maintained a torturous, solitary vigil, shouting, “Sell me tickets,” and brandishing the same slogan on a hand-lettered placard. All the while the games take place before the outdoor stadium’s 41,000-plus empty seats, baseball’s intoxicating sound effects – including piped-in crowd noise – audible from the street.

“We’re outside right now and I’m willing to put my mask on,” said Bluth, his face-covering in his pocket, given the dearth of people around and the blistering 35 C heat.

“I’m willing to put my mask on and sit in the second or third level, safely distanced from other fans. There’s no reason why it wouldn’t be just as safe to meet in the ballpark as it would be to be at the restaurant right across the street.”

Last October, Nationals Park was the centre of the major-league universe, with the Nationals captivating a baseball-mad city on their way to a seven-game World Series championship.

Nine months later, with the “World Champions” banner temporarily replaced by a Canadian flag for the duration of Toronto’s four-game stand, foul balls and home-run shots rattled unnervingly around the deserted stands, the neon billboards still shouting, “Let’s Make Some Noise,” with no one around to oblige.

Bluth said he listens to the games on his phone, but the feed is delayed by as much as 30 seconds, which means he often glimpses details of the action on the giant video screen – partially visible from the street – long before he hears the play-by-play through his earbuds.

Others in the United States have been passionate about their country’s famous civil liberties. In April and May, protesters surrounded state legislatures to demand the right to leave their homes, to open their businesses, to go about the traditional business of life, liberty and pursuing happiness.

In June and July, they turned their anger toward the idea that they should be forced to wear masks, egged on by early doubts about their effectiveness and now largely uninterested in the entreaties of public health officials, who insist that a face-covering is the most effective defence against the spread of the novel coronavirus.

Since then, the pandemic has exploded across those parts of the country, where businesses opened early, partiers crowded beaches, and pool patios and people ventured out in public with impunity – Florida in particular. And the U.S. leads the world in total cases of COVID-19 – 4.4 million total cases and 150,000 deaths to date, with officials projecting 200,000 by November.

Bluth is aware of the reality. He just wants to confront it head-on.

“I don’t want to sound callous in any way, but the world is gonna keep spinning and we have to do this safely,” he said, citing the case of Eric Sugarman, the infection-control officer for the NFL’s Minnesota Vikings.

Sugarman confirmed Monday that he and several members of his family have tested positive for COVID-19. NFL commissioner Roger Goodell has since cancelled the league’s entire preseason schedule.

“As I sit here in quarantine, it is clear this virus does not discriminate,” Sugarman said in a statement. “It should continue to be taken seriously. I encourage people to take the necessary precautions and follow guidelines that have been established nationally and locally.”

To Bluth, that’s a clear sign that it’s time to stop hiding from the threat.

“If those who are trying to keep us protected can’t keep themselves protected, it’s just time to admit that the virus is just a virus, and we have to kind of deal with it and live life the best we can,” he said.

“But those of us who are still healthy have to kind of pick up the slack and keep moving on.”

Monday’s Miami Marlins home opener was abruptly cancelled on the weekend, after a number of players tested positive for COVID-19. The New York-Philadelphia game was also called off since the Yankees would have been in the same clubhouse the Marlins used last weekend.

The biggest challenges still lie ahead, Jays manager Charlie Montoyo said – particularly early next month, when the Jays are scheduled to play host to Miami at Sahlen Field. The Jays also have two more series with Tampa Bay next month – one home, one away – and a road series in Miami in early September.

What happened to the Marlins “could happen to any team,” Montoyo said, offering his sympathies and best wishes to Toronto’s Florida rival.

“The moment we left Canada, there was concern – you know, we’ve got to follow the guidelines,” he said. 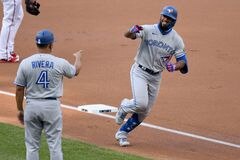 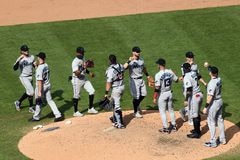 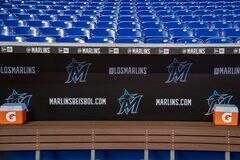