Yairo Muñoz had three hits and the Boston Red Sox salvaged a spit of their doubleheader as the “road” team at Fenway Park with a 3-2 over the Toronto Blue Jays on Friday night to halt a five-game losing streak.

Muñoz went a combined 6 for 7 in the twin bill with a two-run homer, two doubles and three RBIs.

Toronto was the “home” team in the second game, which was the makeup of the Aug. 27 game in Buffalo, New York, that was postponed when the teams didn’t play in protest over the shooting by police of Jacob Blake, a Black man, in Kenosha, Wisconsin.

This was the first time in Fenway Park’s century-plus history that the Red Sox were the “road” team, according to Elias Sports Bureau.

Rowdy Tellez hit a solo homer for the Blue Jays, who had won seven of nine after taking the opener.

Josh Taylor (1-1) pitched a scoreless inning of relief for the win. Matt Barnes got the final three outs for his fourth save.

Making his first start for Toronto since being acquired from the Dodgers for two players to be named, Ross Stripling (3-2) gave up three runs in 4 1/3 innings.

The Blue Jays’ batters came to the plate with walk-up songs, and music blared in a nearly empty Fenway after Tellez’s shot landed in the first row of Green Monster seats.

They even played Toronto’s home song ‘Ok Blue Jays’ in the fifth-inning stretch – instead of the customary seventh.

Tellez’s drive cut the lead in half before Boston added a run when catcher Reese McGuire fired a pickoff attempt at second into centre field with the bases loaded.

In Game 1, Danny Jansen hit a two-run homer, Travis Shaw had a solo shot and the Blue Jays held off the Red Sox, 8-7.

“We know the type of team that we have,” said Toronto’s starting pitcher Tanner Roark. “We just keep clawing and scratching and fighting. We don’t give up.”

Shaw went 3 for 4 with a double off the top of right field wall, Tellez had two hits with a sacrifice fly and Randal Grichuk added a two-run single.

Muñoz went 3 for 3 with a two-run homer and an RBI double.

A.J. Cole (2-0) pitched an inning of scoreless relief and Anthony Bass got three outs for his fifth save.

Entering the day, Boston’s staff had allowed an MLB-worst 67 homers and owned the highest ERA at 6.13 – over a half run higher than the next worst, Colorado (5.51).

The Blue Jays didn’t take long to add to those numbers when they made it 3-0 in the second against Zack Godley (0-4). Shaw’s went into the seats behind Boston’s bullpen and, after Joe Panik’s walk, Jansen hit his into the Green Monster seats.

Toronto’s Teoscar Hernández went 0 for 3 in the opener, halting his 15-game hitting streak.

The Blue Jays entered the doubleheader averaging an AL-worst 3.74 runs per game in road contests.

Blue Jays: Manager Charlie Montoyo said INF Bo Bichette (sprained right knee) was “a lot better than thought he’d be at this time,” and he’ll hit in a simulated game against RHP Ken Giles on Saturday. … Montoyo also said Giles (strained right forearm) may do another simulated game or could be activated.

Red Sox: LF Andrew Benintendi (strained rib cage) has ramped up his workouts, but manager Ron Roenicke said they’re “waiting to see from the medical end where he is” as far as a possible return.

Both teams didn’t have a starter listed for Saturday night’s game. 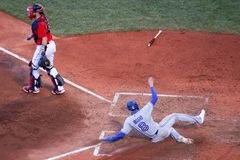