Roberto Osuna is getting a second chance with the Houston Astros. They also made it clear they won’t give him another one.

The All-Star closer met his new Astros teammates Sunday and addressed the club for 10 minutes in a closed-door meeting after completing a 75-game suspension for violating Major League Baseball’s domestic violence policy.

The defending World Series champions acquired Osuna on Monday in a trade with the Toronto Blue Jays while he was still serving his penalty. The reliever was arrested and charged with assaulting his girlfriend May 8 in Toronto. Few details have been made public and the next court date in the case is scheduled for Sept. 5.

“We believe that Roberto will not let us down,” the Astros said in a statement Sunday. “If there is any type of issue in the future, we will take immediate and decisive action — it will not be tolerated.”

Speaking with reporters in the dugout, Osuna revealed little about the morning meeting in the Astros’ clubhouse at Dodger Stadium and did not discuss the case pending against him. He was reinstated from the restricted list and added to the active roster before Sunday’s game against Los Angeles, with Houston pitcher Lance McCullers Jr. going on the 10-day disabled list due to elbow discomfort.

Osuna did not pitch in a 3-2 loss to the Dodgers.

Asked if he could shed some light on why he was suspended, Osuna replied: “Not right now.”

MLB handed Osuna the second-longest penalty since its domestic violence policy was enacted three years ago. The pitcher did not appeal.

“Because of the ongoing legal proceedings, very little can be said about the incident itself or the case involving Roberto,” the Astros said. “Our decision to acquire Roberto was based on the entirety of information that we gathered during our extensive evaluation. That included as much information as we could gather about the specific incident and the charges that were filed but it also included as much information as we could gather about his actions before and after the incident, as well as his personal reputation among his former teammates and coaches. The information regarding this specific incident weighed heavily on our decision but when evaluating the entirety of the information, we felt that Roberto deserved a second chance.

“We are now focused on ensuring that Roberto makes a positive impact off the field while he is a member of the Houston Astros,” the team added. “We welcome being held accountable for all of our personnel decisions. Time will tell which ones were right and wrong.”

Looking for late-inning relief help, the Astros acquired Osuna from the Blue Jays before last Tuesday’s trade deadline. The move raised eyebrows in the clubhouse and all around baseball after Houston had previously stated its no-tolerance policy regarding domestic violence.

McCullers and fellow starting pitcher Justin Verlander were outspoken about their disgust on Twitter at that time.

“Universally, this club has a hard time with domestic violence,” manager AJ Hinch said. “This is bad. I want us to know that this is bad. Domestic violence is bad, allegations are bad and we take them very seriously. But we are not involved in the court case. We are not aware of any of the details and we will have to react and respond and deal with it accordingly as it comes up.”

Osuna is well aware of the stir his acquisition has caused in Houston as he joins a team that supplied so much civic pride in the wake of last year’s devastating floods triggered by Hurricane Harvey.

Astros general manager Jeff Luhnow sat with Osuna as he addressed the media Sunday and said the decision to add him to the team was essentially his own. Luhnow said his hope is that Osuna’s presence with the Astros can ultimately turn into a “positive thing.”

“This was a tough decision,” Luhnow said. “Everybody had different points of view, but ultimately, I’m the one that made the decision to make the trade. My focus was on giving Roberto a second chance. I understand that it was going to raise conversation and awareness of this topic, and I’m OK with that.”

Luhnow’s plan is to have Osuna speak to Astros minor league players about the pitfalls of being a young athlete, while also becoming active in the Houston community.

“While there’s been a lot of negativity around it, I do ultimately believe that over the long haul we can turn this into a very positive event for our team, for Roberto personally, for everybody else that was affected, and for the community of Houston and our fan base,” Luhnow said. “That’s our goal. I think Roberto shares that goal, and we’re going to have to earn that.”

“Of course,” he said. “I’d like to put myself in a position to help people. I’m here to do what the organization tells me. This is an organization that has a good relationship with the city of Houston, and I’m going to do my best to do what I can.”

“I don’t really know what happened; I don’t think anybody does,” he added. “I think it’s a tough situation. ... My dad’s a defence attorney so until you’re proven guilty of something you’re innocent, as far as I’m concerned. I definitely believe in second chances and that’s all I’m really going to say about this.”

Luhnow also made a point to address female Astros fans who are struggling with the team’s decision to add a player accused of domestic violence.

“I think the conversation is incredibly important and valuable,” Luhnow said. “There are a lot of components to the conversation. We do need to have it, and it’s a sticky conversation, the topic of any sort of alleged abuse, the topic of domestic violence. There’s also some related topics of condemning someone with no information. I see a lot of that out there. There’s not a lot of people that have real information about what happened or who the person is, and yet they’re pretty quick to judge and condemn.”

Hinch said he wouldn’t hesitate to use Osuna and would like to get him into a game as soon as possible. The 23-year-old right-hander is the youngest pitcher in major league history to reach 100 saves.

Hinch also seemed aware that even though Osuna has joined the Astros, the controversy might not subside any time soon. 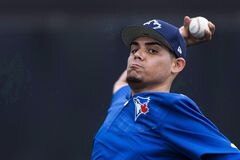 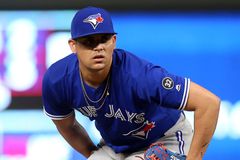 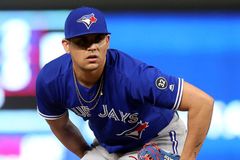