Let’s check in with the Toronto Blue Jays, who are one-quarter of the way through their season.

This doesn’t mean baseball is one-quarter done. Baseball’s all over the shop.

The Tampa Bay Rays have played a third of their 60-game season. The St. Louis Cardinals have played five games.

At this rate, the Cardinals will be playing their home opener while the Yankees and Dodgers are playing in the World Series.

This is one of those instances where everyone told you it was a bad idea and you agreed it was a bad idea, but secretly thought to yourself that bad ideas sometimes have this wonderful way of turning out to be sneaky, amazing ideas. Like the light bulb.

And then it was an even worse idea than anyone had guessed. That’s the 2020 Major League Baseball season.

Is anyone watching this? Does anyone take it seriously? Based on the amount of free-floating baseball talk in the ether … tilts head toward the silence; hears a raccoon screeching in the distance … that would be a no.

And people will care far less once the NBA playoffs begin on Monday.

No, 2020 has become baseball’s season that never was.

That’s great for Toronto because – let me just look through a few printouts here to see if … yes, here it is – the Jays are still not good. Again.

As of this writing, the team is 6-9, headed toward last place in the American League East. If you have registered them at all, it has probably been watching them blow leads in creative ways. They are the Picassos of walk-off losses.

It’s hard to pinpoint when the rebuild started because it never really did. Instead, the Jays settled on a baseline of mediocrity some time in 2017, then did nothing to improve the situation beyond praying to the Gods of Player Development.

Whenever some apostate began to wonder what the team was doing in the free-agent market or via trade, he’d be told to get down on his knees and reaffirm his faith in the holy beneficence of the draft. The draft will provide.

Well, what has the draft provided?

As of now, the Jays have one bonafide star – Bo Bichette. He’s come out of the box as advertised.

Every other Blue Jay is somewhere between okay, vaguely worrying and not worth the effort. In particular, the shine is coming off last year’s baseball saviour, Vlad Guerrero Jr. Guerrero showed up at this year’s spring training in the best shape of his life. Then he showed up at summer training in the best shape of some other guy’s life. This other guy being the sort of person who is not a big believer in portion control.

A year ago, the Jays waved off the idea of moving Guerrero away from the physical rigours of third base as hysterical negativity. Today, Guerrero is a permanent (and not particularly good) first baseman.

Next year, he’ll be a full-time designated hitter. And the year after that, he will begin taking his plate appearances while sitting on the bench, using a really long bat.

Guerrero isn’t a bust. Not yet. But based on the amount of hype that accompanied him on the way up to the bigs, he is headed at speed in that direction.

The other member of Toronto baseball’s youthquake, Cavan Biggio, is becoming a serviceable major-league second baseman.

That’s nothing to wave at. Dependable second basemen are hard to come by. Ask poor Devon Travis. But this is not exactly shaking down as the Murderer’s Row lineup people were expecting.

Every other outfield player works only in service of the development of these three younger men. The only one distinguishing himself is Teoscar Hernandez, a journeyman thrown in to a deadline deal a few years ago. All of a sudden, in his late-20s, Hernandez may have figured something out.

Lineup wise, that’s what the Jays have got – one blossoming Derek Jeter, one even-more-blossoming Prince Fielder, an affordable Aaron Hill, a knockoff Jose Bautista and a bunch of people who do not rate comparisons. On a nightly basis, you’d be hard-pressed to remember who they all are.

On the pitching end, two guys matter. Hyun-Jin Ryu was the baseball equivalent of announcing that you are buying a round of the best bubbly, and then pull out a bottle of prosecco. I mean, it is bubbly. But it’s not champagne.

If the point of getting Ryu was announcing to the baseball world that the Jays have arrived, it hasn’t worked out that way. Like so many of his teammates, Ryu is the sort of player who bleeds into the background. Even when he’s pitching well, he doesn’t dominate opponents.

That is meant to be Nate Pearson’s job. It is unfair to judge a 23-year-old when he’s been in the majors for two weeks, so let’s do that.

Pearson showed up in his debut like he’d ridden into town on a lightning bolt. Then he pitched again (not so well). And again (very not so well).

Now it’s beginning to dawn on him that major-league baseball teams have video equipment and the intention to use it. Pearson may in the end be the star everyone has hoped for, but not the sure thing everyone was sold.

So, so far, so mediocre. The Jays have made some changes, were given a mulligan year to test them out and remain pretty much the same team they were last season.

Lucky for them, nobody’s paying attention. The few fans who do are as docile as old dogs. These are the same people who nodded along as the team gutted its high-end talent, put all the money it was saving in its own pocket, raised ticket prices and then explained how hoarding cash is integral to dynasty building.

When you wonder why the Jays won’t change, that’s why.

Those fans will buy this, “We’ll get ‘em next year fer shure,” nonsense from now until eternity. Which, in the end, it may be. 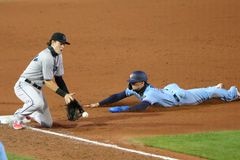 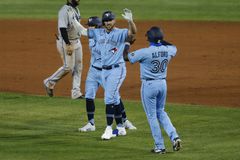