After years of dithering, the Toronto Blue Jays finally did something ambitious over the weekend. They overpaid for free-agent pitcher Hyun-Jin Ryu.

Ryu, 32, was the runner-up for the National League Cy Young Award last season. Several of the years before that were spent being shunted on and off a gurney. He’s a big man in athletic middle-age with a lot of miles on him and the four-inch-thick medical file to prove it.

But he is at least someone other teams wanted as well. Which is more than can be said for just about anyone else the Jays have acquired in the last while.

All his other prospective employers just didn’t want him enough to give him a US$80-million, four-year contract.

That dollar figure is a funny number. It’s too much for a player with Ryu’s risk profile, and too little for a genuine superstar. Despite the fact that Ryu’s contract represents a significant tax-bracket jump for the Jays, it’s a neither/nor deal. Neither big enough to make you a contender, nor small enough to make you a rebuilder.

That puts the Jays somewhere in the middle now.

By the standard of this organization, that’s significant progress. If the attempt to win a title can be said to be a battle, the Jays have spent the past few seasons as Major League Baseball’s conscientious objector.

The deal makes a lot of sense from Ryu’s perspective. He’s coming off one magnificent campaign and looking to cash in. The Jays were the team willing to give him his slot hit.

What’s more curious is what the Jays are looking to get out of it.

Ryu becomes their gold-plated No. 1 starter. If healthy, he should be what they’d always hoped Marcus Stroman could be (and too rarely was) – a pitcher who can steal wins on his own.

But after Ryu, the quality of the rotation goes off a cliff. It’s all journeymen, emergency-room frequent flyers and kids.

Baseball has taught us in the last little while that a bona fide contender requires two or three starters who are of the front rank. Then it needs a bullpen that can crush an opponent’s hope from the seventh inning on. The Jays still don’t have those things.

A contender needs quality up and down the batting order. The Jays don’t have that.

And it should have enough depth to cover off the inevitable bumps and tears that go along with playing a sport that relies heavily on body torque. The Jays have plenty of players. I’m not sure how many of them qualify as depth.

So Ryu can be one of two things to the Jays.

He can be the opiate of the masses. As in, a quick high that allows you to forget your problems, but doesn’t do much to solve them.

You can see the rationale for such a thing. The Jays’ “hold the line and wait for our glorious future” manifesto worked for a while. But after people spent most of 2019 getting a good look at the team’s saviours – Vlad Guerrero Jr., Bo Bichette and Cavan Biggio – their faith wavered.

They are all talents, but rough ones. Guerrero in particular was preposterously oversold. No one short of the risen baseball Christ was going to live up to that kind of hype. So a rookie season that would have been judged quite good by any sane measure ended up feeling like a major letdown.

Understandably, that left observers saying, “What else you got?”

All the old equivocations about windows opening and closing and payroll parameters stopped landing, even with the most committed rebuild evangelists. Team president Mark Shapiro and general manager Ross Atkins had always been slaughtered in certain quarters, but now their supporters turned on them. That took a while to sink in. While the Jays were hallucinating about getting Gerrit Cole, the Yankees went out and got him.

In the public-relations business, this is what they call an imaging problem. As in, whenever they see your image, people feel a strong desire to start doodling on it.

Acquiring Ryu eases that pressure: “See? We spend money. We spend all sorts of money. Money spending is our thing.”

That only works if this isn’t the end of the money spending.

That’s where Ryu can become the second thing – the initial brick in the wall.

The Jays are not contenders this year. Ryu can show up and pitch like golden-era Sandy Koufax, and they still aren’t contenders.

Jumping to the next level happens only if Ryu is the first of several signings and/or ambitious trades.

It needn’t happen tomorrow. But it has to start happening soon, now that there is finally some hint of momentum.

If the Jays are still standing around at the end of next season pointing at Ryu as though he’s proof they care, this was them heading down the opiate route.

If they’re out there actually getting people – rather than just talking about it – this was proof they finally felt some urgency to win. Every team president and GM gets a certain amount of rope when they take the job. Perhaps Shapiro and Atkins have finally begun to feel the tugging.

Because what gets lost in splashy signings is that they aren’t proof you’re doing your job. Winning is the only proof.

The current Jays executive group has been on the job for four years. They’ve spent all four of them disassembling the playoff team they inherited and watching it get steadily worse.

Four years is plenty of time to spend reorganizing your office. Now it’s time to start making the team demonstrably better. It’s time to stop talking about what might happen, could happen or should happen, and make things start happening.

So we have yet to see what the Ryu signing means. It’s certainly a good first step. But it won’t mean much if it’s the last one. 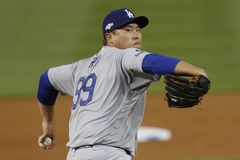