Though it’s not yet clear if the Toronto Blue jays will rid themselves of pitcher Marcus Stroman, they would like everyone to know they are doing their best.

Every few days now, Toronto’s top pitcher (on paper) is linked by reliable sources to a new club. At the moment, it’s the San Diego Padres.

This isn’t a case of loose lips sinking trade ships. It’s an ad campaign. The Jays want everyone to know a) Stroman is available; and b) that even if they can’t do a deal, Lord, how they did try.

Three years ago, after his fine run into and through the postseason, you’d have said Stroman was a cornerstone of the Jays’ future. Now he’s being run out of town on a rail. How did it get here?

Stroman is a victim of several things – a bad year, a terrible team, poor timing and himself.

The last of those factors gets the most play.

Stroman is like a lot of twentysomethings who’ve found a little money and success – he can’t stop talking about it. He regularly puts you in mind of something once cattily said of John Updike: “Does the son of a bitch ever have an unpublished thought?”

If you are famous, social media is a vast field of rakes. That’s where Stroman does his jogging. On Saturday, as the San Diego rumours hotted up, he was denying their basis in truth, retweeting fans begging the Jays to keep him, and promoting his clothing line and coming hip-hop album. It was a remarkably compact précis of America’s early 21st-century tics and manias.

In late 2017, the nadir of this online obsession saw Stroman publicly celebrating a Gold Glove win just hours after Roy Halladay had died in a plane crash. If some people are tone deaf, Stroman is earless.

As you might suspect, it didn’t go over very well.

Then Stroman’s season went the same way – a lot of jibber-jabber on the way in, an abysmal start, “shoulder fatigue,” a long stint in the minors and an ineffectual return.

Bad years happen to good players. But when they happen to players who’ve thrown a rod because they didn’t get their way in arbitration, the team starts to develop a grudge.

When the Jays finally decided that a full teardown was the way to go, Stroman became surplus to needs.

He’s a free agent in two years time – meaning he will be relatively cheap when no one cares how the team does; and expensive once the team gets good again. There is no way on God’s green earth Toronto would consider reupping Stroman once he enters the silly-money stage of his career. That makes him a man out of time.

If he could be counted on as a mentor or a box-office draw, it might be worth keeping him in the interim. But he isn’t either of those things.

Stroman is instead the Phil Kessel of baseball – valuable to a contender; a liability to anyone else.

A winning clubhouse can afford a couple of Stromans – a talented, me-first guy who won’t stop talking about how much he’s overcome (degree from Duke; first-round draft pick; US$1.8-million signing bonus; the familiar hard-luck story).

A bad team cannot afford a single one.

Some people can put losing into perspective. We already know Stroman isn’t one of them.

Late last year, he got down in the grocery aisle at Fenway Park and flopped around for a while after getting a postloss question he didn’t like. He called his own team “terrible” – which it was – and then tried to make it better by playing ‘Fun With Words’ on social media.

According to Stroman, he meant terrible “right now” – I suppose, in that specific instant, and not the one after – and blamed the media for perverting his intentions.

It would probably have been a lot easier to say, “I was frustrated and I overreacted.” But nothing is ever easy on a losing team.

Just about every important cog on this year’s Jays will be young and impressionable – that includes first-time manager Charlie Montoyo. You do not want the impression being “loudest voice gets heard.”

So once your ostensible star has begun using Zeno’s Paradox to explain away temper tantrums, it’s time to start thinking about how to frame the break-up. Maybe, “It’s not you, it’s your pitching.”

No matter how inevitable this all seems now, there is an element of passive-aggressive lesson-teaching going on here.

Stroman could be dealt on the sly or shipped off quickly for the best possible offer. That’s how Toronto did it with other players it needed to jettison at maximum speed, such as Roberto Osuna and Josh Donaldson.

Instead, the Jays have stood Stroman up in the front window of the team gift store and invited everyone in baseball to gather round and take a look. The longer this goes on, the more widely discussed it becomes. That doesn’t cost the Toronto Blue Jays anything, but one can imagine how much of an ego deflater it is to a player who lives his entire life in the public eye.

The Padres are a terrible team with the deepest farm system in baseball. According to reports, they are not offering any of their best talent for Stroman. They’d prefer to give the Jays some mid-tier minor-leaguers, the sort who may or may not become major-league regulars some day.

What they’re saying is – “We need your guy to fool our fan base into thinking we’re going to consider winning baseball games this year. Once they’ve figured out that isn’t happening, the really exciting players will start arriving.”

The Jays have decided that "anyone, some day, maybe" is better than Stroman right now at what should be the affordable peak of his powers. It’s that bad.

It’s still a win-win for everyone involved. Even Stroman.

He’s built his personal brand on the idea that everyone doubts him. Good news. Evidently, they do. 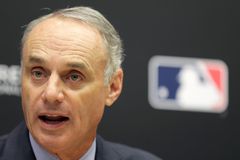