We live in an age of unbridled white id.

Many days it is anything goes, baby, from the White House to the baseball stands; objecting often draws a scornful wave of the hand and a lecture on political correctness.

The latest eruption comes courtesy of Josh Hader, a 24-year-old white relief pitcher with a smoking fastball and a Twitter account filled with hideous thoughts typed when he was 17 and 18. A Hader sampler: “White Power, lol” (with an emoji of a clenched fist), “KKK” and, “I hate gay people.” He also used that vilest of words for black people.

This all came to light as Hader pitched in the All-Star Game last week. After the game, he mumbled something about being influenced by rap lyrics. Then he abandoned that tack and began apologizing profusely. “I was 17 years old, and, as a child, I was immature,” he said, “and obviously I said some things that were inexcusable.”

Point of information: A 17-year-old can drive or serve in the military, and is a year away from voting. That does not describe a child. I’m not unforgiving of youthful stupidity, although it would have been swell if reporters had asked obvious questions: How was it that you attended an integrated high school in exurban Maryland and yet posted racist and homophobic comments? From what sewer line did those sentiments bubble up?

The more breathtaking moment, however, came nights later when Hader walked to the mound in Milwaukee in his first appearance since the all-star break. Thousands of fans, nearly all of them white, rose and gave him a standing ovation.

Who knows precisely what was on the mind of each fan who stood? Intelligence often fails to march in step with fandom. Hometown players – including Milwaukee’s Ryan Braun – are applauded after they lie about steroid use and, in Braun’s case, try to ruin the life of a drug tester.

This, however, is a white behavioural moment worth exploring, and I type these words as a lifelong member of that race.

Let’s pose a counterfactual: Josh Hader is black, and an excavation of his Twitter account reveals that he called whites “crackers,” wrote of his hatred for them and endorsed an organization that engaged in genocidal violence against whites. One of his tweets included a picture of a clenched black fist. That black pitcher had also expressed hatred for gays and made graphic, misogynist statements.

I’m trying to imagine thousands of white fans rising to their feet and giving him a standing ovation, even after he apologizes and blames youthful indiscretion. Or, rather, I’m trying and failing. We know what happened when a few black football players of good character took a knee to protest police violence against black Americans: They were pilloried by the President of the United States and received no standing ovations.

Some are now unemployed.

Billy Bean, a former player who is gay, is the league’s sensitivity and diversity firefighter. If a player says something recondite or distasteful, you can look for him to come walking through the clubhouse door. He talked to Hader and oozed empathy afterward. “I sympathize for him tremendously,” Bean said. “I was really proud of him today.”

The Milwaukee news media did no better. As fans rose to clap, a writer from the Journal-Sentinel posted on Twitter: “Josh Hader announced as new Brewers pitcher and gets a nice ovation.”

“Josh, that was an overwhelmingly positive reaction,” one said. Do you worry, Hader was asked, that maybe in “other parts of the country, that could get misconstrued a little bit?”

Baseball, once a sport with so many black stars, has fallen into an uncomfortable racial ditch. It has fewer and fewer black players and its fan base is the oldest and whitest of the three major American sports. Nielsen reported in 2013 that the average baseball television viewer was in their mid-50s, and 83 per cent of them were white. NBA games, by contrast, drew an audience that was on average 40 years old, and 45-per-cent African-American.

For far too long, too many baseball controversies have centred around older, white baseball men complaining about so-called insults to the game. So Ken Griffey Jr. – a transcendent African-American outfielder and Hall of Fame member – was criticized for wearing his baseball cap backward in practice. Jose Bautista, who was born in the Dominican Republic and now plays for the New York Mets, was slammed a few years ago for having the audacity to flip his bat after whacking a game-winning playoff home run for the Toronto Blue Jays.

Such controversies almost always revolve around black and Latino players. As Bautista wrote afterward in The Player’s Tribune: “Let’s not have these loaded conversations about ‘character’ and the integrity of the game every time certain players show emotion in a big moment. That kind of thinking is not just old school. It’s just ignorant.”

A couple of years ago, I spent a day in the company of Curtis Granderson, as thoughtful and public-spirited a player as you can find, and a black man born and raised near Chicago. He spoke of the oddness of playing a sport that draws so few black fans.

“We play this game, me and other black players, counting the black people in the stands who weren’t working at the game,” Granderson said. “ ‘I see one! No, he’s Latino.’ You’re panning, panning and sometimes it would take us seven innings to count 10.”

I played my version when the Cubs played in the 2016 World Series. Come the fourth inning, I walked from Wrigley Field’s ancient press box to the farthest reaches of right field. My goal was to count every black fan I saw. I found two sitting hard by the right field fence.

Each year, Richard Lapchick of the Institute for Diversity and Ethics in Sports issues a report on racial hiring in baseball. As recently as 2009, baseball had 10 black and Latino managers. Now it has four. There is the tiniest handful of blacks and Latinos in baseball front offices.

Commissioner Rob Manfred loves to talk of pipelines and training initiatives and so on, but he has had remarkably little success in persuading teams and owners to hire more blacks and Latinos.

When I asked Manfred about this, he got snippy. “We’re going to have ebb and flow,” he said.

Not much is flowing. I don’t want to pick on Midwestern teams when my own childhood team, the Mets, is so close at hand and offers such an inviting target. One member of the Mets’ weird three-headed general manager team is Latino, but the rest of the organization is lily white. The team has no black or Latino vice-presidents.

Like Chicago, New York is a majority minority city. Yet you can sit in the stands at Wrigley or Citi Field some nights and it looks like 1955. In Milwaukee the other night, it even sounded like 1955. 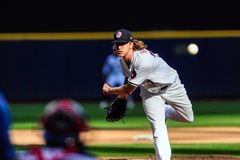 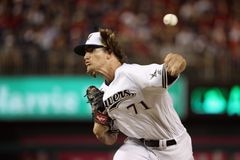