Vladimir Guerrero Jr. has played long enough since returning from an oblique injury that Buffalo Bisons manager Bobby Meacham said that at this point it’s all about assessing quality of play, not health.

The Toronto Blue Jays moved their top prospect from Class A Dunedin to triple-A Buffalo in time to start a four-game International League series against the Scranton/Wilkes-Barre RailRiders in Pennsylvania on Thursday night.

“I’m not really watching for any injury, I’m just watching for how he’s progressing, just as a player,” Meacham said before the series opener when Guerrero batted third as the designated hitter. “We want to make sure what he started to do last year continues on to this year.”

Guerrero looked the part with a three-run homer and an RBI double as the Bisons lost to Scranton/Wilkes-Barre 9-8 on Thursday in 10 innings. He was 2-for-4 with a walk and two runs scored. In 280 professional games coming in to Thursday’s game, the six-foot-two, 250-pound power hitter had walked (147) more often than he’s struck out (137).

Guerrero played four times in six days in Dunedin and had Wednesday off to travel. Following rehab plans from the organization’s medical staff, Meacham said Guerrero will play again Friday as the starting third baseman.

Meacham has only crossed paths with Guerrero once this spring for two at-bats in a spring training game. But he has a distinct impression of Guerrero from the last of the 20-year-old’s four stops as he quickly climbed through the Blue Jays minor-league system in 2018, his highly successful third season in professional baseball.

“He’s got a plan to start with but when they get two strikes on him, he still is able to cover the whole plate,” Meacham said. “I think part of it is because he’s confident. He’s done it before, which is what gives you the confidence.

“But, he’s also humble enough to know that there’s a lot of work to be done.”

Guerrero hit .381 with a .437 on-base percentage and .636 slugging percentage a year ago across four minor-league clubs. He had a 20-homer season as a teenager.

Meacham said Guerrero is already able to accomplish what most players are “trying” to do. It starts with a patient approach to the early pitches in each at-bat.

“The one main thing, I think, watching him hit is that he’s not swinging at pitchers’ pitches, specifically early in the count,” the manager said. “He’s waiting for them to make a mistake early and when they do, he’s ready to jump on it.”

Because of Guerrero’s advanced approach at the plate, the manager, who played 457 games as an infielder for the New York Yankees, is more likely to provide a defensive assessment.

“Make sure you get your feet quicker, make sure you can be agile enough to move around at third base when the ball is coming down there pretty quick,” Meacham said of what he will be evaluating. “We’ll leave the hitting up to him.

“I’ll let him figure that out.”

Guerrero took groundballs at third base during the Bisons batting practice Thursday.

Ben Cherington, Toronto’s vice president of baseball operations, is also in town for the series, but Meacham said that Cherington’s presence is routine for a series at Scranton/Wilkes-Barre. Other instructional staff are also with the team on a rotating basis, but no additional staff are in place to evaluate Guerrero while the Blue Jays decide when to schedule his Major League debut.

Guerrero batted .336 with six home runs and 16 RBIs in 30 games with Buffalo last season. He started this season 4-for-15 (.267) with Dunedin in the Florida State League where he had a double, two runs and an RBI.

The son of 2004 American League Most Valuable Player Vladimir Guerrero was signed by the Blue Jays as a 16-year-old. 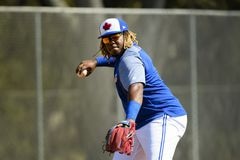