A 13-pitch, ninth-inning at-bat from rookie Vladimir Guerrero Jr. may have ended in a double play, but it had his Blue Jays teammates and manager filled with marvel on Sunday.

“I’ve never seen somebody hit a double-play ball and get a standing ovation from the fans,” Blue Jays manager Charlie Montoyo said. “That at-bat with Vladdy, against the best closer in baseball, was just awesome.

In the final inning of Toronto’s 1-0 loss to the New York Yankees, Guerrero was called on to pinch-hit for catcher Reese McGuire. Brandon Drury had led off the inning with a sharp single to left field, ending a brilliant two-hit performance from Yankees starter Masahiro Tanaka.

In came closer Aroldis Chapman, in search of his 31st save. He swiftly went ahead on Guerrero with two swinging strikes on four-seam fastballs.

Then the fun began.

Guerrero fouled seven of the next 10 pitches while taking three balls. Chapman mixed some mid-80 mile-an-hour sliders with 100 mph fastballs. Guerrero got ahead of one of those sliders on the sixth pitch and hit a shot off the facing of the fifth deck, 20 feet to the left of the left-field foul pole.

After that swing, the 27,790 fans inside the Rogers Centre and players milling about in the dugouts and clubhouses were extra excited about this battle.

“I was sitting beside [injured pitcher Ryan] Boruki in the locker room, and our hands were sweating,” said Blue Jays starter Trent Thornton, who bounced back with a strong three-hit, six-inning outing of his own.

“If he connects, that thing is going a long, long way.”

Guerrero finally hit a ball into play, a hard-hit shot to Gleyber Torres. The Yankees shortstop flipped a throw to second baseman DJ LeMahieu, who relayed a throw to first for a double play.

“That’s obviously, in a lot of ways, the ball game there,” Yankees manager Aaron Boone said. “In a very well-played, 1-0 game you’ve got a young, rising, great-looking hitter against the game’s dominant closer. It was a great match to watch those two guys go at it.”

Blue Jays shortstop Bo Bichette ripped a single to left field for his second hit of the game to keep the inning going. But Chapman finally ended the proceedings by striking out Cavan Biggio.

“It took Chapman 27 pitches to get out three young guys,” Montoyo said. “That was pretty cool.”

Bichette has reached base in each of his 14 games to extend his club record to start a career. The Blue Jays have gone 9-5 since he was promoted from triple-A Buffalo on July 29.

“This past a week-and-a-half it’s been a fun atmosphere in the locker room, and hopefully we can keep it going the rest of the year,” said Biggio after Toronto split its four-game series against the Yankees.

“These past four games against one of the best teams in the whole league shows that we’re able to compete right now.”

The only run of the game arrived in the fifth inning. Thornton (4-8) was perfect through four innings. He retired the first 12 batters he faced, striking out six, getting three Yankees to fly out and three more on ground-ball outs.

The powerful Yankees lineup finally touched Thornton for a run in the fifth inning. Toronto centre fielder Teoscar Hernandez misread a fly ball from Gio Urshela that dropped in front of Hernandez for a double. Urshela scored on Brett Gardner’s ground-rule double to right field.

Neil Ramirez will start for Toronto in its opener against the Texas Rangers on Monday. The 30-year-old Ramirez signed a minor-league deal with the Blue Jays last Tuesday after being released by the Cleveland Indians on Aug. 2 He was promoted from Buffalo on Sunday. Reliever Jason Adam, who picked up his first Major League win in the Blue Jays come-from-behind 5-4 victory on Saturday, was optioned to triple-A Buffalo. 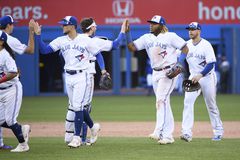 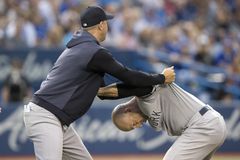 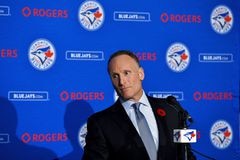