When the Houston Astros were first accused of sign-stealing in 2018, they explained that what they’d been doing was actually the exact opposite.

“We were playing defence,” Astros general manager Jeff Luhnow said at the time. “We were not playing offence.”

Like most effective lies, this one was half-true. The Astros did not have a person stealing signs from centre field. They had a simpler way of doing it.

At home, they put a camera in centre field. It fed into a monitor set up in the hallway leading to the Astros dugout. Someone watching the monitor would then relay in the rough parameters of the next pitch – off-speed or fastball – by slamming or not slamming a nearby trash can. The system was so stupid that it was brilliant.

The story broke again with new details in November, shortly after the Astros lost the World Series. On Monday, Major League Baseball determined the allegations were true and issued punishments.

Luhnow and Astros manager A.J. Hinch were suspended for a year (it quickly got worse for them). The team gets a multimillion-dollar fine and loses a bunch of draft picks. It is, as people love to say when this sort of thing happens, unprecedented.

This cued a lot of woo-hooing and celebratory finger pointing. The most hated team in baseball was finally getting it right in the head.

But there are two sorts of cheating in sports – a good kind and a bad kind. The good kind works. That’s the one Houston just pulled off.

Over the past three years – the alleged time frame of this scheme – the Astros have been to three American League Championship Series, two World Series and won a championship. The franchise was transformed from a local embarrassment into the most successful team in baseball.

MLB does not have the power to change history. You can’t strip those accomplishments. Even if you could, no one would care because you can’t relive a moment. Ask any Olympic athlete who gets their medal in the mail three years after some doper stole it from them.

Decades ago, we might have spoken of the “stain” of this caper, à la the Black Sox scandal.

But since then, no team sport has so embraced dirty tricks as baseball. Everything from spitters to greenies to the expanding circumference of Barry Bonds’s head.

Alex Rodriguez is a proven and prolific drug cheat who threw his own courier cousin under the bus when the cops caught his scent, and he is now one of the game’s most beloved analysts. We won’t even get started on Pete Rose, who’s somehow morphed from the Amarillo Slim of shady prop bets into the crabby uncle who tells you how baseball really works on Fox Sports.

Most sports tolerate cheaters. Baseball loves them – as long as they got away with it. The Astros just did.

The players were the most obvious beneficiaries of this scheme (the Astros were top three in the game in runs, hits, home runs and walks last season). None of them will be punished.

Instead, Luhnow and Hinch are the goats. Shortly after they were suspended, the team fired the pair.

Every baseball team needs a quality set-up arm out of the bullpen and a back-up catcher. No team needs a particular GM or coach. They are entirely superfluous. Houston just proved it by jettisoning the ‘architects’ of its dynasty.

Now the pair will stagger off to live out their lives in squalor and shame. Or maybe get a network job. More likely the second thing.

The team writ large doesn’t suffer. It’s still run through with all-stars, most of them not yet in their primes.

The US$5-million fine is meaningless in a pro-sports context. Losing the picks will hurt, but not until years after this episode has passed into history.

And so the interesting question here isn’t, “Was justice done?” (When is it ever?)

I am pretty close to positive the Astros would. What they did was demonstrably wrong, and it worked out perfectly.

We can argue whether those stolen signs were the difference between being good and being great. But if you were now the morally ambivalent owner of a championship ring, would you take the chance of trying it again with no extralegal help? Probably not.

It wasn’t just that cheaters prospered in this instance. Baseball also let them off the hook. Had allegations this substantive been left hanging out there, they’d have followed the team around for years.

But now we know. And so there will be a few days of frenzy, a bunch more questions on the first day of spring training and that’s it. Baseball will move on.

If the goal here had been to truly punish the Astros – had anyone genuinely cared – there were meaningful remedies. You could suspend everyone who had an at-bat in a Houston uniform last season. You could ban everyone involved for life. You could shut the entire Astros franchise down for a year or two.

Those penalties would have actually hurt, but not just the Astros. They’d have impacted all the other franchises in baseball who split revenues with Houston, the team’s broadcaster, the Houston tourism board, the local guy who likes watching baseball, every bar near the ballpark and on and on.

And then there’s the small matter of the Boston Red Sox, who are still accused of a similar scheme. You going to shut them down too?

That’s the problem with going after a rogue sports franchise – like banks, they are too big to fail.

So instead we get half-measures and a lot of grand talk about integrity by some of the same people who’ve proved in the past that their own is for sale. 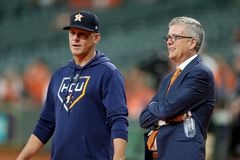 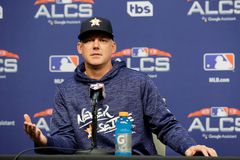 Cleveland pitcher Trevor Bauer makes the case for doctoring the ball
May 2, 2018 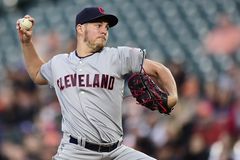