Even if Vladimir Guerrero Jr. and Lourdes Gurriel Jr. had been in Toronto’s lineup, the Blue Jays likely would not have beaten Seattle Mariners starter Yusei Kikuchi on Sunday.

The Japanese left-handed pitcher threw a complete-game shutout, struck out eight and retired his final 17 batters in a row in a 7-0 win against the Blue Jays.

Before Toronto’s (52-75) third loss in four games, however, they received good news when Guerrero’s MRI exam showed no serious damage after he left Saturday’s game with left-knee pain. Blue Jays manager Charlie Montoyo said Guerrero is a possibility for the opener of Toronto’s three-game series in Los Angeles against the Dodgers on Tuesday.

“The MRI showed some inflammation, but he’s not bad,” said Montoyo, who has also been without Gurriel since Aug. 8 as the second baseman recovers from a strained quadriceps. “[Guerrero] took a day, and we’ll see how he feels on Tuesday.”

Guerrero had tweaked his knee, cutting off a ground ball in the second inning of a 4-3 loss to Seattle. He had also suffered a left-knee strain that kept him out of the lineup in double-A last summer, but this ailment is unrelated.

“I didn’t feel that uncomfortable, because I knew it wasn’t that bad,” Guerrero said before the game though interpreter Hector LeBron. “I just wanted to be cautious about it, and I just decided at that particular moment that I should stop and talk to the trainers, just to be safe.”

His teammates were relieved to hear the positive news.

“You don’t want a guy like Vladdy going out right now, when he’s making his mark in the big leagues,” Blue Jays pitcher Thomas Pannone said. “He’s got off to a really hot start, and he’s a big piece of this team. It’s great news he’s not injured.”

Without having to face Guerrero and Gurriel, Kikuchi (5-8) needed only 96 pitches for his complete-game victory.

The only time the Blue Jays threatened was a leadoff double to left field in the third inning from Guerrero’s replacement, Brandon Drury. But Kikuchi coaxed Danny Jansen into a fly ball to left field. Billy McKinney then popped to short, and a line drive to short from Bo Bichette stranded Drury at second base.

“I’ve never actually thrown a complete game under 100 pitches in Japan, so I’m really happy that I was able to do that here,” said Kikuchi, who at 28 is in his first year in Major League Baseball. He was winless in his previous eight starts.

Seattle checked in with three runs in the fourth inning off Pannone. Austin Nola led off the inning with a solo blast to right field and then catcher Tom Murphy smacked a two-run shot with Daniel Vogelbach aboard.

Mariners outfielder Keon Broxton added a homer to centre field in the seventh inning to increase his team’s lead to 5-0. Broxton scored again in the ninth inning. He drew a leadoff walk and was driven home on Dylan Moore’s double down the right-field line.

Moore scored on a Tim Lopes single to centre. 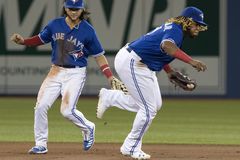 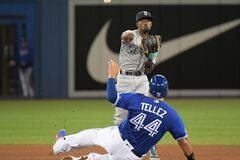