If someone made a horror flick about the Toronto Blue Jays, the loudest screams would be occasioned not by Jose Bautista's scowl or Adam Lind's beard (in a flashback), but by a singularly frightening sight: that of the bullpen door opening.

And the scariest part is Jays' management produced this nightmare with its eyes wide open.

It has become painfully apparent, going right back to spring training, that the people who run the Blue Jays aren't serious about winning, not really. If they were, they'd have assembled a complete major-league roster, one boasting not only bashers and fine fielders but pitchers who can consistently get batters out. They didn't do that. In an off-season when the need for pitching, particularly in the pen, was all too obvious, they spent their capital mainly on position players.

With predictable results: Their starters – all at either the end or the beginning of their careers – work at best into the middle innings, then turn the ball over to a shockingly barren bullpen heavily reliant on two out-of-nowhere 20-year-olds, with not a single experienced, lights-out reliever in sight. Not one.

Championing youth is terrific. Leaning on youth – to cover an abject failure to acquire established arms – is not only foolish but possibly detrimental to the long-term development of these very talented youngsters.

Selling fool's gold to Toronto sports fans, meanwhile – fans who, Lord knows, have suffered enough, not only in baseball but in pucks and hoops, too – is insulting with gusts to nonsensical.

What isn't clear is exactly where the blame lies.

This is a fan's rant, not an insider's, so I won't pretend to know just how tight owner Rogers has pulled the purse strings. (Full disclosure: I'm a former Rogers employee.) It is a matter of record, though, that the Jays have the 10th highest payroll out of 30 major-league clubs, and it's clear how general manager Alex Anthopoulos has chosen to spend the money.

Credit where it's due: He filled the gaping hole at second base by acquiring remarkable young Devon Travis from the Detroit Tigers. More ballyhooed moves were admirable and welcome – Josh Donaldson at third, Russell Martin behind the plate.

But pitching? Not much. In fact, the Jays traded useful starter J.A. Happ to Seattle for left-fielder Michael Saunders, who was required because the club wouldn't pay the price to keep hard-hitting incumbent Melky Cabrera. (Happ, by the by, has been the Mariners' most consistent pitcher, with a far better earned-run average than any current Jays starter.)

No, Anthopoulos couldn't know budding ace Marcus Stroman would tear up his knee in spring training, but hurlers are a fragile lot and a GM's job is to employ viable backups. The Jays' starting staff is hardly deep, anchored by grizzled innings-eaters Mark Buehrle and R.A. Dickey, filled out by early twenty-somethings Drew Hutchison, Daniel Norris and Aaron Sanchez. Nothing scary there, at least to opponents.

In the pen, the only notable acquisition was long man Marco Estrada, in a trade for Lind. There is no real closer, not even reliable setup guys; lefties Brett Cecil and Aaron Loup, the supposed stalwarts, have struggled. The great saviours, in the absence of seasoned help, were suddenly the aforementioned 20-year-olds, rookie right-handers Miguel Castro and Roberto Osuna, who'd been long shots even to make the big club let alone be called on to close out games before the screaming faithful at Yankee Stadium and Fenway Park.

They're marvellous – strong-armed, full of promise and poise – but if they're your top options in the jittery late innings, you have a fatally flawed roster. As for manager John Gibbons, I've always been skeptical of his reputation as a deft handler of bullpens, but it's hard to blame an explosion on a guy who's been left to juggle hand grenades.

There is no disputing the importance of the pen. Look at Kansas City last year, propelled into the World Series on the arms of a formidable trio of flame-throwing relievers. Heck, look at the Jays' Series-winning teams of '92 and '93, which, for all their star-studded lineups, would arguably have fallen short without elite closers Tom Henke and Duane Ward, and without the glaring failures of opposition relievers (bless you, Mitch Williams). An enduring memory of that '93 Series: the faux-homeless man in the Philadelphia stands, wearing a cardboard box that said, "Will Pitch Middle Relief for Food."

Of course, Anthopolous knows all that. And, in his defence, he would doubtless say that acquiring first-rate relievers isn't easy, that it would mean sacrificing some of the organization's highly touted young hurlers, which wouldn't be worth it given how notoriously fickle bullpens are year to year.

But it's also true that the Jays need to win now, with vets Bautista, Edwin Encarnacion and Jose Reyes aging and brittle, and with Gibbons's and Anthopolous's jobs apparently on the line. The team can hit, it's surer afield than it's been in years, but even in an up-for-grabs American League East, it can't make the playoffs – after more than two empty decades – with its mound of woes.

Anthopolous has done a curious thing here. He's sent his boys to the prom in a tux and shiny shoes but no pants, in a limo with a bar and TV but a wonky engine. There's no reliever to trust, nowhere to hide, and when the bullpen door opens, fans can get cramps from cringing.

After too much pain, they may just stop watching. 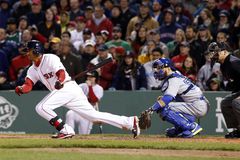 Far from a masterpiece, but Sanchez gets first win of season
May 12, 2018