He was known more as a defender than an offensive threat but Richard Urena, the slightly built Toronto Blue Jays rookie, has been making waves with his bat since ascending to the ranks of Major League Baseball.

The 21-year-old shortstop from the Dominican Republic has supplied some much needed sparkle to an otherwise tedious Blue Jays season in the two or so weeks he has been on the big league roster.

And on Tuesday night at Rogers Centre, in just his ninth MLB game, Urena experienced his biggest professional baseball thrill to date when he walked off the Baltimore Orioles at Rogers Centre.

The final score was 3-2 Toronto with the home side rallying for two runs in the bottom of the ninth inning and Urena providing the critical blow when he got the better of Baltimore closer Zach Britton.

"Of course I felt a lot of emotions and you dream about that [a walkoff hit]," Urena said afterwards, his words being translated by the club's interpreter.  "You come out here just trying to do your job and it's just a plus when get the chance to go there and win a game."

With Baltimore leading 2-1, Toronto catcher Luke Maile began the comeback when his line drive smash down the left side could not be corralled by Manny Machado, Baltimore's Gold Glove-caliber third baseman.

The ball squirted just far enough away that Kevin Pillar was able to dash home from third base to tie the game.

"You don't get many balls past Machado down there, that's for sure," Toronto manager John Gibbons said admiringly.

That set the stage for Urena and he delivered big time, taking a chest-high fastball from Britton and depositing it into centre that allowed Darwin Barney to ramble home from second base with the winning run.

"He's a closer, he throws hard," Urena said when asked what his approach was against Britton, a seasoned closer. "Anytime I go up there I'm just looking for a fastball up in the zone, and he gave me one. So I put a good swing on it."

The win was Toronto's fourth in a row and second straight over the Orioles, who are in the throes of a six-game losing streak. The Orioles can almost now kiss goodbye any hope they had of a late-season rally for one of the American League wildcard playoff spots.

Joe Biagini, who is continuing his audition to become a cog in the Blue Jays starting rotation next season, was tremendous, allowing just two Baltimore runs off six hits sprinkled over eight innings.

Afterwards, Biagini marked the occasion by going off on a six-minute stream-of-consciousness monologue when he met with reporters in the clubhouse – without the benefit of even being asked a single question.

"He was really good," Gibbons said about Biagini, referring to his performance on field and not in the clubhouse. "He really didn't use his breaking ball much. I think he used that quite a bit over there in Baltimore the last time he faced them. But just a good, live fastball. I mean, really, a dominating performance."

The only blip on Biagini's radar on the night was an eighth-inning solo home run shot by Tim Beckham that moved the Orioles in front 2-1. Other than that he was in control, inducing 14 ground ball outs along the way.

But most of the attention was focused on Urena, who had never played a game above Double-A with New Hampshire before he was promoted to Toronto at the beginning of the month when major league rosters were allowed to expand.

Urena, who batted just .247 in New Hampshire on the season, collected three singles in the Baltimore win to extend his hitting streak to five games. He has now reached base in eight of his nine MLB games while hitting a lofty .324.

Along with outfielder Teoscar Hernandez, another September addition from Toronto's Triple-A affiliate in Buffalo who had one hit on Tuesday and is now batting .313, the kids are doing alright in the Blue Jays lineup.

"Really awesome," is what Maile said about the infectious presence of the younger players. "It kind of changes the dynamic of the team and how we score runs lately. Those one run games, you're not so much relying on somebody hitting it over the fence. I think that's kind of refreshing, it's nice – not to say that you still don't enjoy the three-run homer because obviously that always plays.

"But manufacturing sometimes is a big momentum piece and these guys bring it."

As the Blue Jays limp on, catcher Russell Martin is eager to return
September 12, 2017 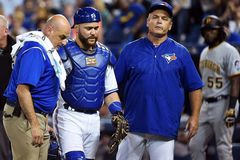 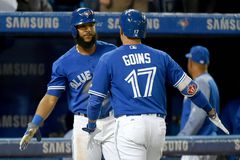 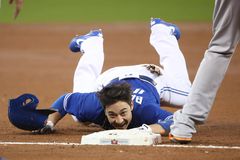