Numbers don't lie, but they are open to interpretation. So, too, is body language, which is why so many people misread the Toronto Blue Jays' Edwin Encarnacion for so long.

Just ask New York Yankees scout Tim Naehring, a good all-round third baseman for the Boston Red Sox in the 1990s and a former director of player development and minor-league field co-ordinator with the Cincinnati Reds. Naehring remembers his peers within and outside the Yankees wondering whether Encarnacion, the kid from the Dominican Republic with braces, wasn't a little too soft of body and short of intention.

"There were parallels between him and another guy we had, Juan Francisco," Naehring said this week, referring to an infielder dubbed "Fat Juan" early in his career. "I'd tell people: 'You're getting a bad read.' I mean, there are players where body language is a sign of something that relates to makeup. But there are others where it has nothing to do with it. Edwin's in that category."

You wouldn't know it from all-star voting, where Jose Bautista is flirting with a fan selection, but Encarnacion and Adam Lind have led the Blue Jays' charge into contention the past two weeks.

While Bautista has slumbered, Encarnacion has slugged five home runs, hit .333 and posted a .410 on-base percentage, including homering in Wednesday's 3-0 win over the Tampa Bay Rays. He has established residency in the power categories of the American League batting charts, and has stared down some demons, seeing time at third base in Brett Lawrie's absence after being used mostly at first base or at designated hitter.

Among manager John Gibbons's many revelations in 2013, Encarnacion stands out. In July of 2010, Gibbons had already been fired as Blue Jays manager when then general manager J.P. Ricciardi granted Scott Rolen's request for a deal at the non-waiver trade deadline. Toronto acquired pitchers Zach Stewart, Josh Roenicke and a somewhat pudgy Encarnacion from the Reds.

There was a sloppiness to Encarnacion's game, and as bench coach of the Kansas City Royals, Gibbons said not much was made of him because he didn't seem to be in the lineup when the teams met. By the time Gibbons returned last winter, Encarnacion was a regular. He hit 42 homers and posted a .941 on-base percentage last season in the first year of a five-year, $35-million (U.S.) contract that includes a club option in 2016.

Encarnacion said goodbye to the constant front-office turnover in Cincinnati that cost him some of his allies inside the organization, including Naehring and former general managers Jim Bowden and Dan O'Brien.

Encarnacion was put on waivers by the Blue Jays, claimed and then non-tendered by the Oakland A's, then re-signed by the Blue Jays in a six-week period, taking a pay cut of just under $3-million in the first year of a two-year deal.

Encarnacion said his eureka moment came in the 2011 off-season when he started working out with Luis Mercedes, a former major-leaguer who spends the winters working with hitters in the Dominican Republic. Mercedes wanted to know why Encarnacion kept reverting to a one-handed, helicopter swing on his follow-through.

"Luis just asked me, 'Why don't you use two hands?'" Encarnacion said. "I didn't know why. I've always just done it like that. It's what I told anybody when they asked. So we changed it and it's made my swing shorter and more powerful. Now, I give myself a chance to do some damage."

O'Brien, now with the Milwaukee Brewers and a former farm director of the Texas Rangers when the Rangers selected Encarnacion in the ninth round of the 2000 draft, said the Reds never corrected Encarnacion's swing "because he was able to generate power with it, even one-handed." And Encarnacion had five double-digit homer seasons in the minors and a 26-homer season in the bigs in 2008. He was also enough of a prospect that he appeared in two Futures Games, held in conjunction with the All-Star Game.

Before the adjustment, Encarnacion barely fouled off breaking or off-speed pitches, let alone make hard contact. Encarnacion made another change, too. He took himself and his game more seriously, losing a dozen pounds and committing to an off-season workout routine. Encarnacion also turned himself into a superior fielding first baseman after committing 78 errors in 490 major-league games for the Reds at third base. His footwork around the bag is up there with the best in the game.

Gibbons said it didn't take long for him to get an inkling about Encarnacion.

"Eddie's a guy who has had his ups and downs like a lot of us in this game," Gibbons said. "Seems to me he's one of those players who's no longer happy just to survive, he wants to thrive."

From what Jays fans have seen these past two seasons, it's tough to argue. Turns out Encarnacion's an easy guy to read, after all.

Notes: The Red Sox are 5-4 against the Jays, averaging 5.5 runs a game. … Entering Thursday's series finale against Colorado, Jacoby Ellsbury had multiple hits in six of eight games (.429, 15-for-35) and hits in 20 of 23 (.392, 40-for-102). … Also hot: SS Jose Iglesias had reached base in 27 straight games, hitting .430 with a .486 OBP during that span. … Lester will be making his fourth start against the Jays in 2013 (2-0, 2.05 ERA, 5 ER/22.0 IP). He has allowed 10 runs in his last two outings, against the Orioles and Tigers, in 10 2/3 innings. He threw a one-hitter against the Jays on May 10, is 2-0 with a 2.05 ERA in four starts against them this season and 13-7 lifetime, holding them to a .176 batting average in 573 at-bats. … Boston is hitting .295 as a team in June, and overall leads the majors in runs. The Sox rank second in both on-base and slugging percentage. … Jose Reyes, activated from the 60-day disabled list in time for Wednesday's game (leaving Munenori Kawasaki demoted), returned to the leadoff slot, and Melky Cabrera went to fifth from second in the batting order. Jose Bautista stayed in the second spot, where he's struggled of late, a double in the win over the Rays representing his fifth hit in 37 at-bats. Two of the hits have been critical, a homer to send a game against the White Sox into extra innings and a homer to win a game against the Orioles. … The Jays have won 14 of 17 games, including the 11-game win streak snapped on Monday. … The Red Sox' Clay Buchholz, accused by broadcasters of doctoring the baseball when he pitched against the Jays at Rogers Centre, last pitched in a game June 8 and is likely out until the all-star break with a neck strain.

With files from Tom Maloney 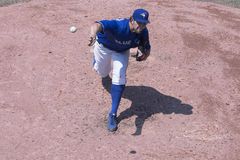 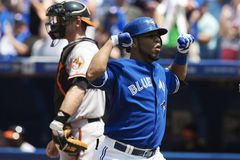 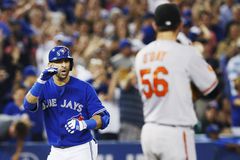 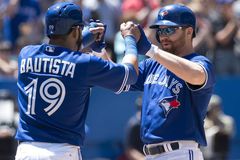