The pitching is in a shambles, the big boppers are in a fog and injuries continue to be a concern for the staggering Toronto Blue Jays.

And now they return home, tattered and torn, from a torturous 10-day road trip where they will somehow try to regroup for an important homestand against divisional rivals New York Yankees and Boston Red Sox.

"I'm going to stay positive no matter what," Toronto catcher Russell Martin said in the near silence of the Blue Jays clubhouse here at Progressive Stadium on Sunday afternoon. "I believe in what we have.

"I just think that there are times in a year where the pitching's kind of off and the bats need to step up. And there are times when our pitching is going to step up for us. Right now, we just need to put this behind us and just get ready for the next series."

That would be against the Yankees, beginning Monday night at Rogers Centre in the first of a three-game series. After that, the Blue Jays will welcome the Red Sox to Toronto for a three-game set over the weekend.

Regrouping will not be easy, not in the aftermath of what transpired here on Sunday afternoon when Drew Hutchison was staked to an early big lead only to see it all blow up in his face – again.

The Cleveland Indians were the benefactors of Hutchison's misfortune, punching out a 10-7 victory to earn a split in the four-game series.

Hutchison (2-0) was yanked after 4 1/3 innings, allowing six Cleveland runs off seven hits, his earned-run average now an unhealthy 7.47 on the year.

This was an especially tough one for the Blue Jays (12-14) to digest as it was a game that they led at one point 6-1 before things imploded.

And it marked a bad ending to a dismal road trip that saw the Blue Jays go 3-7.

Hutchison continued a disturbing trend of quick outings, failing for the fourth time in six games this season to record at least five innings of work.

"You'd like to chalk that up to one of those baseball days you can't put your finger on," Toronto manager John Gibbons said, trying to rationalize his team blowing a five-run lead.

"But it's been happening way too often, that's the problem. We've got to iron some things out and get better – there's no question about that."

Cleveland struck first, in the third inning, when Jason Kipnis launched a home run off Hutchison, his third of the season, to centre field for a 1-0 lead.

The Blue Jays responded in a wacky fourth in which they sent 10 men to the plate and scored six runs to take a 6-1 lead.

For Toronto, it marked the ninth time this season the team has scored four or more runs in one inning.

The club had won the previous eight games when that occurred.

The feature hit was off the bat of rookie Devon Travis, a grand slam off Cleveland starter Trevor Bauer.

For Travis, the home run was his seventh of the season and raised his RBI total to 23, both team highs.

After getting one run back in the bottom of the fourth, the Indians would ruin Hutchison's day in the fifth, in which they sent 11 men to the plate, scoring six times for an 8-6 lead.

The first four runs were the responsibility of Hutchison, who left the game with runners at second and third and one out for reliever Jeff Francis, who gave up a hit to Michael Brantley that scored two more and tied the game at 6-6.

Later in the inning, pinch-hitter Ryan Raburn doubled into the left-field corner; that brought two more runs, giving Cleveland the lead and saddling Francis with the loss.

Afterward, Hutchison was at a loss to explain his misfortunes this season.

"It's not good. Kills our bullpen even more."

Overall, Toronto's starting pitching as been atrocious as the Blue Jays came into Sunday's game with a 5.48 earned-run average, the worst among the league's 30 teams.

Hutchison's effort has now raised it to 5.69.

The only thing that has kept the season from being a complete debacle for Toronto is a solid offence that is leading the majors in runs scored, averaging 5.48 a game.

And you have to wonder how long that can be maintained, especially when you consider that slugger Jose Bautista, who is nursing a sore shoulder that has confined him to designated-hitting duties, is averaging a tepid .203 batting average.

Fellow bopper Edwin Encarnacion is faring only slightly better, his average now at .221 after getting one hit in five trips to the plate. 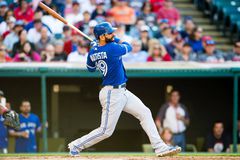 Jays demote Pompey after loss to Cleveland
May 2, 2015 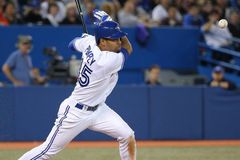 Buehrle knocked around again as Indians beat Jays
May 1, 2015 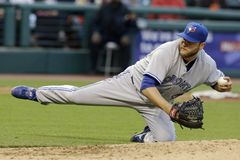