They captured the hearts and imaginations of Canadians from coast to coast with their big bats, their swagger, and a never say die attitude.

Friday night here at Kauffman Stadium, the magical ride came to an abrupt end for the Toronto Blue Jays who, despite the hitting heroics of Jose Bautista, could not withstand a late charge by the Kansas City Royals.

The feisty Royals would go on to earn a 4-3 rain-delayed victory over the Blue Jays to win the hotly-contest best-of-seven game American League Championship Series 4-2.

The Royals will now head off to the World Series for the second consecutive year and face the New York Mets, the National League champion, which will begin here on Tuesday.

The Blue Jays will be left to ponder a Major League Baseball campaign in which the franchise made huge strides, making the playoffs for the first time in 22 years, but a season that ended too soon in the eyes of many.

Bautista almost single-handedly propelled Toronto over the top in this one, clocking two home runs – including a huge two-run blast to left in the top of the eighth inning off K.C. reliever Ryan Madson that knotted the score at 3-3.

After the inning, the skies opened up that resulted in a 45-minute rain delay.

After the delay, the Blue Jays went with closer Roberto Osuna on the mound in the bottom of the eighth and things would not play out for the rookie.

Eric Hosmer then stepped into bat and he lashed a single that hugged the foul line down right field.

Bautista came up with the ball and instinctively threw to second base in order to hold Hosmer to a single. That was a misake.

Cain has great speed and as he was rounding third and noticed Bautista's throw going into second base, he turned it into overdrive and scored the winning run without a throw.

Making the setback even tougher to swallow, the Blue Jays lost with their supposed best pitcher, David Price, getting the start.

In fairness, Price deserved a better fate on this night, departing in the seventh inning with his team trailing 2-1 after holding the Royals to only five hits while striking out eight.

Price would struggle early and was tagged for home runs by Ben Zobrist in the first inning and Mike Moustakas in the second that provided the Royals with a quick 2-0 lead.

Ventura did a good job at holding the explosive Blue Jays in check until the fourth inning when Bautista crushed a mighty blow into the leftfield seats that cut K.C.'s lead to 2-1.

The game remained tight from there on until the Royals' seventh when Moustakas led off with a broken-bat single to centre.

After Ben Revere made an enthralling leaping grab at the fence in left field of a Salvador Perez drive that was about six inches from being a home run, it appeared that Toronto might escape the inning unscathed.

An Alex Gordon groundout followed moving Moustakas to second base and Toronto manager John Gibbons elected to go to the bullpen, calling on Aaron Sanchez.

Sanchez then allowed a hit by former Blue Jay Alex Rios that scored Moustakas to give the Royals some breathing room at 3-1.

Still, it was not enough to sink the Blue Jays just yet as Revere led off the eighth with an infield single to set the table for Bautista's two run blast that tied it.

With his team having already competed in four must-win games in this playoff run – three against the Texas Rangers and one on Wednesday against the Royals –Gibbons said he felt almost serene heading into yet another must-win on Friday.

"I think that it shows they don't fold, they're scared of nothing," Gibbons said before the game of the intestinal fortitude his team has displayed thus far.

Zobrist provided the early leg up for the Royals, electrifying the crowd of just over 40,000 when he clouted a 1-1 Price cutter over the wall in leftfield in the bottom of the frame for a 1-0 K.C. lead.

Then it was Moustakas's turn in the second that brought the score to 2-0.

A patron in the front row caught the ball and the Blue Jays immediately started to lobby for fan interference, arguing that the ball would not have left the field otherwise.

After an umpire review, the original call was upheld.

The Blue Jays finally started to make some noise in the fourth inning when Bautista crushed his first home run of the ALCS to left on a 3-1 Ventura fastball to cut the Royals lead in half.

Ventura's night came to an end in the fifth inning with one out and the Royals still clinging to a 2-1 lead. Ventura allowed four Toronto hits and one run over 5.1-innings of work.

A double by Encarnacion to left-centre brought K.C. Ned Yost out of the dugout, signaling for reliever Kelvin Herrera to come into the game.

Herrera did his job, retiring both Chris Colabello and Troy Tulowitzki to strand Encarnacion at second.

It was a pattern that would come to haunt the Blue Jays as they finished the game, going 0-9 hitting with runners in scoring position. 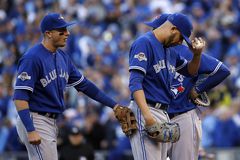 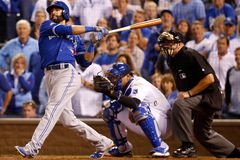