While officially bidding bon voyage to a franchise icon, general manager Ross Atkins laid out some of his plans to turn around the fortunes of the Toronto Blue Jays for the 2018 Major League Baseball season.

As baseball rolls into the excitement of the postseason, the Blue Jays find themselves sidelined from all the tumult for the first time in three years – and Atkins said he doesn't like the vantage point.

"It's obviously been a massive disappointment for us this year," said Atkins, who saw his aging baseball team plummet to a fourth-place finish in the American League East with a 76-86 record.

"The emotions you feel on a losing season are seemingly more intense than you [get] in a winning season," Atkins said. "You expect to win and it's been painful in many ways."

Atkins has already taken care of one difficult task – cutting ties with fan-favourite right-fielder Jose Bautista. Atkins confirmed on Tuesday that the club will not be picking up the mutual $17-million (U.S.) option on his contract next season.

While Atkins did not rule out the possibility of Bautista returning to Toronto down the road, the move was almost academic after the once-feared slugger hit just .203 on the season, with 23 home runs, while striking out on a franchise-high 170 occasions.

"We sat down, we met with Jose, a couple of weeks ago and made it aware that we would not be picking up his option," Atkins said while sitting down with reporters at Rogers Centre. "I don't believe in closing any doors and speaking in absolutes, but based on the construction of our roster, we feel he's unlikely a part of the solution moving forward."

At or near the top in almost every meaningful offensive category for the franchise during an overall splendid 9 1/2 seasons, Atkins said the organization will not forget Bautista's contributions.

"We want to make sure that when he comes back here, he can be celebrated in a very strong way," Atkins said. "That could be in the form of wearing a Toronto Blue Jays uniform again. It could be that he's traded or signed in the future at some point.

"But there will be a day where we'll make sure that we celebrate him in a significant way, knowing that he's going to be celebrated for years by the fans for his accomplishments."

As for the more immediate task at hand – making the correct moves in the off-season to make the Blue Jays a winner next season – Atkins is confident the job can be done.

"We feel like we can contend next year," he insisted.

At the top of his to-do list is acquiring one impact pitcher, be it a starter or reliever, and one impact position player.

The Blue Jays have several concerns to take care of before they return to the field next season.

Offensively, the team was a writeoff, the 4.28 runs scored per game tying the Blue Jays for fifth-worst overall in the 30-team MLB. Toronto ranked second last in both team batting average (.240) and hitting with runners in scoring position (.229).

Injuries were a big factor, as the Blue Jays lost more than 1,400 man-games to the disabled list, a franchise single-season record.

Atkins believes if the team's health improves, so, too, should the offence.

Troy Tulowitzki was one of those hindered by injuries, the shortstop was limited to just 66 games. Second baseman Devon Travis could only play in 50 games, making the middle-of-the-infield defence a bit of a project all season.

Even when he was healthy, Tulowitzki seemed to have lost a step defensively, but Atkins insists he is Toronto's No. 1 shortstop going forward.

"I think because of his leadership, there's things that don't show up in a stat line, or on a daily basis, as the way he helps a young pitching staff or a starting pitcher, the way he helps the infield and outfield around him," Atkins said. "He can still make a significant impact, and will."

And Atkins said he agreed with comments star third baseman Josh Donaldson made over the weekend that a little more attention to seemingly minor details such as base running could make a big difference. 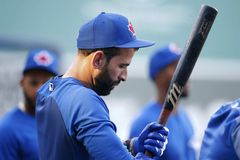 Twins look to turn the tables on Yankees in AL wild-card game
October 2, 2017 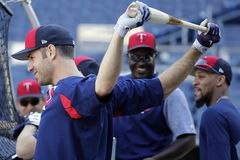 Aaron Judge takes swing at MVP and Rookie of the Year awards
October 3, 2017 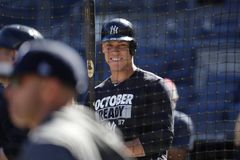