Drew Hutchison has performed like a bulldog on the road this season and a French poodle at home.

And if ever the Toronto Blue Jays needed a start from their pitcher with some dogged ferocity it was Thursday night at Yankee Stadium against New York.

Losers of 15 straight to the Yankees here in New York, an astounding run that dates back to 2012, the Blue Jays were desperate to mine just a smidgen of good fortune from what has been a pit of despair.

It was not to be.

After wearing Hutchison down on a sultry New York night with unwavering plate discipline, the Yankees (38-33) were then able to muster the offence to topple the punchless Blue Jays (41-33) 6-4.

With the win, the Yankees won for the 16th consecutive time over Toronto on their home turf and, more importantly, sweep the three-game series from their American League East rival.

A 4.5-game lead in the standing that the Blue Jays carried with them into New York is now down to 1.5, and the players are looking, and playing, like they're in a daze.

The Blue Jays have now lost seven of their last nine games, and their once-vaunted offence is now but a distant memory.

Thursday's setback marked just the fourth time in their last 13 outings that the Blue Jays have been able to score more than three runs.

"It's a big stage here and you've got to be able to perform," Toronto manager John Gibbons said afterward. "That's what the good teams who win do."

The Blue Jays announced that Liam Hendriks, who made two stars for Toronto in late May, is being summoned from Triple-A and will start Friday's game in Cincinnati against the Reds.

That start was supposed to go to R.A. Dickey, who came out of his last appearance in Baltimore on Saturday with a sore groin. Dickey will now be pushed back two days and start Sunday's game against the Reds with J.A. Happ throwing on Saturday.

Infielder Brett Lawrie, who was plunked on the left hand by a pitch during Wednesday's game against the Yankees, was unable to play on Thursday.

Lawrie said before the game that the hand is still just a bit stiff and that he expects to be able to play at some point over the weekend.

The Blue Jays also recalled the recently exiled Steve Delabar from their Triple-A team in Buffalo to fill the vacancy in the bullpen created when Brett Cecil (groin) was placed on the 15-day disabled list.

Hutchison has been a mysterious study when it comes to his body of work this season, home and away.

A pedestrian 1-3 pitching at Rogers Centre with a sizeable 8.72 earned run average, Hutchison has been much more accomplished pitching on the road, going 4-1 with a 1.79 ERA heading into Thursday's contest.

Gibbons was asked before the game if he any theories as to why.

"I got no idea," came his response. "Pretty amazing though. Who knows? Maybe he likes being the underdog or something."

The Yankees, as has been their custom throughout the series when it came to Toronto's starting pitchers, rode Hutchison hard from the outset.

Hutchison pitch count was ramped up to 76 through just three innings by which time the Yankees had constructed a 3-2 lead, all on sacrifice flies.

Hutchison did well just to last as long as he did, going 4.1-innings and allowing four of the New York runs off six hits to see his record drop to 5-5.

Melky Cabrera did not set a very good tone for the Blue Jays in the first inning after he stroked a one-out single off Phelps.

And when Jose Bautista worked his Major League-leading 55th walk, it appeared the Blue Jays had something brewing in the Bronx.

Cabrera quickly took care of that, getting picked off at second base for no apparent reason other than he could, and that helped snuff out a promising uprising.

Cabrera would atone for that miscue in the top of the third when he swatted a two-run home run shot for the Blue Jays, his 11th of the season that lifted the Blue Jays into a 2-2 tie.

With the Yankees leading 6-2 in the eighth, Edwin Encarnacion would launch his 21st home run of the season for Toronto in the that cut the Yankee lead to two runs.

"We've lacked some timely hitting," said Toronto's Jose Bautista, who reached the 1,000-hit career plateau with two hits in Wednesday's game. "Our pitching has been there enough, I think, that we should've won some of these games that we've lost.

"We just need to keep going on offence."

That is a difficult proposition when your offence can only muster eight hits in a game, which was their grand total on Thursday.

Before the game, Gibbons was talking about adversity and how the good teams, the ones that make the runs to the post season, are able to withstand the rough patches that invariably happen over the course of a 162-game season.

Gibbon was asked if he has seen some of those attributes with the Blue Jays during this tough time.

Rasmus hopes to provide boost on return to Blue Jays’ lineup
May 12, 2018 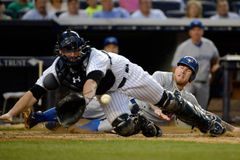 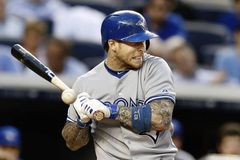 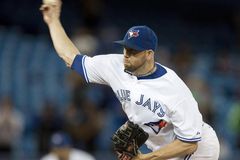 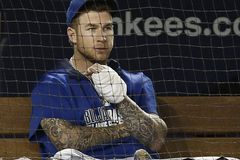 Former Blue Jays ace Ricky Romero has knee surgery, will miss rest of the season
May 12, 2018 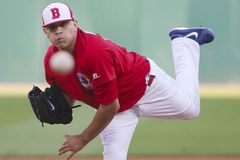