He might want to start out with a catcher. Seriously, as Toronto Blue Jays general manager Alex Anthopoulos awakes on a blustery Monday morning with no World Series to provide cover for his managerial search – as he hones in on what will be the most important hire of his career and, maybe, the most important managerial hire in club history – he could do worse than focus on former catchers.

Luckily for Anthopoulos, one of the names that has been linked most often with the Blue Jays job, Sandy Alomar, Jr., was a catcher. So, too, was Don Wakamatsu, John Farrell's bench coach with the Blue Jays these past two years and a former Major League manager with the Seattle Mariners.

With general manager's meetings scheduled for Palm Springs, Calif., on Nov, 6-9 the guess here is Anthopoulos won't want to waste time getting Farrell's replacement lined up. Anthopoulos has said he will review the interviews that led to Farrell's hiring – Alomar and Baltimore Orioles third base coach DeMarlo Hale were among those interviewed; Los Angeles Dodgers coach Tim Wallach was another candidate the team wanted to speak to, but were denied permission because of a contractual provision.

One veteran baseball man, who knows Anthopoulos and the Blue Jays, said last week that he believed Anthopoulos would lean toward hiring a candidate with a background in player development as well as coaching – much like Farrell – which could hint of Wakamatsu. But the Blue Jays brass also knows that this hire will be scrutinized even moreso than the hiring of Farrell, because few Blue Jays seasons have started out promising as much as delivering as little as the 2012 season. When Farrell left for Boston, telling everybody he had in fact told the Blue Jays in 2011 that he was interested in the job, Anthopoulos used up a substantial amount of his currency with the fan-base, media and most likely his superiors. Finding someone who has proven that he can manage a Major League team and has demonstrated tactical nous would seem to be an important consideration. For comparison's sake, in some ways Anthopoulos' choice needs to be more Jim Fregosi and less, say, Carlos Tosca. Whoever gets the job, this much is certain: the coaching staff will have a new look, with Pat Hentgen and Sal Fasano considered possible additions.

My personal choice would be Alomar - well, actually it would be Ozzie Guillen, but that's solely for my own amusement. There is a callowness about certain aspects of this team that makes me think having somebody who is not so far removed from playing might be an asset. Alomar has the pedigree and, from all accounts, the combination of gravitas and acumen that suggests he'd be a good manager. But he's no more proven than was Farrell.

So this is an important off-season for Anthopoulos. The free-agent pitching market is thin – Ryan Dempster of the Texas Rangers and Edwin Jackson of the Washington Nationals are targets, sources say, but the Blue Jays are under no illusions that either is a No. 1 starter and have resolved that they will need to put together a package based around one of their big three pitching prospects (Noah Syndergaard, Aaron Sanchez and Justin Nicolino) if they are serious about getting a front of the rotation starter. Catcher J.P. Arencibia has already been linked to the Texas Rangers in a trade and shortstop Yunel Escobar's value is higher than most people think, since the market at that position is razor thin.

Free agency began at 8 a.m. Monday, with teams retaining exclusive negotiating rights until midnight Friday. Other teams are not precluded from talking to free agents during these five days, but only the players previous team can re-sign him during the period.

Anthopoulos hates the messy, public and media relations part of his job. He'd rather he be able to go about his business quietly, in large part the result of a lesson learned when a trade for Tim Lincecum fell apart at the 2007 winter meetings because, Anthopoulos believes, both the Blue Jays and San Francisco Giants were too public with their discussions. But now that the games are over, the spotlight is on Anthopoulos. However long he has this job, it may never be more intense. 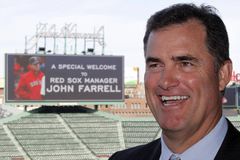 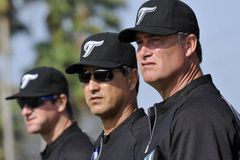 Tigers had little right to be playing for World Series title
October 29, 2012
Follow us on Twitter @globe_sports Opens in a new window
Report an error Editorial code of conduct
Due to technical reasons, we have temporarily removed commenting from our articles. We hope to have this fixed soon. Thank you for your patience. If you are looking to give feedback on our new site, please send it along to feedback@globeandmail.com. If you want to write a letter to the editor, please forward to letters@globeandmail.com.
Comments