On the day that Kevin Pillar expected to be drafted into major-league baseball, he gathered with a couple of friends in Los Angeles and headed off to a restaurant to wait for his name to be called.

They ordered some food and a couple of drinks and focused on the live draft coverage on television. The hours passed and Pillar's name never came up. He went home disappointed.

"I thought my college career was worthy of being selected," Pillar said. "And then it just got to a point where I said I didn't care what round, I just want to get picked, I just wanted an opportunity to play."

Pillar said he had almost given up hope that any team would show an interest.

The 2011 draft was now in its third and final day and Pillar was back at home, cooking breakfast. He was only half-heartedly monitoring the event on his computer when he learned that the Toronto Blue Jays had selected him – in the 32nd round.

Elation soon gave way to a feeling of unease as he filtered this development.

"In the back of my mind I was like – Toronto? Really?" Pillar said. "It can't be any further away from home. I mean, I just wanted to play.

"But when I thought about it, I was like, Toronto, of all teams, the only team in Canada, the team that is geographically the furthest away from my house."

For Kevin Pillar, nothing has come easy. He was always perceived as the long shot, the low draft pick that nobody ever expected to be able to materialize into much.

Now that an injury has afforded him the opportunity to establish himself as an everyday big-league player, the 26-year-old has seized the moment and is literally running – not to mention jumping – with it.

Installed as Toronto's everyday left fielder after Michael Saunders suffered a knee injury in spring training, Pillar has emerged as the Blue Jays' most impressive performer as the 2015 season courses through its second week.

Pillar is hitting a solid .282 with one home run through Toronto's first 10 games.

Combine that with several extraordinary defensive plays that remain on heavy replay on TV throughout Canada and the United States and Pillar is suddenly becoming a recognized name throughout baseball.

Number one in the highlight reel is an incredible, wall-climbing catch at Rogers Centre on Wednesday to snatch back a potential home run by Tim Beckham of the Tampa Bay Rays.

Sunday in Baltimore, Pillar came up with a dazzling, diving catch in foul territory for an out, just barely managing to keep his glove on in the process as he slid uncomfortably along the ground, to help preserve a 10-7 win.

Pillar's sparkling play, along with that of rookie second baseman Devon Travis, has been the surprise of the early season for the Blue Jays.

Pillar was 22 at the time of his draft, considered a bit old to be a bona-fide major-league prospect and a long shot at best to make the bigs. He said he used that as motivation to rise fast through the minors.

"It is a crap shoot when you're starting out, a lot of things have to go your way," Pillar said. "Not only do you have to perform you have to have opportunity."

Growing up in the residential L.A. neighbourhood of West Hills in the western San Fernando Valley region, Pillar tried his hand at everything he could, from riding dirt bikes to golf, tennis and beach volleyball.

In high school he played baseball along with soccer and football, where he played several positions, including slotback and outside linebacker, even though at 6-foot and not yet 200 pounds he was not physically imposing.

"I was undersized for my position but I knew how to hit," Pillar said. "It was either get hit or go hit someone and that was the mentality I took when I played football. It's still kind of the way I play the game of baseball now."

Pillar attended California State University, Dominguez Hills and in 2010 first put himself on the baseball map when he set an NCAA Division II record when he engineered a 54-game hitting streak, which still stands.

After he was drafted the Jays assigned Pillar to play in Bluefield, W.Va., in the rookie-class Appalachian League. Toronto provided its young outfielder with a $1,000 (U.S.) signing bonus.

After taxes, Pillar said he was left with roughly $500, which was not enough to purchase the new iPhone he had his eye on. "My mom gave me a little extra money to be able to buy it," he said.

Pillar did not help his cause last year after getting called up to Toronto from the team's Triple-A affiliate in Buffalo when he threw a tantrum during a game on June 24 at Rogers Centre against the New York Yankees.

Pillar was in the starting lineup and was 0-3 in a 6-6 game and slated to bat in the eighth inning with the bases loaded and one out.

He was already in the on-deck circle when Gibbons decided to send in Anthony Gose to pinch hit.

Pillar did not handle the moment well, tossing his bat in anger as he stalked back to the dugout. After the game, Pillar was optioned back to Triple A, a demotion he thought he might never recover from.

"I thought I'd burned a serious bridge here with Toronto," Pillar said, admitting he was wrong to react as he did.

More than anything he was scared that his major-league career had suddenly dried up, just two years in.

"It was terrifying," he said. "But as a man you've got to look at yourself, understand that you made a mistake and you've got to make changes. And I just went about my work. I wasn't concerned about if or when I was going to get called back up. I just wanted to put myself in the best situation if, for some reason, they came calling, that I would be ready this time."

Pillar was back up two months later, ready to show the Blue Jays he was a changed, more well-rounded individual.

A new batting approach, which included a bit of a front left-leg kick that teammate Jose Bautista has so popularized, helped Pillar hit a solid .289 over the final month of the season, setting the stage for his breakthrough in 2015.

But he is insistent he is not going to let a couple of crazy catches go to his head.

"It's been fun, to say the least," he said. "It's been crazy, it's been hectic. I'm just trying not to get caught up in one play or one week.

"There's been some pretty awesome plays, memorable stuff that I won't forget. But I've got to keep reminding myself that it's still early."

Blue Jays’ Pillar takes away homer with one of the greatest catches in franchise history
April 16, 2015 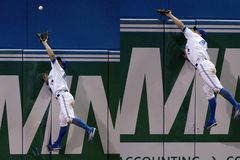 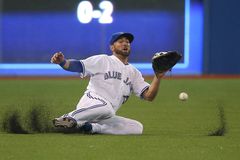 Kelly: Over distractions of Opening Days, Jays ready to settle into summer
April 14, 2015 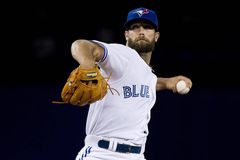