The Toronto Blue Jays do not really care how the wins keep on coming, as long as they keep coming.

Tuesday night here against the Texas Rangers at muggy Globe Life Park, the Blue Jays once again used the long ball to their advantage.

But trailing by one heading into the ninth inning, the Blue Jays took advantage of a combination of suspect Texas pitching, bad defence and some timely hitting by Troy Tulowitzki to eke out an unlikely 6-5 victory over the hapless Rangers.

"It was a good win," said Tulowitzki. "I think as a team we've been finding ways to win ballgames in a lot of different ways and tonight was one of those close games that we just found a way.

"That's what happens when you're playing good baseball."

And the bat of the Toronto shortstop, mostly dormant since his arrival just before last month's trade deadline, is finally heating up at the right time for a club in the thick of a playoff hunt.

Tulowitzki went three-for-five in the game and drove in a key run in the ninth and has now hit safely in seven of his last eight games, hitting .291 in the process.

The win for Toronto in the first of a three-game set against the Rangers was its fourth straight and pushed the Blue Jays' record to 70-55.

More importantly, the Blue Jays moved a full game ahead of the New York Yankees for first place in the American League East after the Yankees were routed 15-1 by the Houston Astros.

The Rangers had this one seemingly in hand, leading 5-4 heading into the top of the ninth with closer Shawn Tolleson on the mound.

But Tolleson was shaky, walking two Toronto batters to give the Blue Jays runners at first and second with two out for Tulowitzki.

Tolleson then delivered what everybody in the free world felt was ball four, including Tulowitzki, who tossed his bat aside and started heading for first.

But home plate umpire Mike Estabrook had other ideas, judging the pitch a strike and Tulowitzki had to set up once again in the batter's box.

"I just didn't hear any strike call," Tulowitzki said. "I heard the crowd kind of go crazy so I thought maybe they were frustrated they'd walked me. I threw the bat – I think it's the first time in my career that I've done that.

"I tried to keep my composure and put together a good at bat after that."

Two pitches later, with the count now full, Tulowitzki dinked a hit into shallow left field that scored Ezequiel Carrera from second base to tie the score.

Ben Revere moved to third on the play.

Revere would then come across to score the winning run when Texas third baseman Adrian Beltre made just an awful throw to first off a ground ball stroked by Josh Donaldson.

The throw pulled Texas first baseman Mitch Moreland off the bag and Donaldson was able to scoot in safely on the error, allowing Revere to score easily.

Toronto closer Roberto Osuna then came in to the game in the bottom of the ninth to record his 15th save.

Mark Buehrle got the start for the Blue Jays and he was so-so, victimized for five runs off seven hits, including two home runs in six innings of work, to see his record dip to 13-7.

"I pitched like crap tonight and the guys picked me up," said Buehrle, in typical forthright fashion. "Good thing about being a team game."

The teams started exchanging blows early, with Chris Colabello (his 13th, in the second) and then Jose Bautista (a two-run shot in the third) both going long for the Blue Jays.

The Rangers responded in kind with Rougned Odor clipping Buehrle for his 11th of the year in the second. That was followed up by Delino DeShields's second home run of the season leading off the third that tied the score at 3-3.

The Rangers shot in front 5-3 in the fourth that started with back-to-back doubles by Elvis Andrus and Odor, who drove home his second run of the game.

Edwin Encarnacion, with his 25th of the season, homered leading off the sixth to cut the Texas lead to 5-4.

For Encarnacion, the homer extended his hit streak to 20 games, the longest active steak in Major League Baseball.

Time not on Devon Travis’s side as Jays make playoff push
August 25, 2015 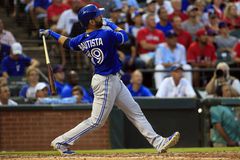 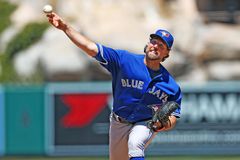 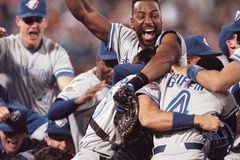