When Dalton Pompey was an impressionable young lad growing up in Mississauga – which was not that long ago – he would attend Toronto Blue Jays games at Rogers Centre – when it was SkyDome – every chance he got.

A fledgling baseball player, Pompey used to zero in on Vernon Wells after he grabbed a box of popcorn and settled into his seat. At the time, Wells was the Blue Jays' stalwart in centre field, and a team leader in the clubhouse.

"He was like the Jose Bautista of his time," said Pompey, 22.

Now, with the Blue Jays giving Pompey an opportunity here during spring training to earn the starting job in centre for the 2015 season, who better to lend a helping hand in the rookie's development than Wells himself? The 36-year-old, who retired from baseball following the 2013 season with the New York Yankees, was brought in by the Jays as a guest coach for three days this week.

His primary job will be to mentor the likes of Pompey and Kevin Pillar, considered the front-runners for the opening-day spot in centre.

But it is clear Wells's primary focus will be on Pompey, whose 17-game audition with the Blue Jays late last season convinced team brass that he deserves a shot at the starting lineup.

"I think he's kind of in a position right now where it's kind of his spot to lose," Wells said. "And with that mentality, you've kind of got to go out and try to dominate each day. I've been in that position, and it's a fun position to be in."

Aaron Sanchez started on the mound for the Blue Jays, and the Pirates threw up five runs over the first two innings, eventually hanging on for an 8-7 verdict over Toronto before a gathering of 4,593.

Devon Travis, who was obtained from the Detroit Tigers for Anthony Gose in an off-season trade – he's vying to become Toronto's new second baseman – grounded out with the bases loaded to end the game.

Sanchez, who is being stretched out as a starter in Florida but could very well wind up the closer, was not going to pitch more than two innings. But he lasted all of 1 1/3-innings after surrendering four Pittsburgh hits that led to five runs.

Only two of those runs were earned after new third baseman Josh Donaldson fumbled his first defensive play as a Blue Jay, failing to come up with a ground ball struck his way by Pedro Alvarez in the first inning. The Pirates took advantage of the error as the next batter, Jose Tabata, took Sanchez deep for a three-run home run that put the Pirates in front 3-0.

Later, Sanchez said he was satisfied with his outing. He said at this early stage of the spring, it is more [about] getting loose and feeling positive about his delivery more than anything else. "I think today was about just going out there and making sure that I felt good," he said. "The ball came out well all day. I felt like my pitches were a little bit straighter than I would like them to be."

The appearance of Wells was a bit of a surprise, as it was not something the Jays had advertised. He played the first 12 years of a 15-year career with the Jays, logging close to 1,400 games in a Toronto uniform. He was a three-time all-star and a three-time Gold Glove-winner who stroked 223 home runs, second-most in franchise history.

He spent some time with Pompey in the outfield prior to Tuesday's game during batting practice, getting to know his new student. He came away with the impression Pompey is there to learn. "And you want a kid who is willing to open his ears and not think that he's got it all figured out at the age of 22," Wells said.

Wells bumped around between the big leagues and the minors for three seasons before he stuck with the Blue Jays for good in 2002. He said his mentor back then was Carlos Delgado, the Toronto first baseman, and the two always exchanged tips on the pitcher they were facing.

Wells said he was able to take the knowledge gained from Delgado and apply it later on when another newcomer to the Toronto outfield, Alex Rios, came along.

"Alex," Wells laughed at the memory of his old teammate, now playing for the Kansas City Royals. "They'd bring someone out of the bullpen, and I'm like, 'Alex, what are you thinking right here?' He's like, 'I don't know, who is this?' I'm like, 'What do you mean?'"

Nevertheless, Wells said he was happy to pass on what he knew. 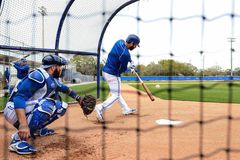 Sanchez has proven he’s a great closer, but can he start for the Jays?
March 2, 2015 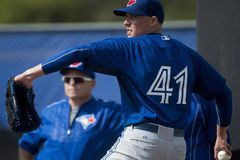 Delabar out to regain all-star form and be a force in Jays’ bullpen
March 1, 2015