Jason Grilli has a cache of fond memories from bygone days when he was growing up in Syracuse, N.Y., a huge fan of the Toronto Blue Jays.

It helped that his father, Steve Grilli, played in the Blue Jays organization for about four years.

The elder Grilli, also a pitcher, played the grand total of one game at the Major League Baseball level for the Blue Jays back in 1979 when he logged 2.1 innings in a game against the Boston Red Sox.

Now that the younger Grilli is the newest member of the American League club, obtained Tuesday night in a trade with the Atlanta Braves, he hopes he can start adding to his lasting memories.

On Wednesday night, the Blue Jays (29-26) put the finishing touches on a three-game sweep of the Yankees (24-28), scoring five runs in the seventh inning to rout New York 7-0 at Rogers Centre. Grilli made his Toronto debut in the game, facing just one batter in Carlos Beltran in the top of the seventh, getting him to pop out.

Edwin Encarnacion and Justin Smoak drove in two runs each in the breakout seventh for the surging Blue Jays, who won for the seventh time in their past eight outings.

"I'm very excited to be on a contending team and a team that I grew up watching, idolizing as a kid," the personable Grilli said, wearing the jersey of his new team while perched in the Toronto dugout late Tuesday afternoon. "It's kind of surreal for a minute. But it's sinking in and this blue feels good on."

The Blue Jays are hoping the good fit also spills out onto the field, particularly the troubled bullpen where the club is counting on Grilli's savvy presence to help smooth over what has been a bumpy course for the relief squad so far this season.

"We've got some proven veterans down there [in the bullpen]," Toronto manager John Gibbons said before Wednesday's series finale. "Veterans normally know how to survive."

Certainly that has been the case with Grilli, 39, a former MLB all-star as recently as 2013 with the Pittsburgh Pirates, one of 12 professional organizations he has played with since he was a first-round selection (fourth over all) of the San Francisco Giants in the 1997 draft.

Along the way, Grilli has bounced back from a myriad of serious injuries, including a stress fracture in his right elbow that led to Tommy John ligament replacement surgery.

He also suffered a knee injury that sidelined him for the entire 2010 season with the Cleveland Indians and then last year, he ruptured an Achilles tendon in July while playing for the Braves.

That put him out the rest of the season.

"That's about the all-star lineup of surgeries," Grilli said wryly. "I don't want any more."

Grilli said he used to come up to Toronto as much as possible to watch the Blue Jays play when his family was living in Syracuse, which used to be home for the Jays' Triple A minor-league affiliate.

"Through the heydays, the World Series teams and the battles against Oakland back in the day," Grilli recalled. "And I saw [Jose] Canseco hit a bomb up there" he said, glancing to the stadium's fifth deck above left field where the former Oakland A's slugger once deposited a mammoth home run ball.

"I've got a lot of good memories here, as a player and as a kid," he said.

In order to get Grilli, the Blue Jays had to give up Sean Ratcliffe, a Canadian pitching prospect who was selected in the 18th round of the 2013 draft. Ratcliffe was in extended spring training for the Blue Jays at the time of the trade.

To make room for Grilli on the 25-man roster, the Blue Jays optioned left-handed reliever Chad Girodo to their Triple A affiliate in Buffalo.

Gibbons said he is still not certain how he is planning on utilizing Grilli out of the bullpen. Roberto Osuna continues to shine as the club's closer and newcomer Joe Biagini has settled in nicely as a seventh- or eighth-inning option.

After coming back from surgery to repair his Achilles tendon, Grilli has struggled in the early portion of the season, with a 5.29 earned run average in 21 appearances with the Braves.

More recently, Grilli's numbers have started trending better, allowing no runs and just one hit in his past five appearances before the trade, holding opponents to a .063 batting average.

Whatever his role winds up being, Grilli said he is eager to contribute any way he can.

With sweep of Yankees, Jays finally playing to potential
June 2, 2016 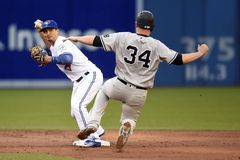 Jays acquire Grilli from Braves in bid to strengthen struggling bullpen
May 31, 2016 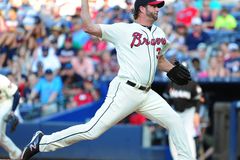 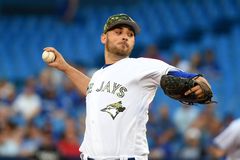