The Toronto Blue Jays are breathing a sigh of relief after the unveiling of the rosters for the upcoming World Baseball Classic.

As many as 11 Blue Jays were being courted by WBC teams to participate in the 16-country tournament, which is a sizable commitment for any Major League Baseball team. But when the final rosters were announced, just six Toronto players made the list – much easier to stomach for an organization where injuries, especially to pitchers, is a legitimate concern.

Leading the list is Roberto Osuna, the 22-year-old Toronto closer who has recorded 56 saves in the past two years and was a key ingredient in the American League team making back-to-back appearances in the postseason. Osuna was selected to play for Mexico, which will compete in Pool D of the event along with Puerto Rico, Venezuela and Italy.

The rosters for all 16 teams were rolled out during a live broadcast Wednesday night on MLB Network.

Canada, to be coached by former Blue Jay Ernie Whitt, will have outfielder Dalton Pompey on its roster. The 24-year-old Mississauga native is hoping to lock down a spot on the Blue Jays roster ahead of spring training.

One surprise with the Canadian entry is that Blue Jays catcher Russell Martin, who was hoping to play shortstop in the tournament, was not listed to play. Reports were circulating Wednesday night that his omission was over an insurance issue.

"It's unfortunate," Jays General Manager Ross Atkins said. "We know how much Russ was looking forward to playing in the WBC and representing his country as a Canadian."

Osuna will be joined on the Mexican squad by fellow Blue Jay Marco Estrada, another stalwart of the Toronto pitching staff who was an MLB all-star in 2016.

However, Estrada has been selected as a member of the Mexican designated pitcher pool, a new wrinkle in this year's WBC that will see national teams add as many as two pitchers after the first round of the tournament. The rule was designed to allow pitchers to play in the WBC without having to miss weeks of spring training with their MLB clubs. Under the pitcher-pool guidelines, Estrada will be ineligible to participate in the opening round and may only be called upon if Mexico manages to advance.

Two more pitchers for the Blue Jays made the grade, with Marcus Stroman and 20-game winner J.A. Happ being selected for the U.S. team, which will be coached by Jim Leyland. Happ has been added to the team's designated pitcher pool.

Jose Bautista, Toronto's slugging outfielder, rounds out the list of Blue Jays participants, being named to the team from the Dominican Republic.

The first round of the tournament will be held March 6-12, intruding on MLB's spring-training schedule in Florida and Arizona.

First-round games will be held at venues in Seoul, Tokyo, Miami and the Mexican state of Jalisco. Canada will play in Pool C at Marlins Park in Florida and will contest teams from the U.S., the Dominican Republic and Colombia. Canada's first game will be on March 9 against the Dominican Republic.

The top two teams from each site will advance after pool play to an eight-team second round, slated for March 12-19 in Tokyo and San Diego. From that, four teams will emerge and meet for the championship round, to be played at Dodger Stadium in Los Angeles. The final is scheduled for March 20-22.

This is the fourth iteration of the tournament. Japan won the title in 2006 and again in 2009, and the Dominican Republic took top honours in 2013.

Bautista happy to be back with Blue Jays despite offers from others
January 21, 2017
Jays GM Ross Atkins believes Bautista can return to all-star form
January 19, 2017 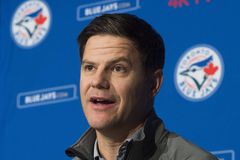 Roy Halladay, Vladimir Guerrero to join Canadian Baseball Hall of Fame
February 2, 2017
Follow us on Twitter @globeandmail Opens in a new window
Report an error Editorial code of conduct
Due to technical reasons, we have temporarily removed commenting from our articles. We hope to have this fixed soon. Thank you for your patience. If you are looking to give feedback on our new site, please send it along to feedback@globeandmail.com. If you want to write a letter to the editor, please forward to letters@globeandmail.com.
Comments