Emilio Bonifacio and Maicer Izturis have been competing for the Toronto Blue Jays' second-base job this spring with the notion that one would win out and the other would become a supersub.

However, it turns out that manager John Gibbons may not decide between the two players.

"It could turn out where we won't say, 'This guy is our second baseman,'" he said Sunday. "We could just use them both."

The reluctance to name a defensive starter actually offers a glimpse into Toronto's offensive strategy. The thinking is to mix and match players in the lineup according to the opponent's starting pitcher, outside the 3-4-5 slots in the batting order.

In what shapes up to be a tight American League East race, Toronto sees an edge in diversifying its offence with greater speed and more consistent contact. The Jays finished fifth in the American League with 198 home runs last year, but also fifth in strikeouts with 1,251.

"If you can put the ball in play and run a little bit, you don't always have to hit the ball hard [to score runs]," general manager Alex Anthopolous said. "You can force the other team to make an error, break a bat and still get a single, to keep a rally going. Home runs are great, they're guaranteed runs. But with power comes strikeouts and with strikeouts, you're a little bit more prone to slumps."

Bonifacio and Izturis are switch hitters with speed; Izturis is a much better contact hitter and Bonifacio the more dynamic base runner. Bonifacio has struck out once every five at-bats in six seasons, slightly above the major-league average, while in eight seasons, Izturis's ratio is slightly under one strikeout every 10 at-bats.

"We've talked about different scenarios back and forth with Izturis and Bonny," Anthopolous said.

For instance, Izturis could get the start against a strikeout pitcher such as the Tampa Bay Rays' David Price. Bonifacio might get the nod against a pitcher with a slow motion to the plate. With a tough lefty on the mound, both could make the lineup.

Bonifacio can play all three outfield positions and shortstop, though he prefers second base. Izturis has played second base, shortstop and third base, and served as a designated hitter.

"I love Bonifacio," Baltimore Orioles manager Buck Showalter said this weekend. "If they don't know it yet, they've got a gem. It doesn't matter where he plays, he can impact a game defensively in about four spots."

Their lockers separated by one, they have been forming a friendship during camp with no outward sign of rivalry. "I've been in the situation before with Anaheim," Izturis said. "It doesn't affect me. I just try to [be concerned with] what I can control myself. Anaheim had a lot of good players and I still played 100 games. I came here to help this team win."

Notes: Closer Casey Janssen, coming off shoulder surgery, faced four batters in a minor-league game on Sunday. How he bounces back from outings over these next two weeks will determine if he remains in Florida to continue his rehabilitation. Backup closer Sergio Santos reported feeling fine after a nine-pitch outing on Saturday against the Orioles. … Following an off day Monday, on Tuesday three of the five starting pitchers are scheduled to work, Mark Buehrle in a Grapefruit League game, R.A. Dickey and Josh Johnson in a minor-league game. … Reliever Darren Oliver intends to throw 35 to 40 pitches in an arm-strengthening exercise in the minor-league game. … Dickey, the knuckleballer, would prefer to throw to a designated catcher as soon as possible. If Henry Blanco, 41, wins the backup job over Josh Thole, 26, the question is whether Blanco or regular catcher J.P. Arencibia catches Dickey. … Oft-injured right-hander Dustin McGowan is out of options, meaning the Jays would have to expose him to other teams if he doesn't make the roster, so he's been added to the mix of pitchers competing for a bullpen spot, Gibbons said.

Happ unhappy with the prospect of demotion to Buffalo
May 11, 2018 Electrifying Gose must cut down on strikeouts
May 11, 2018 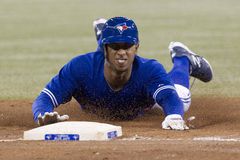 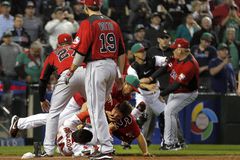 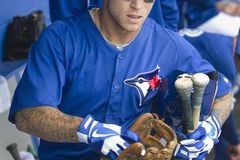