Torn between playing injured for his country or staying healthy for his team, Brett Lawrie opted to take off the Maple Leaf so that he won't miss any games with the Toronto Blue Jays.

A rib strain forced Lawrie off Canada's roster one day before the team's first game at the World Baseball Classic. Lawrie felt discomfort in his left side during an exhibition game against the Cincinnati Reds on Wednesday.

The third baseman is a former junior national team member and played for Canada at the 2008 Summer Games. Lawrie, who was visibly disappointed, said it was more important to rest as he watched his teammates work out at Chase Field on Thursday.

"It's tough for me but it's tough on everybody," said Lawrie.

"This is a situation that doesn't come around a whole lot, and just to have it kind of taken away just from something so small like this is frustrating for me just because I've worked so hard this off-season and this whole spring training to get myself ready for this."

Blue Jays general manager Alex Anthopoulos said the team expected Lawrie to be out two-to-three weeks "on the conservative side" and could be ready for opening day. A right oblique injury cost Lawrie two months with Toronto last season.

"I asked him about last year and he said what he had last year was 10 times worse than this," Anthopoulos said from Baltimore's spring training facility in Sarasota, Fla., where the Blue Jays were facing the Orioles in exhibition play. "But he knows obviously there was something there and he was smart to take himself out. He felt something going to his left on a groundball and felt something on a swing but he was smart enough having been through it to not take any chances.

"He'll be back on Monday, he'll get some more exams, but he said it has improved today. It's just one of those things that you need to rest. It's very mild, which is certainly good news, and they're saying two-to-three weeks on the really conservative side, which means there's obviously a chance that it's sooner than that."

The Langley, B.C., native said he made the mistake of trying to play injured last year and that he had learned from the experience. Playing a handful of games for Canada, Lawrie said, wasn't worth risking his major-league season.

"It needs time to heal," he said. "This is not something that can be healed overnight nor the next day. Only time will tell. So as of right now I'm still part of Team Canada but I don't think I will be competing in the first round, probably nor the next.

Anthopoulos said Lawrie's experience with injuries helped him make an informed choice on how to handle the rib strain.

"I think so because last year I remember it happened and he was like 'Oh, I just need a day or two. I'll play, I'll play through it.' He didn't realize, he didn't know what it was," Anthopoulos said. "Having gone through the experience, it was 10 times worse last year, and he missed about six weeks or something. The fact that it's mild, that he caught it early means he shouldn't miss too much time."

The loss of Lawrie is poor timing for Canada, which begins opening-round play against Italy on Friday.

Manager Ernie Whitt said there probably isn't time to find a replacement before the game. Milwaukee Brewers second baseman Taylor Green will likely move to third base, while first baseman Jimmy Van Ostrand could also see some time in the position.

"It's definitely a blow to this team, but sometimes in baseball you have things that you have to overcome, and hopefully we'll be able to overcome this," Whitt said.

Lawrie's news came the same day Reds slugger Joey Votto joined Canada for the first time. Votto, the team's best batter, had held out committing to Canada until Monday while he made sure his knee was healthy following surgery last year.

Instead Votto, and the game against Italy, became a sideshow to a team now missing a vital right-handed bat in the lineup heavy with lefties. Lawrie was just 19 at the 2009 WBC and only played as a pinch runner. Now a star with the Blue Jays, he was expected to make his mark at the international tournament.

"I just hope he gets healthy," Votto said. "This is a tournament that has some meaning, but ultimately his job and his obligation is to the Toronto Blue Jays. Hopefully a minor injury that doesn't keep him from making opening day and I imagine the Blue Jays hope the same."

Shawn Hill, who will start for Canada on the mound against Italy, said Lawrie's departure is discouraging to a team looking to make a breakthrough at the WBC. Canada failed to advance past the first round in '06 and '09.

"It's a loss," Hill said. "I don't know if you would say devastating because we still are going to go out there, we're going to play, we got our other bats. But no question it's a loss. I think just more disappointment. Frustration. Obviously disappointment for feeling bad for Brett. I know he wants to play and was looking forward to playing.

"So it's you feel bad for him, but hopefully we can go out there and pick up the slack for him and he can kind of enjoy it with us in that way."

Canada enters the game against Italy with bitter memories of the upset loss that knocked them out of the competition four years ago. Canada had pushed the United States in a 6-5 defeat, but lost its offence in a 6-2 defeat to the Italians.

Beating Italy on Friday will be paramount to Canada with difficult Pool D games following against Mexico on Saturday and the United States on Sunday. The top two teams in each pool advance to the second round in Miami.

Move on or go home, Canada will do it without Lawrie. He said he would stay to support the team before returning to the Blue Jays' spring training home in Dunedin, Fla.

"I just feel like I've kind of, not let them down, but in a sense that I want to be out there with them," said Lawrie. "I think I'm a piece of that puzzle and I really wanted to be in and just to kind of have something like this sideline me and what's going on is frustrating." 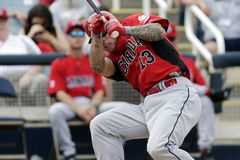