It was an old-time pitching matchup at Rogers Centre on Wednesday night when the Toronto Blue Jays sent Mark Buehrle to the mound to try to counter CC Sabathia of the New York Yankees.

And it certainly added to the old-time atmosphere with the roof being thrown open for the first time in the 2015 Major League Baseball season to allow the last of the day's brilliant sunshine to cascade into the concrete-and-steel fortress.

"Two wily veterans," Toronto manager John Gibbons would cackle before the game about the prospect of Buehrle, 36, going up against Sabathia, 34, two aging lefties with more than 900 games of major-league experience between them.

And while age will do wonders for whisky and wine, it tends to have the opposite affect on men who play games for a living.

And so it is with Buehrle and Sabathia, two pitchers nearing the end of fine careers wh are struggling to maintain the form that earned them so much fame and fortune.

And it was Buehrle (4-2) who would shake a rather large bogeyman off his shoulders, capturing his first win over the Yankees in 11 years as Toronto earned a concise 5-1 victory.

With the win, the Blue Jays (14-15) earned a two-games-to-one series victory over the Yankees (17-11), and will now square off against another American League East rival when the Boston Red Sox arrive in Toronto on Friday.

Coming off two worrisome outings, Buehrle looked to be back on track, although Gibbons is obviously treating him with kid gloves in light of recent struggles.

Buehrle was lifted after five innings with a 3-1 lead, his pitch count by no means worrisome at 77, having allowed the lone New York run off six hits.

The loss was hung on Sabathia, who is now 0-5 on the season. He lasted 6 1/3 innings where he allowed four runs off nine hits.

The dome was peeled back as the Blue Jays were taking batting practice. And the players loved it.

Toronto infielder Ryan Goins took off his cap as he was walking down the third base line and gazed upwards as the first rays of sunshine started pouring through the widening gaps of the retracting roof panels. In reverent fashion, he then raised both his arms upward to pay homage to the weather Gods.

The odds, meanwhile, were stacked against Burhrle even before he took the mound. He was coming off horrid outings in his two previous starts, when he was rocked for a total of 24 hits and 13 earned runs in 10 innings of work.

And the Yankees haven't exactly been warm and fuzzy adversaries over the years. Buehrle has won over 200 games in his career, but has a 1-14 record against New York in 21 career outings.

It did not look good early on for Buehrle. After disposing of Jacoby Ellsbury in orderly fashion in four pitches leading off the game, a single by Chris Young and a double by Alex Rodriguez left New York with runners at second and third.

Mark Teixeira then grounded out to first to move New York in front 1-0.

The Blue Jays responded in the second, counting three hits off Sabathia, including a single by Ezequiel Carrera that scored two Toronto runners and moved the Blue Jays in front 2-1.

In the Toronto fourth, Russell Martin proved to be a pain in the butt for Sabathia, drilling the pitcher in the backside with a line drive that caromed off for a single.

Sabatha was unhurt, but he would later allow Martin to move to second on a balk. Martin then scored after Chris Colabello singled to second to extend Toronto's lead to 3-1.

After a slow start at the plate, Martin has really warmed to his new team, hitting at a .385 clip (15-for-39) over his previous 12 games. He padded those totals on Wednesday with three hits in four at-bats, including a leadoff home run in the sixth for a 4-1 Toronto lead.

For Martin it marked the fourth consecutive start in which he has parked a long ball, giving him seven on the year.

Colabello, who made his debut with the Blue Jays on Tuesday after getting called up from Triple-A, collected four hits in the game, giving him six in two games. 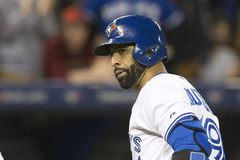 Estrada battles through first start for the Blue Jays
May 6, 2015 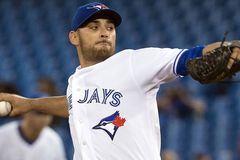 Jays offence stifled in loss to Yankees
May 5, 2015 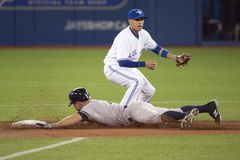